David Sands, professor at the Department of Plant Sciences and Plant Pathology, Montana State University, usa, hypothesized that there is a link between rainfall and bacteria in 1982. He didn't find many takers then. He has recently proved that bio precipitation does actually happen. He talks to Kirtiman Awasthi about the experiment and its implications 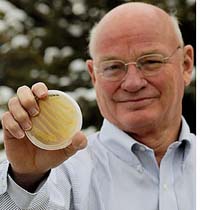 Findings
We have found that airborne bacteria may play a big role in the precipitation cycle. The bacteria act as nuclei around which ice forms. These biological nuclei can cause freezing at warmer temperatures.

Bacteria
There are three to four species of bacteria that are capable of ice nucleation. One of them, Pseudomonas syringae, is abundant in cool and wet season.The bacterium does not survive in hot (over 30c) and dry weather. Though a pathogen, it generally survives as a saprophyte (on the plant surface) without causing diseases. These are not pathogenic to humans or animals because they cannot grow at body temperatures. The bacteria are also found in ice and rain drops at higher altitudes, which indicates they play a role in bio precipitation.

Process
Bacteria multiply on the surface of plants and wind then sweeps them into the atmosphere. Water clumps around the bacterium, leading to rainfall. When precipitation occurs, the bacteria make it back to the ground. Even if one bacterium lands on a plant, it can multiply and form groups, thus causing the cycle to repeat.

Experiment
We tried to show that the process holds true by carrying out an experiment. We treated 28 tonnes of wheat seeds with a copper bactericide and planted it in 400 hectares of dry land during spring in Montana. We found the bacteria appeared on the crop. As there were rainstorms during that period, we decided to see if these bacteria were in the air above the field. We held out simple samplers from the window of a small plane which was flown over the experimental field. We were able to detect these bacteria as high as 2 km above the ground. In the lab we then determined that they were ice nucleation active.

Over the years
We didn't receive a particularly positive response from other scientists when we introduced the concept of bio-precipitation at a meeting in Budapest, Hungary, in 1982. In the past 25 years, the science pertaining to these bacteria has progressed considerably. There are dna tests for identification and their genetics are now better understood. There are now large computers capable of providing us with models of clouds and sophisticated forecasting and backtracking of storms. Dead Pseudomonas syringae have been used for 20 years in water cannons to enhance snow making for ski resorts, so we know that they do not just function as ice nuclei in the laboratory. But live bacteria perform better. We found that killing bacteria by boiling or adding enzymes does not lead to effective ice nucleation.

Precipitation patterns
There are two kinds of approaches to changing global precipitation patterns. One is to let them happen, and the other is to try to ask if we have been unknowingly affecting precipitation by overgrazing, cropping systems, etc. The next step would be to ask what can we do to avert any damage. People have been trying to modify weather for a long time, without much success. Perhaps it is because there have been these bit part biological players in the game.

Implications
A reduced amount of bacteria on crops could affect climate. Also, overgrazing in a dry year could actually decrease rainfall, which could then make the next year even dryer. Drought could be less of a problem once we understand how rainfall is linked to bacteria.

Spread extent
These bacteria have been found almost everywhere but we do not know the extent of their activities, ice nucleation or otherwise. We need to study weather patterns relative to vegetation that supports such bacteria.