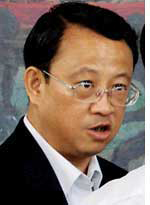 I don't know if you could call it sudden attempt. It should be called a renewed attempt on the part of our friends from some of the developed countries. Some of the eu arguments could be misleading. Of course we are all different. In the climate change context, we all contribute to fight climate change. But the specific actions we take would be different from one another according to our national conditions, respective capabilities, levels of development, technical knowledge capacities.In the 'common but differentiated' principle, when it was first negotiated and agreed upon in the early 1990s, the differentiation was well defined. It is between two distinct groups of countries. A group of countries which created the problem of global warming in the first place. And the other group, developing countries who suffer from this problem created by the developed countries. And over the past 10 years or so this has been the critical cornerstone supporting international cooperation in climate change. If you attempt to sabotage this very principle, the whole international cooperation to fight climate change would fall apart. I am confident that all of us in the G77+China are well aware of the importance of unity.

On Sino-Indian cooperation in climate negotiation

There are regular bilateral discussions between us. There are also close co-ordination and collaboration at international level. Whether it is convention process, or the g 8+ process, or major economy process, or regional conferences, or in the un, India and China have been working very closely and very effectively. Within the G77+China, there is wider scope of working together in the negotiating process. China is very happy that the Indian government and its people are taking climate change seriously. I was in the other room, couple of days ago, when the Indian delegation presentated the National Action Plan. It was a very positive and timely move.

China and India are emerging as major economic powers in the world today. So it is more important that we remain close in coordinating, collaborating at the international level on climate change among other issues.

On the sectoral approach initiated by the Japanese

Sectoral approach could be used by Annexe 1 countries to implement their targets and commitments. But some countries have been trying to distort this concept of sectoral approach by proposing a set of standards that would be applied across the globe regardless of different levels of development and capabilities. More critically, they want to use this universal set of standards to measure the performance of each and every country and then establish what the country needs to do for mitigation. This means that the burden of mitigation would basically fall on the developing countries. This goes against the 'common but differentiated' principle as developing countries lag behind the developed countries in technology and efficiency. I don't know if our friends in the developed world are prepared to go back to the original provisions in the protocol and in the convention as far as sectoral approach is concerned. As far as g 77+China is concerned, this effort to promote sectoral approach will not get anywhere.

On finance and technology transfer by developed countries

These two are of most critical importance. The way they are solved or not solved would determine the future of international co-operation to fight climate change. Transfer of finance is not to be looked as a charity. If we go back to the convention, the developed countries made two commitments, to reduce their emissions and to provide financial resources and technology transfer to support the developing countries fight climate change. In the last 17 years, nothing much has happened. Once you talk about financial resources, they say that there must be creative approaches to financing. There is the market and there is the private sector. But the commitment to provide financial resources were undertaken by developed country governments, not their business people, not their tax payers. When we talk about technology transfer, again they would say that technology is in the hands of private business. But it was a government obligation. Governments should work out ways to make technology transfer possible. There are different ways of looking at how these funds, once it becomes available would be managed through discussions. There is no point in talking about all kinds of methods of managing a lot of money that just does not even exist.

On the nature of financial transfer

On compliance of commitment

You could look at it from the legal perspective, but Kyoto protocol is essentially a political commitment. If by the end of the first commitment period, there are countries that fail to meet their commitments, I think the conference of the contracting parties to the convention would have to sit and look at what to do. And China would definitely be working actively within g 77+China to decide on this issue. But definitely, the key lies in 'political intent' as we say in Chinese.

There is a lot of discussion about what happens in 2050. But the Chinese position has always been to see what happens in the next few years, or 5 or 10 years beyond 2012. Long term is very nice to discuss but it is more important to look at what happenes within the first commitment period and in the five, ten, fifteen years beyond that. If you make nice statements about 2050 and then do not fulfill commitments in the next five years, that will be meaningless.

In my work, in the last few years, I have met considerable number of government officials, ngos, journalists in the developed world. One of the questions they kept asking was in reference to the amount of emission from China. The answer is very simple. It is all there in the convention. You cannot look only at the current emissions, you must also look at the historical cumulative emission, because that is the root cause for climate change and global warming. Number two you cannot look at the aggregate alone without looking at per capita. I cannot accept the argument that somebody from the developed world by birthright enjoys emission entitlement that is 3-4 times higher than me being born as a Chinese. So the answer to that is easy. You cannot compare a country of 1.3 billion people and a country with a population of a quarter of a million. You compare the two, the figures are there, but would that be a logical conclusion?

And a large part of Chinese production is exported to developed countries. That is why we insist that emission must be calculated from consumption side.

On road to Copenhagen CoP

I think China and India and rest of the developing countries believe that the Bali road map was achieved only after very difficult negotiations. We wish to see a good agreement in Copenhagen which would show the road after 2012. But it does not only depend on what we believe. We need good political intentions and seriousness from our developed partners. We must show up together, as an international community and be serious about our responsibilities about our commitments. Frankly, I am worried about some of the recent developments like the one you referred to earlier on about the sudden attempt to divide the developing world. All of us in this process should stick to the fundamentals of the convention and the protocol and not create new problems, new distractions, new definitions, and to try to reopen negotiations. That would be a disaster not only for Copenhagen but more importantly for this common fight against climate change.