‘EIAs of mining projects have become a farce’

Christopher Albin-Lackey, senior researcher with New York-based non-profit Human Rights Watch (HRW), has documented the large-scale environmental degradation and social cost of mining in Karnataka and Goa. Helped by a team of people, comprising individuals who are protesting exploitation by mining companies, he has put together a report—Out of control: mining, regulatory failure and human rights in India”. Anupam Chakravartty caught up with him in New Delhi before his departure to Goa for the release of his report. Excerpts of his interview: 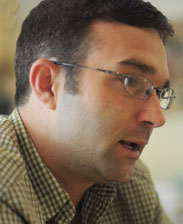 We conduct research in different countries, studying the impacts of mining on people. We look at human rights violations. Recently, mining scandals have been reported from across India. Beyond corruption, we wanted to look into the roots of such mining scandals being reported from the country. We picked up case studies from Karnataka and Goa where scams have been reported. We found that illegal mining has had massive impacts on the farming communities as crops are destroyed during the transportation of ores from these areas.

Besides this, we also found these people in these communities suffer from various respiratory diseases, while basic necessities such as water supply systems have been damaged.

On the other hand, government has failed to implement any of the regulations while the most important laws related to mining and its environmental impacts have been sidelined. The mandatory environment impact assessment (EIA) has been reduced to a joke. Implementing agencies of the government have no idea about verifying the claims made in the EIA reports by mining companies.

It has been observed that poorest of the communities reside in the most resource rich regions of India. How have you dealt with this in the report?

Yes, it is true most of the marginalised communities reside in the resource rich areas. The indigenous voice of these communities, as we found, are much smaller than the voice of the big mega projects which are planned in these areas. In our recommendations, we have approached these issues in pragmatic manner in order to safeguard the interests of these communities.

A proposed legislation, however seeks to empower these communities by letting them share the royalty for mining. On the other hand, the move might cause damage to the environment in these areas. What are your views on this?

In theory benefits from mining in the form on royalty is definitely a great thing. However, community awareness building about the environment should be initiated before opening the areas for mining. At the ground level, it becomes a complex system, in which large amounts of public money could be siphoned off by companies while sharing revenues with the local communities.

You spent about two years in Africa where widespread human rights violations have taken place because of exploitation of mineral resources by companies. How is your experience there different from the Indian experience? Do the companies there share profits with the local communities?

While there are similarities between India and Africa in terms of the kind of exploitation which has taken places in the mining and extraction activities, India has the advantage of having laws to check the corruption. Profit-sharing is perhaps the unique feature in India. However, these laws need to be implemented.

Could you tell us about the nature of recommendations in this report?

We approached the issue in the most pragmatic manner. The solutions that we have suggested are practical. On the other hand, many civil society groups have been raising these issues in the country, which will further strengthen the recommendations that we have made.

Why have you chosen Goa to release this report? Illegal mining is also rampant in other states such as Chhattisgarh and Jharkhand. What was reason for investigating Goa and Karnataka?

The newly elected government in Goa made a lot of noise during their political campaign before the elections to check on illegal mining and corruption in the state. We decided to release the report in Goa since we hope that the new government would take the recommendations seriously. However, a change has to happen in the Central government in safeguarding the people affected by rampant illegal mining.

While conducting your research and investigations, did you face any difficulties or threats?