Everyone is stealing germplasm

When agronomist Ralladoddi Hampaiah was advisor to the Russian government, he discovered how easy it was to take genetic resources out of India. And also how easy it was to bring in such material—bypassing quarantining regulations and other critical formalities. He once took 100 seeds of maize for testing to Russia from Delhi, and at Moscow airport he was grilled thoroughly about the seeds, their origin and certification. On his return from Russia, he brought in an enormous quantity of seeds, all of 15 kg, but was waved through customs! No questions asked. That was in 1993 before the international convention on biodiversity came into being. But not much has changed since then, although India has passed its own laws on biodiversity conservation and has regulatory systems in place, says the man who is now chairperson of the Andhra Pradesh State Biodiversity Board. Coming to the post after a long innings with private seed companies, most of it with Pioneer Seeds, a multinational owned by DuPont, Hampaiah has a clear understanding of how the industry works. Everyone is stealing germplasm, alleges the official who has been in the news for several controversial actions, including a case against Monsanto. In a freewheeling conversation with Latha Jishnu, Hampaiah says biopiracy is a major concern, but shortage of funds and experts are hampering the work of state boards. Excerpts: 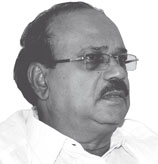 Why do you say our bio-resources are going out of India? We have laws to safeguard them.

It is not lack of laws but lack of understanding. Many of our ministries and departments don’t know the value of our germplasm. Till the mid-1990s, everything was exchanged freely. Look at the number of multinational companies (MNCs) that came to India because of our germplasm. It is all readymade for whoever wants to pick it from either the agriculture universities or research institutions in the country. Important germplasm resources we have are of sorghum, pearl millet, rice, cotton….Andhra Pradesh has a wealth of biodiversity and that may be the reason why we have hundreds of MNC operating in the state.

Is it all brazen theft?

No, the regulations also enable our germplasm to be taken out legally. Under Section 40 of the Biological Diversity Act, valuable material can be exported openly as “normally traded items”. It allows the Centre to exempt some items from the required permission from the National Biodiversity Authority (NBA) for use of biological resources. All kinds of germplasm are being sent out as “normally traded items”.

Who is sending out our germplasm?

Seed companies, pharmaceutical industry, researchers, just about everyone is stealing. The small seed companies steal from the big ones and the big ones get it from research institutions under various ploys after signing MoUs with them or with universities. No one declares the origin of the material. Other countries are particular about their genetic resources. In 1993, even before the Convention on Biological Diversity (CBD) was signed, I realised the difference in the way we treat our germplasm and other countries do. I took some 100 maize seeds to Russia when I was advisor to the government and they asked me for certification and other information. It was the same when I took out 15 kg of maize from Russia. The DNA of all the material is coded and registered and they follow the rules strictly. When I brought the seeds to India—and it was only to make a point—I was waved through customs. The plant quarantine officials were not present. So just to see how the system worked, I took the seeds to Faridabad where the office is located. They were taken aback and pleaded with me to take the seeds away quietly.

What is the way out?

Government should insist on a certificate of origin from NBA for all such items in addition to the phytosanitary certification. Every department should be sensitised to the value of our bio-resources, specially the customs. They have a major role to play.

Given these constraints, what have you done to protect biodiversity in Andhra Pradesh in the past six years?

We have taken a number of measures to spread awareness among the people by forming biodiversity management committees at the village-level and written to NBA about the trade in genetic material through the “normally traded” route. The regulator had no clue at the time about this. We had also filed a case for benefit-sharing against Monsanto for stealing the bacterium bacillus thuringiensis (Bt) from Mahanandi village in Kurnool district. (Bt is the most widely used bacterium in genetic modification of crops). Analysis of the soil shows that the bacterium comes from this area. We were claiming one to two per cent of sales revenue earned from the sale of Bt cotton (seeds) as royalty.

Are you saying Bt cannot be found anywhere else? What happened to the claim on Monsanto?

We have proved up to 99 per cent that Monsanto took Bt from Mahanandi. It did not contest this. But the case was not legally tenable because the notice to the US MNC was sent too late, in 2007. The germplasm was taken in 1992 and our regulation (BDA) came into force in 2002. The lawyers said the claim will now have to be fought in US courts.

Are there any other cases of biopiracy that you can cite?

Hundreds. In the case of Bt cotton, the germplasm was taken from Acharya Ranga Agricultural University in Hyderabad. What was used is a top quality variety called Narasimha. Unfortunately, the variety came into the public domain in 2004 when the registration period (18 years) ended. Similarly, so much rice germplasm has been taken away from the Directorate of Rice Research in Hyderabad which is a huge repository of our indigenous varieties. Nowadays MNCs are signing MoUs with it.

In the case of the Ongole bull, reports say the government gave a conservation award to a farmer for exporting its semen to Brazil at a time when Brazil is being accused of biopiracy. Doesn’t this undermine the board’s credentials?

No, that is not correct. The farmer was awarded for selling an Ongole bull to a Gujarat buyer for a big amount, Rs 35 lakh. Promoting this breed is a good example of conserving local biodiversity and creating awareness. I agree these bulls are taken to Bhavnagar for onward export to Brazil and other countries. But the problem is that the trade in Ongole bulls is huge. In a recent fair in Panama, a bull was on offer with a base price of Rs 3 crore. I have seen fancy catalogues of cattle fairs even in Australia where the Ongole bull is a prized breed.

So what is the Andhra Pradesh board doing about it? After all Ongole bulls have been traded for over a 100 years and are now an international breed.

I spoke to the CBD executive secretary Braulio Ferreira de Souza Dias, a Brazilian, about this issue. He said we should have a cut-off date—1993 when CBD was established—otherwise, it would become too messy if we delved too far into the past. Now, another breed, the Punganur cow (from Punganur in Chittoor district), is becoming important and we want to create awareness about it.

What can the board do about conservation?

Spread awareness and ensure fair benefit-sharing from the use of bio-resources as we did in Amarchinta village in Mehboobnagar district. We found that a local company was sending big shipments of neem leaf to Japan but was paying the villagers just Rs 20 per kg. We helped the local biodiversity management committee to get a much better price of Rs 100 per kg for the neem. But I must admit that if the Japanese buyer had not insisted on a certificate of origin and forced the local exporter to come to us we would not have come into picture.

The focus seems to be just plants. What about other species?

What can we do without funds? So far, we were getting just a sustenance allowance and had no place even to sit. There is little we can do on awareness and capacity building at the grassroots. Only now, on account of the Conference of Parties to CBD in Hyderabad in October we are getting Rs 8 crore.

That’s a huge sum. What do you plan to do with it?

We have been granted six hectares so we will start building an office and museum.