Faulted for raising a banner

At the recent World Water Forum in Istanbul, Payal Parekh and her colleague Ann-Kathrin Schneider were deported. She spoke with Bharat Lal Seth 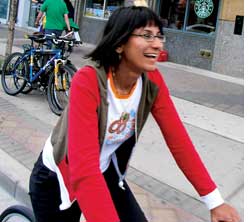 What was your point at the World Water Forum

We simply wanted to convey the destructiveness of dams. The World Water Forum was billed as a democratic space where global water policy would be debated. But this turned out to be a farce. The forum is organized by the World Water Council, a private organization whose most influential members are corporate water companies, some of the world's biggest dam construction companies and government agencies. This means that large trade organizations, such as the International Hydropower Association are invited to organize a number of official events, while non profits are given little opportunity to present their perspectives. We felt it important to combat the pro-dam perspective.

Worldwide, 40-80 million have been displaced by dams, many of them indigenous peoples. Dams are the single largest cause of displacement in India since independence. They are financially risky--most have cost overruns of 50 per or more and do not deliver the promised energy or water benefits. The planners of the Sardar Sarovar Project overestimated water flow in the Narmada River by 15 per cent, meaning that the canals are carrying less water than projected.

How did you protest?

My colleague, Ann-Kathrin Schneider and I unfurled a banner that read "No Risky Dams" at the opening session and chanted "No more destructive dams".

Why was your proposal for a side-event on dams rejected?

We were sent an email informing us that our proposal had been rejected due to lack of space. In fact, originally all dam-related proposals were rejected. Later a few were granted space, albeit at a site that was a shuttle ride away--the bus service itself had an unpredictable schedule.

Why were you detained and deported?

I don't know. We had not committed a crime. We were charged of trying to influence public opinion, but never received anything in writing. I think vibrant democracies can only function if people debate policies in the open.

At the airport, the police officer checking passports told my colleague Ann-Kathrin she was banned from entering Turkey for two years.

What was their line of questioning?

We were not really questioned. But were given a statement to sign. We refused since the document was in Turkish. Turkish activists organized lawyers for us, who then translated the statement. Since we disputed certain facts in it, the lawyers advised us not to sign the statement. Then a police officer recorded our statement. But he inserted a sentence which we had not said: 'We are sorry for what we did'. Once this sentence was removed, we signed.

How was the issue handled by the forum organizers?

Plainclothes police officers removed us from the hall and took us to a make-shift police station on the official grounds of the World Water Forum. A member of the forum was at this make-shift station. The World Water Council, the organizers of the forum, never denounced our arrest and deportation.

Coming back to the issue of dams, do you think that rehabilitation and resettlement of dam-affected people, if carried out in sincerity, is a solution?

There is a growing body of international standards protecting the rights of those facing displacement. But they are almost never upheld. This is because the project developers are still able to externalize the full costs of a project onto the poor. The evidence shows that rehabilitation and resettlement of dam-affected people are never carried out in sincerity.

What would you propose as a solution to meet energy and water needs?

The cheapest and easiest option to increase power supplies is to make existing power plants more efficient. Energy use can be made at least twice as efficient.

A vast rollout of low-cost, small-scale infrastructure, not megadams, can solve the world's water and energy needs. Solutions include supporting decentralized rainwater harvesting, improving soil productivity on rainfed lands, small-scale irrigation, and rural electrification based on small dams and other renewable technologies.