`Many regions in Asia will face a decline in food productivity'

Kundhavi Kadiresan, Assistant Director-General and regional representative for Asia and the Pacific, FAO, talks about how achieving the Zero Hunger Challenge will be more difficult in Asia 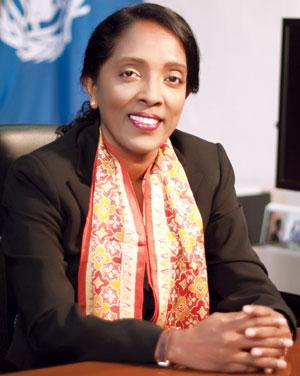 Two-thirds of the world's chronically hungry people live in Asia. Does this make the Zero Hunger Challenge more challenging in this region?

Every region has its own set of constraints and problems. In Asia and the Pacific, increased scarcity of land, water and labour are serious issues, in addition to climate change. Of course, meeting the challenge is particularly important in Asia because more than 60 per cent of the world’s undernourished people live here. However, if there is political will, and with suitable policies and targeted programmes, it is a goal that can be achieved in our lifetime.

FAO talks about the importance of attracting more youth to the agricultural sector. Do you think agriculture is a lucrative option for young people?

It is certainly difficult to make a good living in agriculture if you only have a small plot of land and if you are growing only basic cereal crops such as rice, maize or wheat. But there are ways to attract youth to agriculture. First, with emerging labour shortages, rural areas need entrepreneurs to help start up machinery service providers that can, for example, prepare the land or harvest the crop. Second, scientific research can help engineer better crops that are more nutritious and can withstand climate change. So when we talk about attracting youth to agriculture, we don’t want them to work simply as labourers.

Other options include growing high-value crops that can command a premium price in the market. At the same time, we mustn’t forget that farm households will want to expand into non-farm activities, both to earn more money as well as to diversify their income. Finally, we must live with the fact that there will be continued migration from rural to urban areas. We just don’t want it to be so rapid that it causes food production to decline.

To what extent will climate change affect agriculture in the future?

Climate change will have a significant impact on the future of agriculture. Let’s take one climate variable—temperature. The Intergovernmental Panel on Climate Change’s (IPCC) 5th Assessment Report says warming and increasing temperatures have been observed across Asia over the past century. In the case of crops, higher average temperatures will actually accelerate growth and development of plants. However, in the context of climate change, there are threshold temperatures above which crop growth will be inhibited and possibly lead to failure.

Take rice for instance. FAO’S research in Thailand indicates some regions are already experiencing average growing season maximum temperatures above a threshold of 34°C, which is resulting in some negative impacts on yields. This finding is supported by IPCC findings, which indicate there are a number of regions in Asia that are already near the heat stress limits for rice. Specific temperatures are important as well. Increased night-time temperatures have been found to have a significant negative impact on rice yields.

As far as the effect of rising temperatures on livestock is concerned, most species have comfort zones between 10-30°C. At temperatures outside their comfort zones, animals have been found to reduce their feed intake by 3-5 per cent per additional degree of temperature.

While the impact of future changes in climate on food production will vary by location, the IPCC has noted there is increasing evidence that many regions in Asia will experience a decline in food productivity. Though the precise impacts of continued warming are uncertain, the observed trends already give some indication of the serious climate risks we are facing and where we need to target future action.

This is the International Year of Pulses and the prices of pulses have been shooting up sharply across India. Do you think growing pulses is a riskier option compared to cereals?

The average pulse yields in India are much lower than the average experienced in other parts of the world. So efforts must be made to increase yields and to bring more areas under pulses cultivation. Last year, the FAO hosted a regional consultation on the promotion of pulses in Asia in Bangkok. The key message was that it would be sensible to focus on climate-sensitive varieties of pulses. Pulses are largely cultivated in rainfed and monsoon-dependent areas. So soil moisture is a critical factor determining levels of productivity. The production trends keep fluctuating every year depending upon rainfall. Some of the other constraints include biotic and abiotic stresses prevalent in pulse-growing areas, besides socio-economic factors.

But with vertical expansion of pulses, yield enhancement can be achieved by developing input-responsive and climate-resilient varieties of pulses, varieties with multiple resistance to diseases and insect pests, and short-duration varieties that fit well in the different cropping systems to increase the harvest index.

FAO's The State of Food and Agriculture report speaks about a programme in Bangladesh that gives poor rural women assets and subsistence income. Can such social protection programmes that empower women be replicated in other countries?

Many social protection programmes, including cash transfers, safety-net oriented public works programmes and asset transfers, target women as the main beneficiaries. Extending social protection to rural populations has a great potential to foster rural women’s economic empowerment and can lead to greater investments in child education and health. However, to tap into this potential, policies and programmes need to be gender-responsive.

India has a number of social protection programmes. Which ones can be adopted by other developing countries?

The well-known Mahatma Gandhi National Rural Employment Guarantee Act, as well as a National Health Insurance Scheme and a maternity benefit scheme offering cash assistance to pregnant women. These programmes, with suitable modifications to adjust to local conditions, can be adapted elsewhere in the region.

How can we improve and sustain mountain agriculture in the Asia-Pacific?

Since mountain areas are generally remote and have poor infrastructure, rural mountain producers cannot easily compete with lowland producers in mainstream agricultural production. The best way to enhance the livelihoods of mountain people is to focus on niche crops, highvalue crops and unique mountain products (whose name can be protected by using the system of Geographical Indications).

Why has FAO joined hands with Mars Inc?

Our partnership with Mars Inc is focused specifically on food safety data and traceability issues. More specifically, our collaboration will focus on reducing food safety risks related to mycotoxin contamination that is harmful for humans and animals. Mycotoxins can be produced by certain fungi and may be found in staple crops, such as maize, wheat and sorghum. Limiting the intake of mycotoxins is a critical factor to improve public health and animal health globally. We believe partnerships with global food manufacturers such as Mars Inc can strengthen our message that food safety is best achieved through effective public-private partnerships.

Southeast Asia has made rapid progress in reducing hunger and poverty. But why has South Asia progressed less rapidly?

Governments can promote economic growth by providing public goods such as roads, ports, schools and health clinics. It will also need to provide an enabling environment for the private sector (especially domestic firms) to invest and create employment, because the private sector will be the biggest investor in the economy.

But to have an impact on reducing hunger and poverty, agricultural growth in particular will be important, because agriculture provides employment to so many poor people and because food is by far the most important expenditure item for the poor. Agricultural growth can also be facilitated by investing in agricultural research and improved seed production systems. Finally, it will also be important to pay attention to health and sanitation, such as clean drinking water and access to toilets, which can have important effects on nutrition.