'Forensics can easily be used in wildlife' 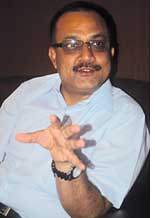 In February, 16 poachers were jailed for killing lions in Gir National Park in Gujarat, home to the only wild population of Asiatic Lions. Inspector general of police Keshav Kumar, who was with the criminal investigation department in Ahmedabad, cracked the case using dna fingerprinting and narcoanalysis. It was the first case of wildlife crime where cutting-edge forensics was deployed. Kumar, now posted at the Sabarmati jail, told Sumana Narayanan how he got on the trail of poachers

How did you get involved in poaching investigation?

Earlier, the case was with the forest department. Four lions had been killed. Then two more lions were killed. This was when the state government called us (cid). The government was concerned since poaching of lions was not common and generated bad publicity.

What did you find in Gir?

I camped there for a month and a half with forensics experts. We found carcasses of lions. The bones, claws and flesh had been removed. The skin was left along with internal organs. Apart from bloodstains on the ground, we found a matchbox which had Chameli printed on it and a bandage. There were food packets. We found three places were lions had been poached; two within the park and one in a farmer's field. The third incident took the death tally to 10. In all three cases the lions had been corralled and driven to a barricaded area.

How did you locate the suspects?

I don't know anything about wildlife, so I was at a loss on how to proceed. I had the information from the scene of crime but no people to connect it to, so I googled words like lion, poaching and bones. And through the search engine I learnt about the non-profit, Wildlife Protection Society of India, and its director Belinda Wright. I contacted her and she advised me on the kind of people who might have committed the crime.

Who were you looking for?

Belinda said it could be a tribe from Madhya Pradesh called Baheliyas or Pardhis since the Chameli brand of matches are sold only in that state. She also gave me a description of these people. They are good looking with hazel eyes, shabbily dressed and smelly. They travel by tempos, which they convert into houses. They camp along the roadside and have strange sounding names like Motarsingh. They also sell medicines and toys. And they often keep their poaching instruments and animal parts buried under the central pole of the tent.

How did you find them?

I sent a fax to police stations across the state, giving the information. I instructed them not to arrest them for poaching but under other offences, like selling medicines without a licence. We also told the police to question them on their movements for the past couple of months. The Junagadh police did a combing operation and arrested 45 women and children, and two men. They had traps, freshly cut lion claws and mobile phones. They were Baheliyas from Itarsi and Panna in Madhya Pradesh.

Did you analyse evidence?

While the police were looking for the Baheliyas, we had started analysis of the bloodstains. This had to be done in the Gandhinagar forensic lab. The lab confirmed the bloodstains were of Asiatic Lions. Once we had connected the matchbox to Madhya Pradesh and arrested the Baheliyas, forensics experts asked me to send their clothes and the scrapings of the underside of their fingernails. We found that the blood on the clothes and in the scraping was of a lion.

Was that enough to convict them?

A defence attorney would say this does not prove it was the same lion that was poached, so I went for dna fingerprinting of blood from the scene of crime, victim and clothes/fingernails. You remember the bandage we had found at the scene? That was a used bandage with some pus on it. We did a dna fingerprinting of the pus. When we arrested the suspects we checked if anyone had a wound. One of the men had a fresh wound. The lab matched his dna to that from the bandage. And once the triangle was connected--victim, criminal and scene--supporting tests were done. These included lie detectors, narcoanalysis and brain mapping.

And they were convicted.

Yes, 16 people were jailed for three years. Convictions came less than two years after the crime. This is very quick for wildlife cases. Till now wildlife forensics has been limited to identifying an animal by parts. Forensics can easily be used in wildlife investigation, but the forest department does not have the training to do a proper investigation. Coordination among forest officials, police and customs is also needed. We need a national database on poachers and traders, and exchange of information between states and countries.