‘Forest department is the encroacher’

When V Kishore Chandra Deo became the Union Minister for Panchayati Raj and Tribal Affairs three months ago, both the ministries were in inertia. Recently, the two have gained political profile, courtesy the prime minister’s mandate to revitalise the Forest Rights Act and ensure community governance under the Panchayats (Extension to Scheduled Areas) Deo speaks to Richard Mahapatra and Kumar Sambhav Shrivastava on the challenges ahead 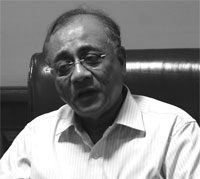 Panchayats Extension to Scheduled Areas (PESA) Act was enacted 15 years ago. Do you feel helpless because it has not yet been implemented?

As the minister of panchayati raj, my first job is to remind people about the existence of PESA. If need arises I can go for further legislation to ensure that states comply with the provisions of PESA. For this, I will talk to chief ministers and ministers in charge of panchayati raj activities.

How could states hold the implementation of PESA for so long?

Unfortunately, they have done this. It is a constitutional violation. Why and how I cannot answer.

You recently said no privately owned company should be allowed to mine in the Scheduled Areas. Please elaborate.

States have their own laws to prevent alienation of land in the Scheduled Areas. An individual cannot just go and buy land there. If a couple of people form a company and call themselves corporate, how can they be allowed to own and exploit mines in such areas? By allowing a private firm to mine, one is giving a go-by to the protection of land alienation acts.

What is your opinion on mining by public sector undertakings (PSUs)?

Even for PSUs I have my reservations visà- vis minerals and mines exploration. PSUs should do mining for their own consumption. By PSU, I mean a public sector undertaking that requires minerals for its own production and not the companies that trade minerals. 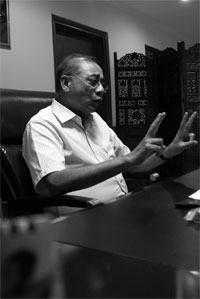 Are you suggesting that one should mine only for domestic consumption?

Minerals are our national wealth. Just mining and exporting raw mineral is a criminal act. There should be no outright mineral lifting for trade. Most developed countries mine the necessary amount and save the rest for future needs. India is still at a nascent stage of development. If we extract all our minerals today, from where will we get them when our economy takes off? We need to evolve a national policy on minerals.

In land acquisition compensation is based on the market value. How can this parameter be applied to tribal land?

If a tribal land has to be acquired, the first criterion is to give pattas (land titles) for the tribals under the Forest Rights Act (FRA). Otherwise, how will one know how much land is in whose possession? Secondly, under PESA the village will have to give its consent for land transfer. Here village means hamlet unit, not the panchayat. As far as compensation in tribal areas is concerned, it should be land-for-land.

You say FRA has not been implemented the way you expected. Explain.

Since the implementation of the Act began in 2008, I have noticed many impediments and difficulties. Many of them arise not from the Act but from the rules and gui delines. I am working to eradicate them.

And what are the key impediments?

There are many. For instance, there is a provision that says forest dwellers can transport the minor forest produce (MFP) only as head-loads or on bicycles. This is not a practical proposition. How much bamboo or tendu leaves can one carry on his or her head? One will have to use some other appropriate mode of transport. The purpose of the Act is to ensure that dwellers enjoy full rights over MFP. If they are not allowed to transport or sell MFP then the spirit of the Act is defeated.

Take community rights, for example. Pattas for community rights on forest resources are supposed to be given to the gram sabha. But they are giving these pattas to the Joint Forest Management (JFM) committees, formed by the forest department to protect and manage the land assigned to them. This is in contradiction to the provisions and the spirit of the FRA. The Act is my top priority. I will make sure such a distortion does not happen in the future.

How will you ensure that?

If the Act needs to be amended, I will go for it. If some problems can be sorted out by amending rules or giving directions, I will do it.

Do you think JFM is still relevant in the context of FRA?

In areas where FRA is applicable it is irrelevant. JFM is not about rights.

Is the forest department at loggerheads with the tribal ministry?

People complain it does not want to respect the FRA.

This needs to be settled. The Indian Forest Act came into being in 1927. So technically speaking, the date of birth of forests is 1927. But forest dwellers have been living there for centuries. In my view, it is the forest department that encroached the land of the original inhabitants of forests. By using a piece of paper coming out of a gazette the department cannot own the land.

Do you blame the forest department for non-implementation of FRA?

Non-implementation is too mild the term; they have been negative.

Do you think the Union Ministry of Environment and Forests is a hurdle in taking FRA to the next logical step?

Earlier it was. At the time I was chairing the joint committee on FRA many obstacles were created by the ministry.

However, it is receding now. The bureaucracy realises that this is a genuine cause and something needs to be done on forest rights front.

What’s your say on the department’s refusal to accept the MFP definition under FRA which includes bamboo and tendu leaves?

This is a settled matter now. Bamboo and tendu leaves are the two most lucrative MFPs. Forest departments have no locus standing on it. Now I just have to ensure the definition is implemented.

How will you ensure that rights to MFP are given to forest dwellers?

For MFP, the ministry is trying to prepare a package.

On the basis of the report by the T Haque Committee on minimum support price (MSP) for MFP and other representations, we are closely working with the Planning Commission and other ministries concerned to prepare a report. We will soon meet the secretaries of the states because they have a stake in this. Based on the consultations a cabinet note will be prepared for its approval within a month.

What are the provisions of the package?

This is still in the pipeline. The main intention is to ensure that forest dwellers get the optimum benefit out of the MFPs they collect and there is no exploitation by the middleman and state agencies.

Is it feasible to have MSP for MFP? We will have to make it feasible.