From the dirtiest to the cleanest: Mexico City’s journey

Mexico City is today recognised as one of the cleanest cities in the world, and the credit for this goes to Marcelo Ebrard Casaubon who recently completed his term as the city’s mayor. Affiliated to the Party of Democratic Revolution, Casaubon is a known figure in the climate change negotiations and is being seen as a strong contender in the next presidential polls in Mexico. He was recently in Delhi to attend the Delhi Sustainable Development Summit. In an e-mail interview with Ankur Paliwal, he talks about how he changed the face of Mexico City and why is it important to manage climate change at the regional level 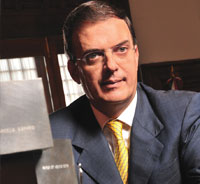 Twenty-one years ago Mexico City was rated as one of the most polluted in the world. What steps were taken to do away with the dirty tag?

In 1992 we had just eight days of good air quality in the whole year. I feel happy to say that last year we had 227 days of good air quality. The 20-year journey has been tough. The city took measures like relocating the oil refinery from the city, making verification of cars’ emissions mandatory twice a year, making it obligatory for cars to not circulate once a week, creating Environmental Metropolitan Commission to coordinate policies between Federal Government, State of Mexico and Mexico City, and monitoring of the air quality with stations that work 365 days a year and advice the community about measures to take when the air is not good.

Were these decisions difficult for your party? Did you face opposition?
Decisions to improve air quality are not very popular. Opposition parties were against introducing the prohibition on old cars from circulating on Saturdays once a month. They were also against the introduction of the mandatory school transportation programme. But with time the society has approved the measures because it can see the benefits in the air quality.

In 2008, Mexico City Climate Action Programme was launched with a target to reduce greenhouse gas emission by seven million tonnes by 2012. Has it been achieved? What is the plan ahead?

Mexico City has assumed national and international leadership in the struggle against climate change. In less than four years it has advanced in a marked and accelerated way to reduce greenhouse gas emissions. From 2008 till June 2011, Mexico City has achieved the reduction of 5,772,033 tonnes of equivalent carbon dioxide (tonne CO2eq). This represents 83 per cent progress in respect to the seven million tonnes goal. Of this, the transport sector alone has reduced 4,851,783 tonne CO2eq. We are firm to stay on this clean path.

The Mexico City Pact was signed in 2010 under your leadership, where climate change management at regional level was made a priority. Around 138 cities from across the world pledged to make their cities cleaner. What has been the progress?

The progress has been extraordinary. In November 2010, 138 cities signed the Global Cities Covenant on Climate. By November 2011, 207 cities joined. The number grew to 286 by November 2012. So the initiative is growing very fast.

By signing the pact, the cities commit themselves in 10 action points, including reduction of greenhouse gas emissions, creation of climate adaptation programmes and promotion of cooperation among cities. Today we can assure that in the international context cities will be leaders in the progress against global warming as they implement the main reduction of greenhouse gas proposals and adaptation programmes. As vanguard government, Mexico City will keep driving environmental policies with justice and equity.

Under the Mexico City Pact, cities have taken voluntary commitments for emission cuts. How do you ensure that the signatories are abiding by their pledges?

The cities make a commitment to report their achievements to the Secretariat and to the Carbonn Cities Climate Registry (cCCR), which compiles the actions of mitigation and adaptation of the cities and will be a mechanism that verify and measure those actions (see www.carbonn.org)

Much of the success in Mexico has been due to the overhauling of the transport sector. It was said that this sector was responsible for 44 per cent of total emissions in Mexico. Is it true that today 80 per cent of people in Mexico City use public transport?

Majority of the citizens are using public transportation now. Nevertheless, the economic growth of the city produces a high quality of life and more people want to use cars. This produces much more traffic and air pollution. We have increased the Bus Rapid Transit services network from 18 km to almost 100 km, and have constructed a new subway line that is the largest in Mexico (24 km). We have launched a bike sharing programme with 4,000 bikes in 260 bike stations. Introduction of 20 electric taxi fleets, renewal of 80,000 taxis with lower emissions technology and substitution of 4,000 micro-buses with high capacity buses are bringing about this change.

Our strategy to discourage the popular culture of buying cars is to increase the level of the public transportation service to make it more convenient and faster than the cars. Making parking expensive and establishing charges for cars to use the new urban roads also helps.

That is a federal matter. Nevertheless, we have asked the Federal Government to supply low sulphur gasoline and diesel to the city earlier than they do in other parts of the country, because we introduced Euro III, IV and V buses for metrobus service that requires low sulphur diesel to operate.

Mexico has a porous border with US which has resulted in thriving market for old, second-hand vehicles. How are you planning to deal with this problem because these vehicles undermine the new initiatives taken by the government?

That is also a federal matter. In Mexico City we make it obligatory for all cars to undergo emissions verification twice a year. Those cars that are old cannot pass the test and cannot circulate in the metropolitan area. Unfortunately, the federal government policy is too bad in this field because it has cancelled the taxes on import of old cars. It is true that the states in the border line are full of old cars without catalytic converters.

Mexico also had a smog alert programme which is associated with strong public advertising. What is its status now?

The automatic network for air quality monitoring works 24 hours and 365 days. We inform about air quality each minute online. Citizens are informed about the risks, measures to take and regions that have bad air quality in real time http://www.calidadaire.df.gob.mx/calidadaire/index.php

Is it true that Magdalena is the last ‘living river in Mexico’? How do you plan to rescue it? How much is it going to cost?

The Magdalena river and its tributary, the Eslava, are the last living rivers in Mexico City. Two centuries ago we had more than 50 rivers. They have disappeared with urban development. The Magdalena river rescue plan is to demonstrate that we are capable of restoring and recovering our ecosystems. Therefore we have invested US $35 million in the ecological restoration and rescued nine public spaces for the use of low income population on the side of the river.

It is being said that you are running for presidential polls in 2018? What vision do you have for Mexico and its people?

I think that the best objective of the party is to peruse equity in  human development. We have been growing but with a deep social and economical inequity. That causes youth not being able to identify opportunities. This increases violence and insecurity. Equity in human development needs to align all energetic, economic and social policies.