Internet-based technologies come at a cost—extensive energy consumption. A few technologies have been developed to reduce energy wastage during internet use and more are in the offing. Diego Reforgiato Recupero, winner of a Telecom Italia project on Green Home Gateway in Italy and co-founder of an innovation company R2M Solution, talks to Vibha Varshney about these technologies

How much energy do information and communication technologies use?

Around the world, data centres consumed over 270 terawatt hours (TWh) energy in 2012 and it is estimated that they will consume 19 per cent more in 2013. Estimates made in Europe show that in 2005, internet operators had an overall network energy requirement of 14 TWh which increased to 21 TWh in 2010 and might rise to 36 TWh in 2020 if no green network technologies are embraced. Telecom Italia used over 2 TWh of energy in 2006. This was around one per cent of the total energy demand of the country that year. The energy requirement for internet technologies in Italy has increased by approximately 12 per cent since 2004.

What are the technologies that can help reduce internet-related energy consumption? How efficient are they?

Current networks, devices and data centres do not have power management capabilities. Consumption remains high even when there is low level of internet traffic, leading to energy wastage. Some technologies are being developed to make these networks more efficient. “Smart standby” allows unused parts of a network to be put into very low power states and save energy. “Dynamic frequency scaling” ensures that when the system is under partial load, parts of it can be cut off without hitting overall performance. While these technologies still have glitches—smart standby makes the hardware take a long time to wake up—certain aspects have been identified that can be streamlined to take care of such problems.

Using these technologies, over 50 per cent of the energy being spent on internet traffic currently can be saved. Some industries like Cisco Systems Inc are already implementing greening techniques in their devices.

What kind of technologies are you working on?

At present, I am working on two projects for finding ways to reduce energy consumption. These are ECONET (low Energy COnsumption NETworks) Project and TREND (Towards Real Energy-efficient Network Design) Network of Excellence on Energy Efficient Networking. In ECONET, together with CNIT, Genova, Dublin City University and University of Catania, we have modified the router hardware design of NetFPGA, an open source hardware and software networking platform. The new design incorporates total five frequencies and allows for frequency switching based on load. This leads to slight increase in power consumption but we are trying to reduce this in future versions. 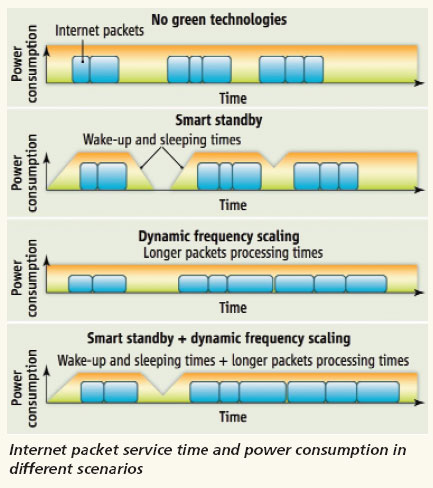 We are also looking at the possibility of automatically turning off Ethernet ports as this has higher power saving potential than frequency switching. To do that, we are investigating a rerouting technique that involves identifying multiple paths from a given source to a destination and deviating all the internet traffic towards only one path by turning off the others.

Who would put these technologies in place?

Both telecom industries and producers of electronic devices, like computers and mobile phones, need to work closely and develop new devices with energy saving features.

The next generation of devices would be able to set up and synchronise their energy-saving capabilities Analytical models would allow designers to calculate the temperature statistics of a device in advance and work to reduce it. This in turn would allow for a reduction of the size of hardware and cooling systems and would lead to reduced energy consumption.

What are the barriers to developing effective energy conservation technologies for internet services?

Once new green devices are built, the only barrier is that the old ones need to be replaced. This involves huge costs, depending on the part of the network we want to make green. If, for example, we want to replace the home router, the producer will have to build new green router and give it to the users. To reduce the costs, incentives from each country’s government and/or from European Union and so on would be a big help.