Ron Finley grows food and for this he has been branded as a guerilla gardener, a renegede, an ecolutionist. It all began four years ago, when Ron, a fashion designer, planted a vegetable garden in the open space outside his home in South Central Los Angeles in the US. It was illegal because the city council owned the open spaces. Ron got cited for gardening without a permit, but joined hands with other like-minded people and continued. At long last, the city council has changed its rules, allowing people to grow food in open spaces. Edited excerpts from an e-mail interview with Down To Earth: 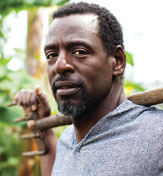 What inspired you to take up guerilla gardening?

The US had a strong tradition of community gardens during World War II. It got lost with the advent of modern agriculture. In the community I live in, there is no space for gardens. Well, there is space, but it is owned by the city authority. There is no access to food that has not been sprayed or injected with chemicals, so I decided to grow my own food.

Do you think children fall sick due to lack of fresh food?

Children are suffering from heart diseases, diabetes, obesity, asthma, attention deficit disorder and depression. You do not have to be a scientist to understand that a lot of these diseases are caused by food.

How did you popularise the concept?

In the past four years, I have founded a group with like-minded people who want to eat healthy food and share it with their neighbours. The group, LA Green Grounds, creates gardens in low-income areas. Recently, I gave a talk on gardening at TED (Technology, Entertainment, Design) conference, following which 300 volunteers have joined the group.

How have your eating habits changed?

As a child I ate what I was fed—packaged meal and canned corn. Then I educated myself about healthy food in my early 20s. Now I grow mustard greens, kale, arugula, spinach, mint, rosemary, onions, carrots, corn, eggplants, hot peppers. I also grow apples, almonds, tangerines, oranges and bananas, which are shared with neighbours in the street. I make juices and salads and eat corn off the stalk.

Yes. People are willing to spend on quality food, but they have to drive 45 minutes to just get a fresh tomato. The cost of organic food is prohibitive. So you need to grow your own food. It's like printing your own money.
Print edition Print edition Interview Interview United States Of … Organic Foods Organic Farming Green Spaces Gardening Down to earth Agriculture
Donate Now