A breakthrough for a rare genetic disorder

After 13 years of experiments and research, Indian scientist Surajit Sinha has developed a chemical formula to make medicine for Duchenne Muscular Dystrophy, which is effective as well as affordable 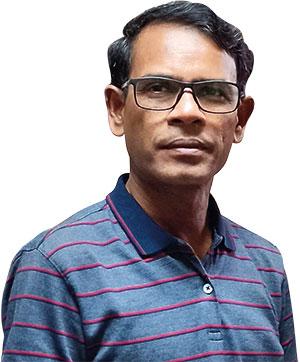 Duchenne Muscular Dystrophy (DMD) is a rare genetic disorder that has affected 0.8 million male children in India. DMD occurs due to deficiency in the manufacture of dystrophin — a protein located primarily in skeletal muscles — used during movement, besides in other organs such as lung, heart and in the brain’s nerve cells.

This affects their functioning. The symptoms include muscle degeneration and weakness, which goes on to affect various physiological activities of the patient including breathing and blood circulation.

The disease usually affects male children between the ages of three and 15. The patient is gradually forced to sit on a wheelchair due to limitations in movement. Usually, patients die by the age of 20. And treatment available is prohibitively expensive.

That became the challenge for Indian scientist Surajit Sinha. After 13 years of experiments and research, he developed a chemical formula to make medicine for DMD which is effective as well as affordable.

He developed this formula at the laboratory of Indian Association for the Cultivation of Science (IACS), Kolkata. Sinha, who is a professor at the department of School of Applied and Interdisciplinary Sciences, IACS, speaks to Moushumi Basu on his innovations, future of the treatment and challenges ahead. Edited excerpts:

What is the treatment available for DMD at present?

The available therapy in the global market is called antisense oligonucleotide (AON), developed by the US and European pharmaceutical companies.

There are two types of antisense therapies: Eteplirsen (Exondys 51) and Drisapersen. However, only Eteplirsen has been approved by the US Food and Drug Administration (FDA) for the treatment of this disease.

This drug is made by an organic chemical which is known as ‘Morpholino Oligonucleotides or Morpholinos’. The drug ‘Exondys 51’ is manufactured and supplied by Sarepta Therapeutics, USA.

FDA, on the other hand, has rejected Drisapersen due to limitations in doses and adverse effects. While it is not effective in lower doses, in higher or effective doses, the drug is found to have toxic effects on the patient, and hence is unsafe for use.

The other forms of treatments include physiotherapy and administration of glucocorticoid steroids to the patient. In these situations, there is no cure except keeping the disease under control and delaying its slow progression.

What would be the cost of treatment? Is it available in India?

AON therapy is exorbitantly priced ranging between R3 and R4 crore per year for treatment of a single child. The drug is thus beyond the reach of most Indian patients and their families.

There is presently no support for the treatment of this disease in our country. The Exondys 51 treatment is a specifically designed one; based on the target genetic sequence of the respective DMD patients. That is why it is called personalised medicine.

It is not a one-size-fits-all kind of a situation. All patients suffering from the disease cannot be treated with similar formulation in one go. The need of the hour is thus to develop other sources and targets for their production. Supply is also not easy unless large-scale production is launched.

What kind of treatment has been developed in your laboratory?

We have made two innovations. First, is the preparation of the chemical used for making Exondys 51 called ‘MorpholinoOligo nucleotides or morpholino’, with indigenously available technology. The second is developing a formulation that makes Drisapersen usable for the treatment of DMD by reducing its dosage and toxicity.

Please elaborate further on your innovation.

‘MorpholinoOligo nucleotides or morpholinos’ are used for gene silencing. They target the wrong gene and eventually control its functions. Exondys 51 has been made with this organic chemical. Our initial challenge was to prepare this since it was a patented technology.

However, my lab has been working on the preparation of this chemical since 2006. Finally, we could make it. Today, we are the only other group globally that knows how to do it. We received rights from the United States Patent and Trademark Office in 2018. However, we can make only a small quantity of 2 mg or 3 mg as we are a research institute.

This therapy has been approved also by the Drug Controller General of India (DCGI). We can and need to manufacture the drug in India and scale up its production to save our children’s lives. Parent forums are also coming forward to support this technology in our country. The initial assessment of the Indian drug indicates a pricing of about Rs 15 lakh annually, which is expected to go down further with bulk production.

There is also another drug called Drisapersen developed to treat DMD. However, it is required to be administered in high doses to the patient. This develops toxicity and it has thus not been prescribed by FDA, even though it managed to pass some of the initial pre-clinical tests.

We have developed a formulation for making this drug usable by reducing the requisite dose. The price of this drug would even be cheaper than Exondys 51. It is also easier to make this drug as compared to the latter, as there are standards available for preparation methods, unlike the personalised preparation in the case of Exondys 51.

What other applications can be derived from your research technology?

Since the modus operandi of our therapy is based on targeting the wrong genetic sequence, hence, the technique can be used for the treatment of diseases such as cancer, thalassaemia and diabetes. We are specially working on cancer in this regard. Our technology has entered in the personalised medicine era and there is huge potential. A day will come when our therapy will be saving the lives of cancer patients.

What challenges are you facing with regards to marketing this innovation in India?

We need to develop better infrastructure for manufacturing these drugs, especially morpholino — since it has already been approved by DCGI — on a commercial level. The whole process involves team work; a single person cannot perform this marathon task. For instance, we specially need a laboratory which can manufacture the injectable form of this drug. Inflow of money is obviously a constraint in this regard. Together with parents’ forums, we are trying to garner both technical and financial support for large-scale and commercial manufacture of this drug in India.

What is the government doing to address these problems?

There are different types of DMD afflictions. Yet, there is no system where such categories of the diseases can be tracked or monitored. We don’t have proper records of the disease. Since it affects infant males, parents need to be made more aware of the disease. They need to know who to approach for treatment and medical procedures when they detect early symptoms.

Even the available research facilities are poor. For instance, we do not have the MDX mouse model in India, which is used to study and investigate its symptoms on animals.

And more importantly, the situation is really pathetic when it comes to developing methodologies for making morpholino, which is the key drug component of the medicine, including its biomedical research and pre-clinical testing.

I am collaborating with a US scientist in this regard. We have, however, approached the government to assist us with such facilities for research and study.

This was fierst published in Down To Earth's print edition (dated 16-31 December, 2019)