How Bhutan is grappling with climate change

Ugyen Tshewang, secretary, National Environment Commission of Bhutan, speaks to Ankur Paliwal on the effects of climate change and how the country is trying to cope with it. Tshewang was in the New Delhi to attend the recently concluded Delhi Sustainable Development Summit 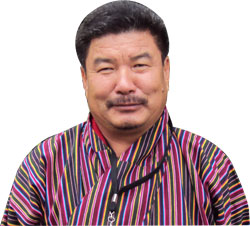 How is Climate Change is affecting Bhutan?

Our contribution to climate change is nil but we are bearing the brunt of it. The glaciers are retreating fast, causing flash floods. We no longer find the snow on our mountains which we used to around ten years ago. We have had two devastating flash floods so far, one in 1994 and the other in 2004. There is a clear sign of danger to nature and humans. Species are also getting lost. Sub tropical diseases which were unknown to us are beginning to emerge in the temperate climate of Bhutan. Mosquitoes are becoming a big problem in Thimpu, which never saw mosquitoes before. We are grappling with diseases never seen before in the region like dengue and malaria.

Agriculture is also bearing the brunt. The size of the land holdings is reducing because of erosion and degradation. Monsoon has become very erratic. Bhutan always had clear four seasons but now weather is quite unpredictable. There are very clear signs of cyclones and mini-cyclones, which were unheard of earlier because we are far away from the sea. All this is because of climate change, which at least we did not contribute to.

What adaptation or mitigation measures is Bhutan taking to deal with these challenges?

Transport sector is our main focus area. We plan to build extensive user-friendly public transport and discourage the use of private cars. The culture of buying cars is growing in Bhutan. There are already 60,000 plus vehicles for a population is just 700,000. We are planning to discourage it by putting heavy taxes on cars. We are coming up with ropeways, special pedestrian zones and user-friendly public transport infrastructure. We have also declared first Sunday of every month as a pedestrian day. No vehicles are allowed on roads on this day. We want to use Compressed Natural Gas in public transport but it is very costly for us.

In terms of energy, 99 percent of energy in Bhutan is renewable coming from small hydropower plants. For agriculture, we are researching and promoting resilient seeds. We have also identified six lakes which are in danger. We are working to save them.
As the ecosystem of Bhutan is very fragile, we have some non-negotiables which we cannot trade off with anything to stay firm on our goal of staying carbon neutral. For instance, keeping 60 per cent of Bhutan’s land under forest cover in perpetuity.

But most developing countries say that there is no money to implement adaptation and mitigation measures. What about Bhutan?

Bhutan has been very fortunate.  We are getting money from United Nations Framework Convention on Climate Change (UNFCCC). We have already implemented the first project on adaptation—Adapting to the climate change impact—with $6 million fund from UNFCCC. We are now in the process of starting another project on early warning signals. UNFCCC has committed $ 12 million for this project.

Tell us about this project

The impacts of climate change can be sudden and devastating. Cloudbursts can happen any time. The project is about ensuring that the communities get warning signals before the possible climate disasters. This also includes educating communities about how to prepare themselves in advance.  We are installing sensors that make a buzzing sound on sensing trouble. For example, if water level rises beyond a certain level, we get to know around 7-8 hours before it would cause any damage. This helps the government and communities to act in time.

We have also distributed mobile phone to the communities so that we can communicate with them, and they can communicate with each other in times of crisis. We have divided Bhutan into different zones depending upon their sensitivity to get affected by any climate hazards. We do not encourage settlements in high risk zones. But in case communities already living in hazard zones do not want to move out, we are training them in hazard preparedness.

Is it true that all the policies and projects in Bhutan have to pass happiness test before they can see the light of the day? What is this happiness test?

Unlike other countries, we believe that real development is not just about how good is your Gross Domestic Product (GDP). It is much more than that. In Bhutan, we have Gross National Happiness (GNH). The idea is simple: happiness is governed by many factors including psychological well-being, culture, environment and time value. Life is about balance. There are around 70 such variables that are strictly adhered to while framing any policy or passing any project. We have a panel of experts who ensure that every project that comes on the soil of Bhutan passes the happiness test. In Bhutan we are trying to understand how the new development paradigm should look like http://www.downtoearth.org.in/content/bhutan-pursuit-happiness.