'I cannot be a mute spectator to the carnage of Ganga'

As Uttarakhand grapples with the task of repair and restoration, octogenarian environmentalist G D Agarwal's fast to free Ganga of dams continues. He has been on fast for over 90 days now. The former IIT professor and environmental engineer, who is now known as Swami Gyan Swarup Sanand, started his fast on June 13 to commemorate the death anniversary of Swami Nigamanand who died two years ago http://www.downtoearth.org.in/content/g-d-agarwal-indefinite-hunger-strike-again. Thirty-two-year-old Nigamananda had died while fasting to protest illegal sand mining and stone crushing along the Ganga near Haridwar. Agarwal went on fast for the fourth time because despite repeated assurances of the government, 18 proposed mini and major hydropower projects on the Ganga and its tributaries have not been scrapped. Agarwal was declared critically-ill by the authorities because of fasting. He, however, spoke to Soma Basu about rivers, dams and the state conspiracy to eliminate him. He is at Haridwar's Matri Sadan ashram. 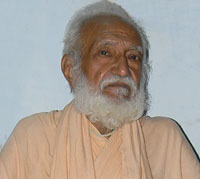 On his fast unto death protest

Ganga should be free of dams. It should flow free. I cannot just be a mute spectator of the carnage of river.

What is the use of it? On one hand, it (the court) gave a go ahead to Alaknanda Hydro Power Project, and then said no further clearance would be given to projects. It is important to understand that existing hydropower projects and the ones that have already obtained clearance are enough to dry up the rivers and play havoc with the ecology. So, the judgement doesn’t make any difference.

Well, orders are there. But who will ensure implementation? Who will monitor whether there is violation of court order? Bindal and Rispana, the two rivers in Dehradun, are almost finished. Jolly Grant Hospital, State Legislative Assembly are all built right on the riverbed. Nobody has the power to do anything illegal till they have the government's support. They are hand in glove in all illegal activities. The orders come each time a fellow files a petition. Each order, be it Allahabad High Court or Uttarakhand High Court, is area-specific and case specific.

Several activists are asking for River Zone Regulation to have a uniform policy to regulate activities in vicinity of rivers. Your comments

We had proposed a Special Conservation Zone for river Ganga from Gaumukh (Uttarakhand) to Gangasagar (West Bengal). In November, 2011, of the seven of the nine non-governmental members of National Ganga River Basin Authority (NGRBA) met in Varanasi. The plan was discussed and the proposal was sent to Prime Minister Manmohan Singh. Holy Ganga (conservation and management) Bill was finalised in December, 2011. But what is the use of the draft? The government proposed only those Bills in Parliament that it wants to. And the private Bills, they debate but never pass. Later, an IIT consortium took up the Bill. They studied it and disagreed. It went to IIT Kharagpur's law department. But what happened after that? Nothing.

You were taken to AIIMS recently because of your critical health.

I was taken away from the ashram forcefully. The people who called me “critically-ill” made me sit in police station for four hours on the 50th day of my fast.

On the treatment meted out to him by police

On 1 August, I was picked up by police from ashram and taken to Ranipur Police Station where a case was registered against me under Section 309A of CrPC. I was produced before the magistrate in police lines and was remanded in 14 days judicial custody. On August 2, I was admitted in AIIMS in New Delhi. I was there for a week. I was kept in ICU for four days, then shifted to general ward. From Aug 8, I was in jail. Senior advocates, KTS Tulsi and MC Mehta appealed in Supreme Court for my freedom. The court gave an exceptional order that I should be free on the condition that I do not take any “drastic step”.  The order came on August 19 and I was finally released on Aug 22.

On his treatment at AIIMS

They just tried to force me to eat. I am fine. All that the doctor prescribed everyday, even in ICU, were fruits and fluids. This fast is my tapasya. I just want that my religious right to have tapasya is not snatched away from me.

Swami Sivananda says you were taken to AIIMS to be killed like Nigamananda. Your comments

Yes. That could be true. Nigamananda was killed on the behest of mining lobby. I could be killed by the hydroelectric power project lobby. Right now, the person—I would not use the word enmity—who is most irritated with me is Vijay Bahuguna (Uttarakhand chief minister). I think Bahuguna has every reason and motivation to eliminate me from his path. After I returned to the ashram, nobody from the Centre or state came to ask me how I am or what happened. I was released from jail on August 22. Since then no doctor has come to examine my health though they had claimed I was “in a critical condition”.