‘India has not given due attention to food-borne infections’

Neelam Taneja is a professor at the Department of Medical Microbiology and in-charge of the enteric laboratory at Post Graduate Institute of Medical Education and Research (PGIMER), Chandigarh. In an email interview with Mouna Nagaraju, on the occasion of World Health Day 2015, she talks about food-borne and water-borne diseases in India, their prevalence and risks. Edited excerpts: 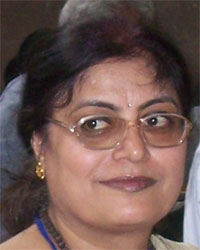 Which are the major food-borne and water-borne diseases that affect the population of India?

The diseases that we need to be most concerned about are life threatening ones like cholera, typhoid, viral hepatitis and Enterovirus infections like polio and rotaviruses. Many of the organisms causing acute infectious diarrhoea are food-borne or water-borne. For example, Shigella infections (organisms which cause bacillary dysentery) which cause high morbidity, illnesses caused by diarrhoeagenic agents like enterotoxigenic E. coli (ETEC), Enteroaggregative        E. coli (EAEC) and Enteropathogenic E. coli (EPEC). Diarrgoeagenic E. coli was found to be the most common agent, according to a recent study conducted by us, in collaboration with the World Health Organization (WHO).

Huge reservoirs of bacteria like Campylobacter and Salmonella exist in poultry. Though not commonly looked for, Shigatoxigenic E. coli, an agent that causes life threatening haemolytic syndrome is quite widespread in food of animal origin, as showed in an extensive surveillance study by our group (the study was published in journal Foodborne diseases and Infections).

How prevalent are these diseases? Can you describe some trends you have observed?

The numbers that depict the prevalence of such diseases in India are not known as there, unfortunately, is no separate record of food-borne illnesses. Most of these go unreported and uninvestigated. However, the laboratory surveillance data at our lab in PGIMER shows that the incidence of salmonellosis is going down as compared to what it was two decades ago. Bacillus cereus is an unlooked for pathogen but is responsible for quite a few cases of food-borne gastroenteritis. Diarrhoeagenic      E. coli are quite common, in fact many times mixed infections exist, in which case it is difficult to assign relative pathogenic roles. We get mixed infections of enterotoxigenic E. coli and Enteroaggregative E. coli, along with other pathogens like Vibrio cholera or Rotavirus.

Shigella infections are quite common and troublesome as drug resistance to ceftriaxone has also emerged apart from ciprofloxacin. Aeromonas infections may be related to eating contaminated fish. These organisms are generally not looked for by the laboratories.

What is the role that the government and other stakeholders in limiting the burden of food-borne and water-borne diseases in the country? Could you name a few interesting initiatives taken by both of them to ensure better food safety across the country?

There have been some initiatives, but we have not really focussed on food-borne infections on India. We do not have surveillance for food-borne infections like the CDC FoodNet or the European FoodNet. WHO has also taken some initiatives. But they are very few considering the size and complexity of our country. Many of the preventive issues are linked with infrastructural changes like supply of safe drinking water. Cholera outbreaks continue to occur even in the hearts of cities as the water supplies get contaminated with sewage. Due to overburdening of the cities, people install pressure pumps for their water pipes. As sewage pipelines are running parallel to water supplies, the sewage gets sucked in from minute cracks, thus contaminating water.

The public becomes an important stakeholder by reporting the cases. In a study conducted by us, in collaboration with WHO, we found that every year 1,400 to 31,000 cases of suspected food- and-water-borne infections were being reported at the district public health labs (DPHLs) across Punjab, Haryana and Uttarakhand. Every year one to three outbreaks of food poisoning reportedly occurred at the DPHLs.

How is drug resistance linked to food-borne and water-borne diseases?

It is very important is to realise that most of bacterial agents causing these infections have become resistant to many drugs, thanks to misuse and overuse of the antibiotics. Antibiotics are required only in cases where the patient is severely ill, at extremes of age, immunocompromised or there is threat to susceptible population (as in day care centre, prisons or refugee camps or disaster affected areas).
In our study conducted on prevalence of Campylobacter and Salmonella in poultry, we found extensive use of antibiotics in the chicks and birds. Six-day old chicks are injected with antibiotics which are used as growth promoters.

To conclude, I would like to say that diagnosis of these infections can be troublesome as may have to test some 15 or more agents. Point-of-care tests are required which can be used at public health labs. Molecular testing platforms have been approved by Food and Drug Administration, USA which could be highly useful. Some of these platforms are easy to use, as shown in a recent study published in Lancet Infectious Diseases.