Vishal Nath, director, National Research Centre for Litchi (NRCL), says there is no scientific evidence to prove that acute encephalitis syndrome (AES) in children is caused by litchi and that conclusions cannot be drawn from mere suspicions. Edited excerpts from an interview: 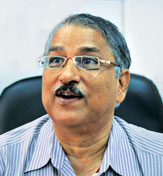 Has NRCL done any research on the link between litchi and AES?

NRCL promotes scientific cultivation of litchi. We do not do research on AES. But we have supported researchers from the National Institute of Virology and National Centre for Disease Control in finding the cause of the disease. Few months ago they carried out research to find out if rats and bats that eat litchi could spread AES.

What were the findings?

The findings were not shared with us. We were informed by other sources that no confirmed link could be established between litchi and AES. How do the reports on litchi causing AES affect NRCL and litchi farmers?

It is a matter of great concern. As a researcher I do not rule out that litchi can cause AES. But there should be scientific evidence. The media should be careful with its reportage. Litchi business was at stake this year because of these unconfirmed reports. Fortunately, it did not translate into losses. But the situation might worsen if the links are not disproved at the earliest. Farmers are also concerned. Many victims of AES are children of these farmers. They are equally worried that the crop they cultivate could kill children.