'It is strange that government promotes products which directly cause cancer'

Pankaj Chaturvedi, associate professor and head and neck cancer surgeon at Tata Memorial Hospital, Mumbai, was recently honoured with the Judy Wilkenfeld Award for International Tobacco Control Excellence in recognition of his innovative leadership in the fight to reduce tobacco use and tobacco-related diseases in India. He also received the WHO Director General award for leadership in cancer control in India. In conversation with Kundan Pandey, Charturvedi talks about his campaign and the irony in the Indian government’s approach to tobacco use promotion and public healthcare. Excerpts 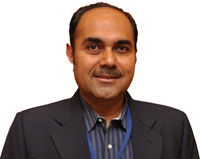 How serious is the problem of tobacco consumption in India?

Almost 27 crore people in India consume tobacco in different forms. As per various studies, every third person who consumes tobacco loses his life, which makes about 90 million people vulnerable. In India, around one million people die every year because of tobacco consumption. Around 50 per cent of cancer cases observed in the country are related to tobacco use. Millions of widows and orphans are being produced by the tobacco industry every year.

On initiating the “Voice of Tobacco Victims” campaign

While serving in Tata Memorial Hospital, I thought, why should we not make people understand the repercussions of tobacco consumption with the help of victims? This is what led to the formation of “Voice of Tobacco Victims” in 2009. I asked around 250 patients in the hospital to tell their stories to the media, to leaders and officials. The media took up the issue whole-heartedly and the health of these patients then became a political issue. In 2011, we began a nationwide campaign for a ban on gutkha through “Voice of Tobacco Victim”. We adopted different strategies for different states, and met ministers, officials and chief ministers. Now 29 states have banned gutkha.

A certain group says there are many cancer-causing toxins are present in the environment and tobacco products have no direct connection with cancer. What do you have to say

There are many things in our surroundings which harm us, but can benefit people if used moderately. Even alcohol has some sort of positive use in medicine manufacturing. But these tobacco products have no positive use. The question becomes why we are producing tobacco products. And the answer is that there is an industry which is ready to do anything for money.


Recently, the chief minister of West Bengal, Mamata Banerjee, sounded as if she was promoting tobacco consumption.  A couple of days ago, Uttar Pradesh government also slashed value added tax on cigarettes from existing 50 per cent to 25 per cent? What is your view on these developments?

When a person becomes a cancer patient, governments spend a lot of money directly or indirectly. They give a subsidy on health facilities. This is why it is strange that they promote items and substances which directly cause the disease. This is nothing but the result of lobbying by the industry.


What is the approach of the government towards prevention of tobacco-related diseases and their cure?

Prevention is better. But here the picture is a little different. In the 11th Five Year Plan, the government spent Rs 471 crore on the National Tobacco Control Programme (NTCP) while it spent Rs 2,400 crore on National Cancer Control Programme (NCCP) and Rs 1,600 crore on the National Programme on Prevention and Control of Cancer (NPPCC), separately. In this way, the government spent Rs 4,000 crore on cancer. If human loss is considered, the figure will go higher. In 1999, a committee of the Indian Council of Medical Research (ICMR) estimated a loss of Rs 30,000 crore on health expenditure due to tobacco consumption. Loss of lives must have been high in that year.

Experts believe that illiteracy is directly related to tobacco consumption. Even data says so. But the fact is that many literate people smoke frequently. Do you think literacy makes a difference?

Tobacco consumption usually begins during the teenage years, which is a time of rebellion. The youth are drawn to doing risky things, and by the time they become mature enough to understand the reality, they are already addicted.

The Cigarettes and other Tobacco Products (Prohibition of Advertisement and Regulation of Trade and Commerce, Production, Supply and Distribution) Amendment Bill, 2012

Tobacco taxes: a win–win measure for fiscal space and health

WHO report on the global tobacco epidemic, 2011: warning about the dangers of tobacco