Bluntness marks Ashish Bose who has destroyed more myths about India’s development and population growth than anyone else. No government, says the country’s foremost demographer, is capable of tackling the population problem because it is incapable of understanding the issue or doing anything about it. Since the infamous nasbandi (sterilisation) programme of Sanjay Gandhi which led to the defeat of Indira Gandhi in the 1977 election, governments have been afraid to take the problem head on. In an interview to Latha Jishnu, Bose minces no words in dismissing the current fixation of the government—and the world —with India’s demographic dividend. This is a term used to describe the period when a greater proportion of the population of a country is young and in the working age-group. This enables the state to cut spending on dependants and is expected to spur economic growth. But, far from providing a dividend, the number of the young in India will be a demographic nightmare, he warns. “We have millions of anguta chhaaps (people who sign with their fingerprints because they are illiterate) and what is the outlook for them?” Bose, 82, pioneered the study of population at Delhi’s Institute of Economic Growth (IEG) where he headed its Population Research Centre for decades. He has sifted through enormous amounts of data, classified and segregated it, and written dozens of books and magazine articles that have helped us understand how and where our numbers have grown and why. But the emeritus professor’s forte is not just numbers. He is a sharp observer of economic and sociological phenomena and a great believer in field research. Once, when he lay ill in a Delhi nursing home, he stated a survey about Kerala nurses that uncovered eye-opening facts about their social and economic profile. Bose is a fascinating raconteur who has dozens of delightful anecdotes about his encounters with prime ministers, lesser ministers and bureaucrats on the population issue. Excerpts from the interview 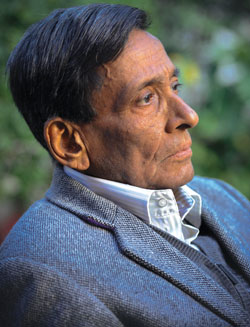 Why have governments given up on population control?

There is a huge demographic inertia in India so we did nothing. And of course, what happened in the 1970s. The main reason Indira Gandhi lost the elections in 1977 was because of Sanjay Gandhi’s nasbandi (sterilisation) programme. Family Planning programme got so discredited.

When the Janata government of Morarji Desai came to power in 1977, it said let us not touch this subject, it will give us a bad name. The government even changed the name of the family planning ministry to family welfare. But where is the welfare element in this? It is all humbug. There is nothing for children, education or healthcare.

But that was 40 years ago… Because the government got such a thrashing in the 1977 elections, they are still afraid. Sometimes, the governments set up committees and do nothing. Do you know the BJP government set up a committee of 117 members to look into this issue? I refused. When the UPA government came to power, they set up a smaller committee and I agreed since it was the prime minister who requested it. But it has seldom met although I reminded Manmohan Singh that the committee should be convened at least three to four times a year.

India’s fertility rate has fallen and the population growth rate appears to be stabilising. Do we need a Family Planning programme?

Of course, but not the kind that governments come up with. The government suffers from what I call “targetitis”. Set a target and fulfil it, through statistical jugglery. When Rajiv Gandhi became prime minister he was keen on a population policy. He was a pilot and went by figures. So his officials would tell him that we were doing well because we were meeting targets. But all those figures were cooked up. So he set up a committee of five people who had done well in their fields: M S Swaminathan of the Green Revolution fame, Verghese Kurien (he ushered in the White Revolution), Ela Bhat of SEWA, Bunker Roy (founder of the Barefoot College, Tilonia) and myself. I was there for population issues. He wanted an immediate solution for population problem.

So what happened? Why didn’t the family planning project take off?

Everyone, including international organisations, in those days was talking about Kerala’s success in cutting down birth rate. I told them it was the worst model for India. Kerala’s habitation is neither town nor village, the human settlement is such that there is hardly any difference. Kerala accounts for less than three per cent of India’s population. How is it relevant? I told Rajiv the focus should be on the most populous states in a state. In Uttar Pradesh the primary health centre is as far away as 20 km away. You have to walk that distance for medical care because there are no buses, no roads. Healthcare is critical in family planning.

I told him we must concentrate on Bihar, Madhya Pradesh, Rajasthan and Uttar Pradesh because of their demographic profile, states which could make a big dent on the population. That’s how I coined the acronym BIMARU and, incidentally, in eastern Uttar Pradesh, bimaru means a sick person. Assam and Odisha fit the definition of BIMARU but their population was less than five per cent each so I left them out. Rajiv understood that and agreed to change the strategy. He sacked the minister and the top bureaucrats and brought in a new team. Unfortunately, he got caught up in other matters.

But even today these states remain BIMARU.

Yes. I looked at the demographic indicators of these states and these are still dismal. The BIMARU states were officially termed Empowered Action Group states or special category states, which is rubbish, and it’s bad English too. You should have something that people understand. Today Nitish Kumar is happy about Bihar being a special category state. It’s another way of saying it’s still backward.

What would be a good family planning programme?

Ah, first take it out from the government. They have no ideas and are incapable of doing anything. The government should get out of the sector altogether and bring in NGOs to work on specific aspects that have a bearing on population growth such as education and campaigns against early marriages. It would be a good idea to involve corporate NGOs such as the Azim Premji Foundation. You cannot have all-India solutions.

India is supposed to benefit from the bulge in its young population that will provide a huge demographic dividend and spur growth.

That’s nonsense. You cannot have a dividend without investment, either in cash or kind. What is it that you have invested? It doesn’t follow that just because you have the numbers there will be an automatic dividend. There is already so much unemployment; the young become Naxalites because they cannot get jobs. They will become more violent.

So you don’t share the optimism of the government and global economists about our demographic dividend.

My definition of youth is 15-35 years, and that’s about a third of our population. What is the outlook for them? We are whistling in the dark. China, regardless of a demographic dividend, has captured the world. Why?

Because of its high literacy rates and skilled manpower. Even 65 years after Independence our literacy rate is 74 per cent. We have army of angutha chhaaps. All these illiterate people are in poor health. They are a liability. Despite all the talk of welfare, all the laws such as Right to Food and Right to Education, nothing has been implemented.

We should have a one-point agenda: educate the new generation and improve school curriculum.

We are so focused on IIMs and IITs that we have no time for the basics—school education. We need to put money into this and health. We still need to focus on the original BIMARU states plus four.

How do you see the future?

The thing to look at is migration. The demographic dividend should yield to demographic imbalance through migration. Our eyes should be on migration which is of three categories: within the district, within the state and outside the state. There are four streams in this migration: rural to rural, rural to urban, urban to urban and urban to rural. It all depends on the kind of development India provides. There is also migration outside the country. All this will have an impact on the small family norm which is just one aspect of modernisation.