Johan Von Schreeb, a surgeon who has worked for the group Medicins Sans Frontieres, is a public health scholar with the Karolinska Institutet, Sweden. His recently published PhD thesis enquired into humanitarian health assistance in countries affected by disasters. He tells Vibha Varshney why such assistance has often failed to meet the real needs of people. 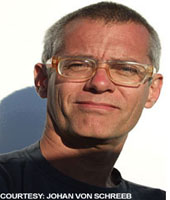 International health assistance rarely looks beyond treating trauma cases, which need immediate attention. By the time health professionals from abroad reach an affected area, the life-saving trauma care needs are mostly over. They are usually taken care of by local medical infrastructure, in whatever manner possible. In Iran, Haiti, Indonesia and Pakistan, none of the 43 foreign field hospitals that were set up were operational within 48 hours of the disasters. The field hospitals in Iran dealt with deliveries and appendicitis cases. Whereas, after a terrorist attack in the Beslan School, North Ossetia, Russia, in 2004, medical care was provided by 500 local doctors, and there was adequate local and national resources to address the immediate crisis.

A donor's policy of funding health projects is based on 'needs assessment' of an area affected, which is often based on the perception of donors. Assistance should rather be based on actual needs. Take the case of the Swedish International Development Cooperation Agency, which I studied during the course of my research. The agency had population data for only 37 per cent of the projects that it had funded; and assessment of health needs for less than 20 per cent of the projects. Such information is vital and needs to be combined with information on the perceived needs of the affected population. Modern information technology can provide satellite images that could help estimate the number of the affected. The faster we have numbers, the quicker we can provide assistance.

The funding policy needs to be redrafted. Health assistance also needs to include medium- and long-term consequences of a disaster and protecting livelihoods. Donors' decisions should take into account the socio-economic situation, including information on mortality figures in a country in normal times, the human development indicators and the number of refugees. We need to have a good understanding of the affected area before sending relief. Media tends to portray the victims as bereft of any capacity themselves. But most middle-income countries today have enough doctors and enough medicines, and don't need doctors from high-income countries to be sent when there is a disaster. My studies bring the focus on the problems of providing correct assistance after a disaster and the dilemma that local decision-makers face.

In recent years, there has been a shift from incentives to money. For those who have lost their houses, instead of giving building materials and pots, pans and clothes, give them money so that they can decide what they want to spend on. While this sounds simple, it requires a mind shift that is quite immense. The thought process of relief assistance is still very paternalistic. Studies show that there are fewer chances of corruption when money is provided. We can control money better than we can control material.

Lack of coordination between ngos, the un and national agencies is an issue. They are not ready to share information readily. There are currently some initiatives, especially in the health sector, and we will hopefully get some results from the who initiative that is trying to set up a system which would help in analysing and assimilating information from an area and providing an overview. Organizations working in an affected area need to be more transparent, but this is a competitive market and everyone is trying to get funds. It has become an industry in itself, which I think is a shame.

Bangladesh is prone to natural disasters. It offers good example of cost-effective investment in disaster preparation. Twenty-five years ago, half a million people died in a cyclone and in 1991 around 150,000 died. This time though, the casualty figures were much lower, around 5,000. It was a tragedy indeed, but it is remarkable how, despite population growth, fewer people died. The government and local groups have managed to set up a system to provide assistance--concrete platforms and a warning system. The focus now should be on trying to protect livestock and farmlands, so that future cyclones will not halt economic development.