In June 1979, an innovation in the field of law and politics came about in the form of Permanent Peoples’ Tribunal. The idea behind it is identifying and publicising cases of violations of fundamental rights. For the first time a session of the tribunal was held in India in November 2011. In an interview to Jyotika Sood, the secretary general of the tribunal, Gianni Tognoni, tells how it works 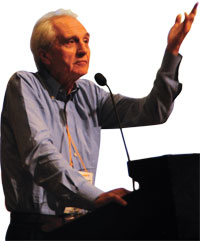 What is the Permanent People’s Tribunal (PPT)?

It is an opinion tribunal. We work on cases in which national and international legislation fail to defend rights of the people.

PPT is competent to give judgment on any international crime, specifically those against peace and humanity. PPT is a body which, by statute, is part of the international section of Lelio Basso Foundation based in Italy. It is a direct continuation of the opinion tribunal Russell I and II, the war crimes tribunal.

Who can approach PPT for justice?

Any government, international governing bodies or NGO, political group or a group of people can submit an application. The seat of PPT is in Rome, but it can exercise its functions anywhere.

Who are PPT’s jury members?

The jury members are chosen on the basis of their moral, scientific and literary qualities, reflecting PPT’s ideological pluralism. Some of the members are Nobel laureates. The court can have 35 to 75 members, who are nominated for three years and their mandate can be renewed. The members elect a president and two vice-presidents for three years; they constitute PPT’s presidency committee. The committee nominates 11 judges for every session, but the quorum of seven judges has to be maintained during case hearing and decision making.

How does PPT function?

The presidency committee decides admission of a case or an application. As soon as the request is declared admissible, the committee tries to seek cooperation of the government or private group being accused and gives them ample opportunities to submit proofs and evidence for defence. The judges examine various documents, witnesses and visit the affected areas. The accused, persons or organisation, is informed about the decision taken against them. Participation of the witnesses or the accused is possible at any stage of the proceedings. Even if the accused refuses to recognise PPT’s competence, every relevant act of the trial is duly communicated.

PPT’s verdict is not binding for states and organisations. How do you ensure it is taken seriously?

PPT’s actions are based on the principles expressed in the Universal Declaration of the Rights of Peoples. After analysing the reality and complex historical, political and economic causes that lead to violation of the rights of the people, PPT issues legally valid rulings against those responsible for violations.

All rulings are sent to major international bodies and many have been discussed by the UN Human Rights Commission in Geneva.

What kind of cases have been heard in the past three decades?

We have followed, anticipated and supported the struggles of peoples against violations of their fundamental rights, such as the denial of the principle of self-determination, foreign invasions, environmental destruction and all cases of new forms of economic dictatorship and slavery.

Since its inception, PPT has organised 36 sessions. The sessions were on Impunity in Latin America (1991), Conquest and international law (1992), The policies of the International Monetary Fund and the World Bank (1989 and 1994), International law and new wars (2002).

Another important area of analysis is economic crimes, seen as structural categories of human rights violations. This was the focus of the sessions on industrial disasters, such as Bhopal (1992) and Chernobyl (1996), and those on transnational corporations and peoples’ rights in Colombia (2006-2008) and the European Union and transnational companies in Latin America (2006-2010).