India depends heavily on groundwater. But overextraction can cause the land to sink. A recent study found that signs of land subsidence are already evident in Kolkata. The Central Ground Water Board has signed anMoU with the Indian Institute of Remote Sensing to study the impact of groundwater extraction on land subsidence in northern India. Sushmita Sengupta talks to Pradip Sikdar, a geologist involved in the Kolkata study, on the importance of the new project 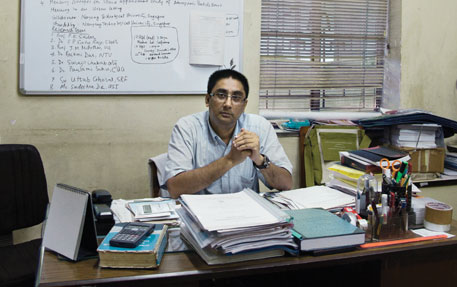 What is the relation between land subsidence and groundwater extraction?

Land subsidence generally occurs when groundwater is mined in an unplanned way. The impact is more evident in rocks made of fine-grained sediments. Decline of groundwater table causes a vertical compression of sediments bearing the water. Sometimes, lateral compression may also take place along with this vertical compression. Lowering of the pore water pressure in a layer results in an increase of the effective stress in the soil, resulting in consolidation of the soil which manifests as land subsidence.

What are the effects of land subsidence?

The effects can be settlement of upper clay layer leading to damage of infrastructure (roads, bridges) and flooding due to ineffective drainage systems of the city. Lines of weakness in the layers can also be activated and this may cause earthquake in the area. There can be indirect effects such as a change in gradient of streams or drains.

Is land subsidence a serious issue?

Land subsidence is an irreversible process. It can be very serious. In China the average total economic loss due to subsidence is estimated at around US $1.5 billion per year, of which 80-90 per cent are indirect losses. In Bangkok many private and public buildings, and underground infrastructure are severely damaged by subsidence.In 2006, the total cost of subsidence-related damage, especially in subsidence-prone areas, in the Netherlands was estimated at over €3.5 billion per year (Rs 276 billion at current rate). The US Geological Survey also recently released a report showing that extensive groundwater pumping is causing land subsidence in California.

You were part of a study done in Kolkata on subsidence. What did the study show?

The Indian Institute of Remote Sensing recently signed an MoU with the Central Groundwater Board to study the effect of land subsidence in northern India. Why is this study needed?

Northern India comprises plains and hilly areas. Major rivers like the Ganga and its tributaries criss-cross the area and deposit fresh alluvium on the northern plains. Urbanisation and industrialisation in these areas are causing a rapid decline in groundwater. Unplanned extraction of groundwater from soft, fresh alluvium underlying the northern plains can lead to land subsidence. This means cities like Lucknow, Agra, Mathura, Kanpur, Allahabad, Varanasi, which are on the Gangetic plain, are prone to land subsidence. A study done in 2009 inLucknow had suggested that if the city continued groundwater extraction at present rate, there will be land subsidence in 2026. The study was conducted by a retired scientist from the Central Ground Water Board (CGWB).

How is land subsidence studied?

For the Kolkata study, we collected data on groundwater from published journals, CGWB and water level data measured by myself and my students in wells in Kolkata and adjoining East Kolkata Wetland. The subsidence of land was then calculated using different mathematical models. But land subsidence can be studied more accurately using remote sensing.

How will the study in northern India help the people?

The study will help CGWB to prepare a groundwater management policy. Stringent laws can also be imposed by the state groundwater boards on the industries which are the water guzzlers.

In Bangkok, extreme land subsidence by groundwater extraction was successfully reduced by regulations and restrictions.

A specific law (Groundwater Act) was enacted in 1977. Most severely affected areas were designated as critical zones, with more control over private and public groundwater activities. Groundwater use charges were first implemented in 1985 and gradually increased. Currently, Bangkok uses a very small amount of groundwater. Only 10 per cent of water is sourced from the ground. The rate of subsidence has gone drastically down.