Let the journey choose the vehicle

Heather Allen looks at issues related to sustainable development at the International Association of Public Transport, Brussels. Pradip Saha caught up with her on issues topical to her work. Excerpts: 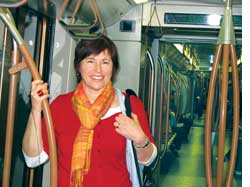 There is a lot of interest in academic and public policy circles in public transport in the context of climate change. Do you see business going up?

Business related to public transport is going up, but not everywhere. Business is on the rise in places that are offering services for a work-home trip. This is apparent in places like the US, which is interesting, and in almost all major European cities.

How do you see public transport in a profit-driven world?

It would not be right to base complete cost coverage on the ticket. In places where public transport is a profit-making business, there have been other forms of revenue. The rail property model in Hong Kong, for example. The railways is able to glean the value their lines bring to residential and commercial properties.

Besides, new streams of revenue such as advertising can add to public transport revenues.

How does public transport figure in climate change negotiations?

Transport is growing faster than any other sector. But it is not well integrated in the international climate change negotiation. Public transport is badly represented in the financing mechanism developed by the Kyoto Protocol. There are only two Clean Development Mechanism projects on public transport and neither is generating enough money.

Your views on the aspiration for a private vehicle.

A private vehicle is the dream of freedom and mobility that we all have been sold over the past 50 years. But leaving everything to market mechanism has put congestion, air pollution and safety to the tipping point. The cost of congestion, air pollution and traffic induced accident is about 6 per cent of your gdp. This is just wasted money. Let the kind of journey decide the appropriate mode of transport. If you are going on a trip to a suburban area, then a private car would be the choice. At other times it could be walking, maybe cycling, high- speed train or the inter-city coach.

In India, we don’t make enough buses. What is the scene across the world?

Compare the change in car design over the past 30 years with that of bus design and you will have your answer. Yes, the bus does look a bit better. But there has not been much improvement in the bus design. Bus production is low compared to truck production. This is the reason a bus is built on a truck chassis, not necessarily the best chassis for a bus.

There’s not much of a choice in the developing world, because you can’t really afford very plush, modern technology based buses, with computerized systems and very expensive gadgets in there. You need a very solid basic bus that is reliable and probably rugged enough to drive on roads that might not be 100 per cent maintained.

Any interesting development in terms of fuel for buses?

A lot of work is going on regarding diesel-electric hybrid and cng hybrid. There’s a lot of potential for Delhi which has a very good cng infrastructure. There is a lot of work on biodiesel and biodiesel mix. There’s also a great interest at the moment in building more buses that run on ethanol.

Walking is still a problem in many cities of the world.

Nobody can get public transport unless they walk to it. After you park your car, you need to get out and walk. In developing countries, the sidewalk has a completely different notion to what it is in Europe. It becomes a restaurant or a motorbike maintenance shop. Space for pedestrians should be integrated with public transport projects.

How is the bicycle industry doing?

I believe it is doing extremely well. In India there are some shops that have bicycles nearly as expensive as an imported car. This shows there is an interest in good bicycles. It is seen as a real mobility companion.

In places like London, because they have built a whole new cycle track, the increase in cycling has been something like 400 per cent over the last three or four years. This is absolutely huge increase.