M S Swaminathan, popularly known as the father of India’s Green Revolution, has been associated with national agricultural research system (NARS) since 1947 when he was a student at the Indian Agricultural Research Institute (IARI). After getting PhD from Cambridge University, he joined IARI, of which he became director, and then director general of ICAR. A believer in the need to articulate clear, goal-oriented research, Swaminathan tells Latha Jishnu what has changed since his time. Excerpts 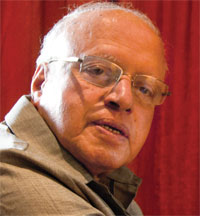 Can you tell us how research priorities have changed?

Research is always dynamic and, therefore, priorities will change over time. In the 1950s and ’60s, our major goal was improving crop productivity. Currently, the emphasis should be on improving the income of farmers as well as the environmental sustainability of agronomic technologies. I see two changes: in the linkage between science and public policy, which was very close, and in the strong relation between the scientist and farmers, where the former would go to the farmer’s field and demonstrate the technology.

How did this linkage become weaker?

One reason is that scientists don’t express their views. Today the GM debate is going on and you hardly find scientists from ICAR, the top most institute, talking about GM science. They should express their views. In 2004, I suggested an All India Coordinated Research Project on biosafety. Today there are over 1,000 (GM cotton) hybrids and farmers are confused. ICAR should have forced all companies to test under bio-safety precautions.

Is it because scientists are scared?

Yes, it is about being a government servant. In our time our strength was communication with the media. When the whole world was saying ‘these guys are going to fail in Green Revolution’, Indian media was saying the opposite because I got them to the field.

How the research environment changed?

Scientists today are better paid and laboratories are better equipped. A sense of complacency has set in; there is no longer the pressure to do something urgently to improve the wellbeing of farm families.

Has the quality of scientific manpower changed significantly since your time?

The quality of scientific manpower varies widely from institution to institution. Most of the agricultural universities have become highly inbred. Appointments to senior positions are also made on the basis of political influence. There is more emphasis on bricks than brains. Achievements are measured by the number of buildings built and money spent and not by the improvement in the wellbeing of farm and fisher families.

There is a general perception that ICAR’s role and research has declined. Do you agree?

ICAR has not declined in terms of money but there is a need to strengthen national research system and not hand over our responsibility to international institutions. There must be well-defined milestones. When I was in IARI we had small groups and we had a very clear idea about what has to be done. There were clear goals, five-year plans and we got results.

The Chinese appear to have done much better than us.

The Chinese have done a much better job because they are able to generate team-based and focused work. They also have a strong bond between scientists and farmers. In a small way such bonds were developed during the Cultural Revolution, but have now become organic and ingrained in the system. This is why China could spread technologies like hybrid rice very fast.