Lowland rice is a carbon sink

Pratap Bhattacharyya, senior scientist at the Central Rice Research Institute (CRRI) in Odisha, along with his team at the institute, says rice is not the villain it has been portrayed as in the global debate over greenhouse gas (GHG) emissions from agriculture. Going against the mainstream view that rice cultivation is a major contributor to GHGs, the research team says in a paper published in the internationally peer-reviewed journal Agriculture, Ecosystems and Environment that rice fields absorb more carbon than they emit. Tropical lowland rice ecosystems are net carbon sinks, they maintain, a view that has stirred up a controversy among rice scientists. In an interview to Latha Jishnu, Bhattacharyya, who is now at the University of Georgia in the US, explains, along with fellow researcher A K Nayak, principal scientist at CRRI, the science behind their hypothesis. Excerpts: 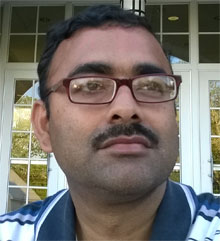 What made you look at the issue of greenhouse gas (GHGs) from rice from a different angle and when did you start doing so?
Rice is the major food crop in Asia including India and about 80% of it is grown under flooded conditions. It is grown in different environments, edaphic conditions and different agricultural management practices, which affect the rates of two potent greenhouse gases (GHGs):  carbon dioxide (CO2) and methane (CH4) emissions.  Hence rice is often considered as a causative factor in GHGs and culprit in climate change. To determine the reality of the statement in Indian perspective, we conducted a year- long study at the experimental farm of Central Rice Research Institute (CRRI), Cuttack, during the wet season 2012 and dry season 2012-2013 using eddy covariance (EC) technique.

What did you find?
We observed that geographically lowland rice growing areas are confined to the coastal states having high annual rainfall. Lowland rice cultivation is usually a bunded system in which the field bund height ranges from 50 cm to 100 cm. Typically, rice fields act as perfect water harvesting structures and helps in reducing the run off loss. They also enhance the groundwater recharge, thereby helping to prevent the salt water intrusion into aquifer in coastal areas. In absence of these rice fields and bunded structures, the water would have been lost to sea and contributed to decline in groundwater. The hypothesis is that in absence of rice fields there would have more expenditure for rainwater harvesting and artificial recharge of aquifer and electricity and petroleum needed for extracting water from still deeper layer of aquifer which may still further contributed to climate change.

So you are saying that lowland flooded rice fields are actually carbon sinks?
We must make it clear that we have not claimed that lowland rice ecology is a methane sink. We converted all possible input and output of carbon (including CH4) and used the EC method to estimate the net exchange and thus arrive at a conclusion whether lowland rice ecology acts as a carbon sink or as a source.  Although CH4 is a source of carbon loss from lowland flooded rice ecosystem, considering all the components of carbon balance, this ecology had a good potential to store considerable amount of carbon.

What exactly is this eddy covariance (EC) technique?
The EC technique is the most widely favoured by scientists across the world to measure the exchange of carbon dioxide, water vapor, methane, various other gases, and energy between the surface of earth and the atmosphere in different ecosystems. Advanced versions are increasingly being used by rice scientists to arrive at a fairer measure of emissions in rice ecosystems which have for long been targeted as major villain in pushing up agricultural GHGs.

Can you explain in simple terms how this works?
The relationship between production and decomposition is what determines whether a system is a sink or a source of atmospheric CO2. Therefore, GHGs emissions between ecosystems and atmosphere demand continuous, precise and accurate monitoring and their proper quantification for budgeting. Real time and precise monitoring of GHGs emissions is possible with the help of the EC technique. 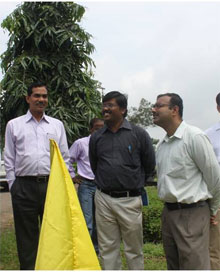 How long you have been using such a system and how does it differ from conventional methods of measuring GHGs?
We have been using open path eddy covariance system for monitoring and estimation of net ecosystem CO2 exchange since October 2009. But, we started work with open path CH4 analyser since May 2012. In conventional methods, CO2 is usually measured through portable CO2 analyser coupled with soil respiration chamber or sampled by manual closed chamber technique and measurement by gas chromatography. Likewise, CH4 is usually sampled with the closed chamber technique followed by measurement with gas chromatography, resulting in discontinuous series of measurements performed over a limited area that generally does not provide sufficient information on the continuous seasonal and short-term variation of the fluxes on ecosystem level. The EC technique, on the other hand, is a powerful tool for real time (on second basis) and continuous characterisation of the gaseous carbon fluxes which do not interfere with the processes of gas exchange between the surface and the atmosphere. It can represent a large area of land at the ecosystem scale than the typical plot area for a short period or even for several years.

In your view, what are the implications of your findings for India?
The findings should stimulate a thinking process whether there can be zoning of rice areas favourable from climate change point of view and nurture these areas. Understanding the processes and components of net ecosystem carbon budget in lowland flooded rice paddy is essential to know whether the system is behaving as net carbon sink or as a source (net carbon depletion or loss from the system).  This should also hold good for other major cropping systems in India like rice-wheat, rice-maize, wheat-soybean, etc. We should build a national database on GHG emissions in particular along with estimation of global warming potential (GWP) based on ecology and cropping systems.

Further studies are required to continuously monitor and estimate diurnal, seasonal, annual, inter-annual and even long-term variations in CO2, CH4 exchange and carbon budget, including the fallow periods in different rice-based production systems, agri-horticultural, agri-pasture and agro-forestry systems under different agro-climatic zones in India. Considering these, a nationwide flux monitoring network (India Flux) under the umbrella of ICAR could be established for GHGs data inventories and better prediction of net emission.

What has been the reaction of the ministry of agriculture to your findings?
The paper is just published.