K Radhakrishnan, chairperson of ISRO, says if Mars Orbiter Mission is successful, the organisation will look at a larger mission, possibly studies on Mars to explain how life came to Earth. Excerpts of his interview: 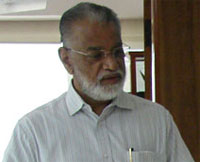 India's space programme is an application-centric and a people-centric programme. It aims at self reliance in satellite technology (communication, navigation, remote sensing). Mars mission would put exacting demands on technology and drive frontier technologies which would find application in satellites and enable new application for common man. It is a chain.

Is an expenditure of Rs 450 crore justified?

The space programme gets just 0.34 per cent of Central government expenditure. Only 7 to 8 per cent of space programme's budget is on space exploration. The mission would create excitement and enrichment of knowledge. This is why we study science. The orbiter would be taking the first satellite-based closer observation of methane on Mars.

What will we learn from the mission?

It is a technological challenge. This satellite has to move out of the sphere of influence of Earth into the sphere of influence of sun and then get into the sphere of influence of Mars. Signals from Earth would take anything from 4 to 20 minutes to reach the satellite. The spacecraft should have the autonomy for several of its functions—if something goes wrong, the satellite should be able to figure out its problem and switch to a stand-by system/safe mode of operation. It should be able to work independently till intervention can be done from Earth. Much of the information needed to run the orbiter and the payloads has already been fed into the orbiter. We would just need to send a trigger command. We would need to monitor the orbiter during the 300 days and then control it so that it goes into the orbit of Mars. Through this, we will find out if we have the capacity to reach Mars.

If this is successful we will look at a larger mission. This would be a scientific mission and we would look for partners. Earth and Mars have a lot of similarity in terms of nitrogen and carbon. Our studies on Mars could explain how life came to Earth.