In the 1980s, when very few people visited Tibet, Michael Buckley, an Australian settled in Canada, wrote the first Lonely Planet guide to the region. A regular visitor to the world's highest plateau for the past 30 years, Buckley says he has witnessed Tibet's landscape deteriorating. He recently wrote a book, Meltdown in Tibet, in which he has held China responsible for the degradation. In an interview with Anupam Chakravartty, he says China has big plans to build mega dams in Tibet and is collaborating with multinationals to extract shale oil and minerals to provide electricity and fuel to its urban centres and industries. Edited excerpts 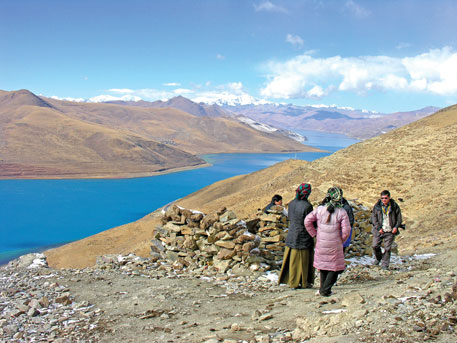 From tourist guidebooks, you shifted to writing on Tibet's environment. What made you write Meltdown in Tibet?

When I first arrived in Tibet in the 1980s, the landscape was fairly pristine. There was not much activity. There were no mines or dams. I always assumed that this landscape at a high altitude, with snow-capped mountains, grasslands and beautiful lakes, would be there for future generations to see. But the scenario is rapidly changing, especially after the train to Lhasa was started in 2006. I thought somebody should say something about this because it is going to get worse. If the Chinese authorities do not stop what they are doing, the landscape will soon disappear. You might ask, “How can a landscape disappear?” The fact is that if you have mining, if you remove mountain tops to extract minerals, if you change or drain a lake, you can change the whole ecosystem within a matter of years. And we have already witnessed this in some places. This upset me and I started to write about it.

What is the significance of Tibet for the whole of Asia?

If you look at the map of the Tibetan plateau, the highest plateau on Earth, there are 10 major rivers emerging from it. That puts Tibet in an unusual position. It is a provider of water to all of South Asia, East Asia, to about 10 different countries in the downstream. Over 2 billion people depend on that water. If somebody wants to divert that water, which is what China wants to do, it becomes a serious issue for the people living downstream.

Not much information is available on what is happening in Tibet. What does your story say?

Journalists do not have access to central parts of Tibet where most of the mining activity is taking place. They may get access to eastern Tibet in Amdo and Kham provinces. But if you go as a tourists, you have a better chance ofgetting accessto mining areas. I always go as a tourist, which is what I am. I am a freelance journalist, not affiliated to any news agency.

The lack of information in the public domain is also because there is no link between Tibetans living in Tibet and those staying outside—their communication lines are blocked. They cannot send e-mails critical of the government because they will get arrested. They do not have access to usual social networks, such as Facebook, in China. Tibet does not get news from the outside world, and news from Tibet does not go out either. So we do not get a clear picture of what is happening.

What is China's big plan in Tibet? What is it seeking to do by building dams across rivers or diverting rivers?

Chinese authorities do not reveal much of their plans. They will release information only after the plan is executed. But it is clear that they plan to construct mega dams on Tibet’s rivers and link the hydroelectricity generated to national grids. The developers have saturated the rivers in southeastern China with dams and are now looking towards western China. They are moving to higher grounds. They are adding cascades to the dams to ensure turbines run smoothly. They have built cascades in the lower Mekong and are now moving to its higher reaches in Chambo, which is in Tibet. 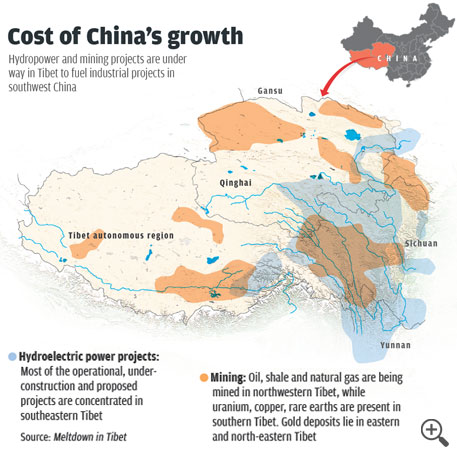 The demand for electricity is not much in Tibet because only 6 million people live in the whole of the Tibetan region. They would fit into half of the Chinese city of Chongqing. You do not need a 500 MW dam for Tibet. The electricity generated from these dams will be transmitted to areas like Beijing and Shanghai, where there is demand for power, and to factories in Chengdu and Chongqing in southwest China where most of the industries are planned. Basically, they are exporting power from Tibet.

The other thing that is planned is water diversion from eastern Tibet to northeast and northwest China, where there is a huge demand. Northwest China has the Taklamakan desert where there are plans for mining, and you need large amounts of water for that. There is already mining going on for shale gas, tar sands, shale oil and oil sands, to name a few. In the northeast, they need water for people. There are about 300 million people in this part with very few water sources. They already have two diversions running from the Yangtze river. The third is planned from the Tibetan region. Nobody seems to know how exactly these plans would be executed, but it will probably involve a huge amount of tunneling and a large number of dams. The facts and data have not been released. There are also big plans for mining in Tibet. The region is a major source of lithium, copper, gold and silver, which are desperately sought by China. Lithium is used in batteries for electric vehicles, among other things. In future, there will be a huge demand for lithium in China. It could come from Chile and Bolivia, too, but getting the mineral from Tibet will be a lot cheaper.

Is it just China which is in need of these resources? Who are the people operating in these areas and who gets the benefit?

I am from Canada and the major mining companies involved in Tibet are Canadian companies. There are about a dozen companies helping their Chinese counter-parts with exploration by bringing the technical know-how and supplying mining equipment which are not locally available. But when it comes to actual mining, these companies get bullied by their Chinese counterparts. Once Chinese companies get the required technical support or understand various processes involved in mining, foreign counterparts are shown the door. It has been happening for many years.

There are also ethical and environmental violations by these Canadian companies. There have been movements in Canada to make these companies conform to the same standards in China that are applicable to them in Canada. The biggest mining company, China Gold International Limited, has 60 per cent of its stake in a Chinese government-owned corporation, but it is listed in the Canadian stock exchange in Vancouver. It has a big mine in Gyama in east Tibet. This is actually a Chinese company masquerading as a Canadian one and raising money in the Vancouver stock exchange.

What are the specific impacts of various projects on Tibet and its neighbourhood?

I am not an expert in climatology but China claims that environmental degradation that is happening in Tibet and elsewhere is because of climate change. But the fact is that China is driving the climate change. It is the biggest emitter of carbon dioxide (CO2). It has surpassed the United States. In 2013, 27 per cent of CO2 came from China. (US was at 15 per cent and India, 6 per cent). This is contributing to the glacial melting in the Himalayas. The rate of melting in Tibet is twice as fast as global melting of glaciers.

The other factor that is contributing to the glacial melt is the emission of black soot due to inefficient burning of fossil fuels. Black soot is essentially composed of tiny black specks. They accumulate on glaciers, turning them grey. This attracts more heat from the sun. The more the black soot accumulates on glaciers, the more rapid is the melting. This has been underestimated by some scientists but it possibly contributes to 50 per cent of the melting. We still do not know as we do not have exact data.