BENNY KURIAKOSE began his architecture career in 1984. He was one of the privileged few who worked under the tutelage of Laurie Baker which involved both learning and unlearning. In an e-mail conversation with DISHA SINGH, Kuriakose, Chennai-based specialist in low-cost housing, describes the pioneer architect’s methods. Excerpts

When did you meet Laurie Baker?
It was in 1984 when I was doing fieldwork for my final year thesis. Baker was visting one of the sites. I walked up to him and started a discussion at the end of which I asked, “Can I work with you for two or three months?” He said, “I do not take assistants. Why should I waste an assistant’s time to do a draft?” He wasn’t sure if he could pay me because that would add to the construction cost. I said I was not interested in payment and would simply like to learn.

How did the experience of working with him impact your architectural sense and general perception? I was able to learn by just watching him work. He was open and explained whatever he knew in simple language. Nobody does that now.

Baker once said that not everyone in India had “access to architecture”. What were his reasons?
He strongly believed that the profession had a responsibility of making architecture accessible to the common man and was upset that it was not fulfilled. He showed another side of architecture wherein he used the same standards in building for the rich as for the poor.

When I met him in 1984, there were more than 20 million families without a house and many more were living in structures without the benefits of architecture. Today the number of families without a house is more than 45 million. Baker, who was referred to as “daddy” by his colleagues and workers, once said, “I would rather see a million mud houses that are 200 sq ft than one more high-rise building.” For Baker, “small was beautiful”.

Baker was inspired by Mahatma Gandhi. How did he imbibe Gandhian ideals in his work?
In 1943 while waiting for a boat in Bombay (now Mumbai) to return home in England, Baker met Gandhiji. During their meeting, Gandhiji said, “You are bringing knowledge and qualifications from the West, but they will be useless unless you try to understand our needs here.” It is because of Gandhiji that Baker made India his home.

Another aspect which Baker brought into his work was the use of indigenous materials like mud and bamboo. He carried Gandhiji’s values of honesty and sincerity to the buildings he designed. He never covered a brickwall with plaster. He said, “Beauty is related to truth. A stone house should look like it is made of stone and the same goes for a brick building.”

What role did Baker accord to an architect?
For Baker an architect had to turn his design into reality. Baker thought it would be wrong to delegate work to an assistant because the client approached him for a “Baker house”. He took over the responsibility of the entire construction process, including accounts. His buildings were constructed at a much lower cost. Baker directly paid masons, carpenters, electricians, plumbers and other people involved in the construction. He used to say, “I see nothing wrong or unethical about an architect taking part in the construction of a building. Wouldn’t it have been silly if Picasso was only allowed to give working drawings for a painting and not paint them?” 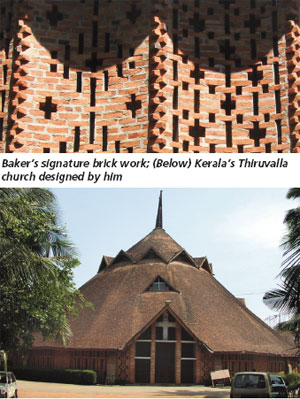 How did Baker conceptualise a building?
Each design had to be different. It had to take care of a client’s personality and local needs. The most important aspect for Baker was the building cost; it had to be minimal. Once when a journalist asked him how he was able to design different house shapes, Baker replied, “There is a tree here, there is one there and a third one there. I do not want to cut any trees and this principle has much to do with the shape of a house.”

How did he handle all aspects of design and construction?
Baker had a thorough knowledge and was very committed. Neither did he seek publicity nor did he care about critics. Some critics said his buildings would not last for more than 10 years but they are still standing. There is a belief that if an architect supervises construction of buildings, he or she can do only a small number of structures. But Baker had designed and constructed more than 1,000 buildings in and around

Thiruvananthapuram, Kerala, by 1985. This was in addition to the large number of buildings he designed outside the state.

What was his take on making appropriate choices for building materials?
Since most of his buildings were in Thiruvananthapuram, the walls were made of country burnt bricks. For roofs, he mostly used filler slab which had rejected mangalore tiles as the filler. In places where stone was available in plenty, he used stone. He also made a lot of buildings in Gujarat. There, he used clay pots as a filler material.

You completed Dakshina Chitra in Chennai which Baker had designed. Do you think your additions keep Baker’s vision intact?
He had made a master plan for DakshinaChitra, a centre for the living traditions of art, craft and architecture of south India. After his demise, I was entrusted with the task of completing the project. At that time changes had to be made to the site plan because the transplanted vernacular houses were different from those in the master plan. For the site’s public buildings like the main building, restaurant, library and guesthouse which were designed by me, I tried to remain true to Baker’s principles.

Are Baker’s ethics and principles relevant today?
It is important for the present generation to ensure that the principles Baker stood for are taken further. As Baker once said, “We should be thinking and designing as Indians for Indians in India.”