My report is not an industry report: T S R Subramanian

The High Level Committee (HLC), constituted by the Union Ministry of Environment, Forests and Climate Change (MoEF&CC) three months ago to review the key environment laws, submitted its report to the government earlier this week. The committee’s recommendations focus on “streamlining” and “fast-tracking” green clearances for industrial projects. The committee, however, seems to have overlooked the issue of rights of the people affected by such projects. As government reviews the report and apprehensions rise among environmentalists over its outcome, T S R Subramanian, former cabinet secretary and chairperson of the HLC tells Kumar Sambhav Shrivastava why the committee has made the recommendations that it did. Edited excerpts of the interview 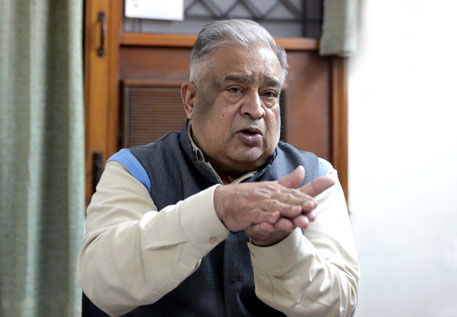 Your mandate was to review six key environment laws administered by MoEF&CC. What are the changes that you have suggested in these laws?

What we have proposed is a new umbrella law which makes National Environment Management Authority (NEMA) and State Environment Management Authorities (SEMA) statutory bodies, as opposed to the ad-hoc monitoring bodies which presently exist. So, people cannot tamper with them. Earlier, procedures for prosecution of violators were not defined. But now, NEMA and SEMA will have a strong legal cell, headed by a retired district judge, so that they can process cases, conduct proper investigation and prosecution.

The old laws will remain as long as they are not inconsistent with the new law.  The Air (Prevention and Control of Pollution) Act (of 1981) and the Water (Prevention and Control of Pollution) Act (of 1974) will be merged with the Environment Protection Act (of 1986). In the forest areas, we don't see much contradiction between the Indian Forests Act (IFA) of 1927 and the Forest Conservation Act (FCA) of 1980. We are going to let them continue as they are. We don't see a need to amend them. But for all of these laws, the penal procedure will be defined in the new law.

But there are many contradictions between IFA and the Forest Rights Act (FRA) of 2006 and also conflicts between implementation of FCA and FRA. What do you have to say on this?

There is not much contradiction associated with Forest Conservation Act. However, FRA has got its own dynamics. We are not responsible for it (review of FRA was not part of HLC's mandate). But what we are saying about it is that FRA says the forest rights should be settled in every village, in every area. In the past six years, the rights have not been settled. We are now saying, please settle them. Whatever the rights are, just settle them. Don't keep the process open and allow it to become a playground for politicians and other vested interests.

The second thing we are saying is that in case of linear projects, such as roads or pipelines which benefit the larger section of communities, one party should not be allowed to hold up the whole thing. So many such projects are pending all over. So, for linear projects only, we are recommending the ‘local consultation' condition should be dropped.


But tribal rights activists and environmentalists say that if you do away with the consent of local people in linear projects, it will affect the spirit of the law. What is your take on it?

People will say that. But our argument is that some higher authority has to see it in totality. Villages in Gujarat could have got the water five years earlier had there been no andolan. Though some people lost their land in Madhya Pradesh (MP), the result is that half of MP and three-quarters of Gujarat today has access to water. So, there is some cost attached to everything. Some larger force will have to look at it. Ultimately, it is all about striking a balance. We are suggesting that the government should not go after development blindly but also not let people of one village blackmail it by shouting “my right, my right”. After all, their right cannot override other people’s right to have benefits.

So, apart from the linear projects, are you sticking to the consent of the gram sabhas in other developmental projects or suggesting any changes there as well?

Wherever Special Industrial Zones/Areas have been created, the impact assessment studies have already been done and local consultations have already taken place. We are saying, don't repeat the consultations there. But, in other parts, yes, consultation is an integral part of the process because the views of the local people will emerge as to what is good for them. And they should also know what the negative effect will be.

Is it 'consultation' with or the 'consent' of tribal communities that you are referring to?

Whatever the present law is. We are not concerned with that.

There were reports of environmental groups boycotting the consultative meetings with HLC. There were complaints that the committee's consultations were not very democratic. Your comments

We had about 35 to 40 meetings as many agencies were involved. We found these meetings very constructive. Not a single agency held the view that forests should exist but not development. They all wanted to find out a way to achieve development without harming the forests. That's why our report is called 'Securing the Environment'. So, in a meeting of 25 people, one group decided to filibuster and asked me what was my mandate? How did I interpret it? I said I was not going to tell them. They had not asked me to make the report. My report will say it all. They accused me that I was there to help the industries. Now it is for everybody to see that my report is an environment report and not an industry report. Media has only reported about that one meeting but not the other 30 meetings which were so constructive. Everybody should understand that in India we need to strike a better balance between the environment and development.

The most prominent feature of your report seems to be overhauling the green clearance mechanism for industrial projects. What do you have to say?

That is because the current process is meaningless. Project approvals take three to four year. But ultimately, 99 per cent of the projects are approved. Which means the system is not functioning. Moreover, there is hardly any monitoring. Nobody is afraid. You can pollute merrily and nothing will happen to you. Basically, there is no technology and quality human resource coming into the entire picture. Nobody in the field knows what the standards are.  The people in charge also are quite amateurish. In many of the state boards and even the Central board, the members are not professionally qualified and competent to look into clearances. So, they take a layman's approach.

So, what has the HLC suggested?

The approvals should be broadly processed at the state and Central level by a technical body which has experts as its members and comprises of a full-fledged team that will not only approve projects but also monitor them effectively.  We want maximum six months time limit for the approval of a project. We have proposed that the first approval should be done on the basis of the geographic information system (GIS) maps superimposed with pollution maps, hydrology, go and no-go areas, wildlife and Coastal Regulatory Zone maps. And if a party is aggrieved by the decision of the approving body, we have an appellate body, which is a judicial body. Within three months, using fast proceedings, the aggrieved can get a verdict that will be transparent and public.

On the monitoring side, we have suggested a new major approach. It is what former US president Ronald Reagan used to say, "I will trust you, but I will verify you". It is basically the principle of “utmost good faith”, which we are borrowing from the insurance law. We are saying that the project proponent best knows its project not the inspector. The proponents should make a statement about what they are doing, what the technology is, which machines they are using, how much is the maximum damage that could be caused to the environment. They should say all this in an affidavit. We will assess the environmental compensation fee and give them the approval. 'Inspector approval' or 'inspector verification' is not essential but may happen on circumstantial basis. But if the certification is wrong, deliberately misleading or is a suppression of basic facts, then we have got a solution or punishment there. The unit can even be shut down.

But how do you ensure there is a robust verification and monitoring system?

See, if it is not robust, then it will not make things worse than what they are today. Our intention is that both NEMA and SEMA will have technical teams going all over the place. By requirement, we will ask the unit to establish monitoring machinery—24-hour monitoring machinery—that will be fed into our computers, like it is done in America or Germany. And there will be a critical check, wherever required. So, we are going to induct the latest technology into the monitoring process. Presently, the technology is only in the manufacturing process and we want it in the monitoring process as well. We have also asked for establishment of Indian Environmental Service on the lines of the Indian Administrative Services. We are hoping that through all this, we will have a body of people emerging over the next 5 to 10 years with knowledge and experience who are needed for this cause.
Web edition Web edition Interview Interview T S R Subramanian High Level Committee … High Level Committee … Environment Loss … Down to earth
SUPPORT US