Following Chief Minister Nitish Kumar’s campaign for special status for Bihar, a panel of six experts chosen by the Union Finance Ministry seeks to create a composite development index for evaluating a state’s backwardness. Member of the committee, Shaibal Gupta, who is also member-secretary of Asian Development Research Institute, Patna, talks to Jitendra 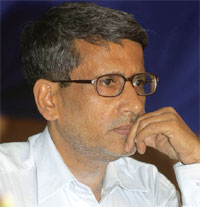 In what ways are the present criteria for deciding backwardness of a state flawed? Has the development of some states been hit due to these shortcomings?

I am not aware of any criterion for deciding backwardness of a state. Finance commissions have been using the concept of ‘special category status’, but it is based on size and not backwardness or prosperity of a state. Those states whose size is so small that they cannot perform the expected minimal functions of a state, let alone development functions (Assam and Jammu & Kashmir are exceptions, probably for political reasons), are considered special category. The criteria leaves out states which are large, yet highly disadvantaged. This has aggravated the problem of spatial economic disparity.

The present economic condition of different states is obviously the accumulated consequence of past policies of the central/state governments, as well as the functioning of other economic agents. While identifying the criteria of backwardness one should, therefore, avoid the tendency of ignoring history. We cannot change history but can certainly strive to reverse a negative trend like widening regional disparities.

Can you throw some light on the history of criteria for judging backwardness of a region?

Up to the 3rd Five Year Plan and during plan holiday (1966-69), the allocation of Central Plan Assistance was schematic and, therefore, no formula was used. During the 4th and 5th Five Year Plans, Gadgil Formula comprising population (60 per cent), per capita income (10 per cent), tax effort (10 per cent), ongoing irrigation and power projects (10 per cent) and special problems (10 per cent) was used. The formula appeared to be favouring rich states and was revised by the National Development Council in 1980. The new formula that gave lesser weightage to population and more to per capita income, however, didn't make much difference.

After Pranab Mukherjee became deputy chairperson of the Planning Commission, the Gadgil Formula was further revised and christened as Gadgil-Mukherjee formula. Here population weightage was brought back to 60 per cent, while freezing the population to 1971 index. The weightage for per capita income remained unchanged. However, tax effort, fiscal management and progress in respect of national objectives and special problems were given a weightage of 7.5 per cent each. Apart from funds required for externally aided projects and special area programme, 30 per cent of the balance of central assistance for state plans was assigned to special category states.

What difference would the Composite Development Index of State (CDIS) make?

To design a balanced alternative distributive mechanism, a classificatory scheme is mandatory. But there are many indicators of disadvantage and considering each of them individually is impractical. To overcome this, we need a composite index.

Is it a Bihar-driven idea or is it going to affect other states in the country too? How?

The extent of inter-state disparity in India was lessened during the initial years after independence, roughly up to the mid-60s. But thereafter, it has been continuously widening, the pace being faster since liberalisation in the early 90s. Many states, including Bihar, have fallen victim to this trend. Therefore, an alternative scheme for devolution of Central resources would benefit not only Bihar but other highly disadvantaged states as well.

In that case, why other backward states are not pursuing special status as aggressively as Bihar?

Bihar has been more vocal in raising the problem of resource constraint of poorer states as it has recorded a fast growth in recent years using its own resources but is not hopeful of maintaining this growth momentum without additional resource support.

Will CDIS improve current indicators for Human Development Index too?

The present indicators for Human Development Index are sufficient. I don’t think it needs addition or alteration.