‘No room left for the car’ 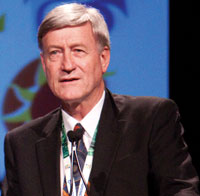 What are your observations about Indian cities?

I come from a school of thought that likes cities, and I find an Indian street fascinating. There are so many different users: bullock carts, food vendors, beggars, cyclists and cars. I can see how cars are a necessary part of city life but they must not dominate it. If you allow cars all the time, the city becomes dysfunctional very quickly. And my sense is that Indian streets have reached optimum car use. There is no room left for the car.

Every ordinary Indian can see that we need new solutions. But every traffic engineer is still trying to put in the flyovers that speed up traffic on one side even if everything grinds to a halt again on the other side.

How has your experience been in Pune, Mumbai, Bengaluru and Delhi?

My overall feeling is that Indian cities are ready for a change. People recognise the fact that there are too many cars. But it is still a problem getting people out of cars. I am committed to finding solutions and that is why I am coming back next year to try out a few ideas to extend public transport in cities like Pune.

Are Indian authorities prepared for the change?

Authorities are informed about sustainable urban transport, electric vehicles, using natural gas as fuel and the need for public transport in Indian cities. So, there is a sense that we have to try modes other than the car and also ensure they are used by everyone.

What should we focus on: metro rail system, other non-motorised transport (NMT) or buses?

You can’t make a metro work properly unless you have got very good pedestrian facilities around the stations. Getting attention for NMT is the main game.

But the car cannot be replaced by NMT. I think you have to tackle the car by introducing good metro services which will will then increase space for NMT.

Getting space for pedestrians is a major priority for Indian roads. I took photographs of roads where there are no footpaths and the pedestrians are fighting their way against traffic. It is akin to a dangerous sport.

Does Delhi Metro deserve the applause it is receiving while not running at full capacity?

The great thing about the metro is that you can continuously expand it. You can have a train arriving every 30 seconds which will take a 1,000 people, equivalent to eight-10 lanes of traffic. Many Japanese cities have done this.

How can we avoid vested interests in transit oriented development (TOD)?

That is an issue in all our cities. The need is to get affordable housing near railway stations. This needs regulatory action. For example, Vancouver has two regulations for TOD: 15 per cent of development has to be social housing which is bought by cooperative societies or by the government and five per cent of the property value goes for building social infrastructure. Then there are those who do not want to use buses. They prefer walking or cycling. Vancouver is one of the few cities which wants more density and yet has seen a 30 per cent reduction in vehicle use.

How can we convince the public to accept change?

It is a tricky political issue and has to be fought hard in every city. There is no city where you can just take a bit of space from the cars. Such actions will always be contested. The road and the car lobby are very strong and they are constantly trying to win, but they are winning less and less. The view of life from behind the wheel, from behind a wind-screen is a very selfish one and it is a myth that you can have this free flowing, beautiful traffic situation.

How do you see the future?