Sanjay Dave, director of the Agricultural and Processed Food Products Export Development Authority (APEDA), was recently elected chairperson of the Codex Alimentarius Commission. The first Indian to be appointed to the UN body for food safety standards, he is credited with introducing web-based certification of organic products in India in 2009. It is the first of its kind system for tracing organic products in the world, implemented at a national level. It boosted export of organic products by 40 per cent within a year of its implementation. Dave spoke to Savvy Soumya Misra on the challenges ahead 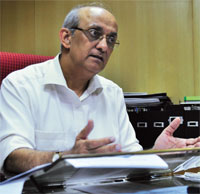 On his focus areas as chairperson of Codex Alimentarius Commission (CAC)

I would like to focus on building capacity in developing and least developed countries. Most of them do not understand the Codex document, what it contains and what is there between the lines. So, they do not know how they are going to be affected by a decision of the Commission. These countries need to be supported and trained. A lot of hand-holding will have to be done if CAC is to be of use to these countries. The Food and Agriculture Organization and the World Health Organisation are already engaged in a lot of capacity building and this effort needs to be further enhanced.

The next thing would be to speed up the process of standards setting. For instance, setting standards for apples took 15 years; processed cheese has taken more than that but still there is no consensus, and recently the concerned Codex Committee had proposed discontinuation of work on cheese. On an average, setting a Codex standard takes four years. We do know why there are delays—sometimes there are contentious issues and 184 countries that are members of the Codex need to agree. The procedures for setting Codex standards are different from those for private standards, which are set by one or more organisations that get together and draw up the rules. Codex committees meet once or twice a year, assess risk, analyse data and hold discussions before placing the matter in the plenary meeting where a decision is taken through consensus. Considering this, four years is not bad but we are going to speed up the process further.

On constraints in speeding up setting of standards

There are quite a few. For one, all countries do not get the drafts in time—it has to be translated into six languages; countries then review the drafts and send their comments. Then there are regional differences and these have to be addressed. Second, there are some 20 committees and they meet at long intervals. The food and vegetables committee, for instance, meets in 18 months. It is not possible to meet very frequently because funds are limited. But we will have to devise ways so that countries can participate effectively and that their concerns are addressed. Codex is also looking at new options for participation in Physical Working Groups and also electronic platform for the members and observers to post their views in respect of specific draft documents.

Voting is a very dangerous thing and leads to the adoption process going haywire. The best approach is consensus. We will have a training programmes for all committee chairs for skill development on mediation and negotiation, on how to develop, promote and build consensus. We will also try to work on a time bound approach.

On the justification for focusing on least developed nations

The current world population is at about seven billion. This comprises a large chunk of people struggling for one square meal a day. As per an estimate, there are 20 billion meals consumed in a day. This is a huge figure and the largest chunk of these meals is consumed in the developing and least developed nations. So, they are the ones who need food safety the most. But they happen to be the ones who are unable to participate quite meaningfully. They need to understand before they can effectively participate and upgrade food safety standards and look after the interest of their people.

On many countries not complying with Codex

The SPS Agreement under the World Trade Organisation agreement hopes that countries harmonise their food standards with Codex as Codex standards are the reference point in the framework of WTO, but there is also an option for countries to adopt standards according to the level of protection they need. This depends on food intake. For instance, some countries are rice eaters, some others consume more wheat; so, each country sets its own level of protection for its consumers based on the average daily food intake of that item. But in case there is a conflict between two trading countries, one being a country where rules are stricter than those prescribed by the Codex, then that country needs to justify the stricter rules based on science. However, if that country had expressed reservations at the time standards were being set in the Codex, then it has the possibility to impose their science-based stricter standards on the countries trading with them.

On whether India is Codex compliant

India is a member of CAC and has to set standards that are Codex compliant. In the framework of WTO, we can impose such standards on imports that we have for the domestic producers and retailers. We have to follow the national treatment clause. We really need to study the Codex well and harmonise our standards with the Codex.

On the changes India needs to adopt

India is a major exporter and importer of agricultural produce and can become a major player in the international market. I foresee a lot of activity within India to promote food safety and to encourage good agricultural practices, good laboratory practices and good industry practices. With all these activities India can be recognised as a supplier of food products that are safe and of good quality.

On what is amiss in India

These can be small things but mean a lot. Take for instance, a farmer who transports vegetables to the market. Has anyone given a thought to what was transported in the truck before the vegetables were loaded? Whether it carried meat, fertilizer or biofuel? Any of these could have contaminated the food. Things like these go unchecked. We hope things will improve with the new Food Safety and Standards Act.

On India's performance at CAC

India's participation in the CAC has certainly improved. Till late 1990s, participation from India was rare. Even our comments were not good enough. It was usually limited to statements like 'we are a developing country, we need flexibility' or 'we need time'. Things started improving in 2001. Now India gives worthwhile comments. We have actively participated in setting standards for apples, grapes, traceability, food certification system, milk standards, MRL setting, food labelling and meat hygiene.

I should not and I cannot be seen as working for or supporting any of the 184 countries. I have to be neutral. For instance, if India sends a proposal to the Commission and if it is opposed, then I cannot take India's side. That would be conflict of interest. As the chair, I will have to go by consensus. At CAC, all decisions are science-based and all decisions are taken through consensus. However, if there is an issue under consideration at the CAC and there is no conflict of interest, I can tell India (or for that matter any other country) if their thought process is in line with Codex and guide them on taking an informed decision. But it will be their decision, not mine. My role will be to converge thoughts so that a consensus is reached and a decision taken.

Whether it is the industry that provides data or it is generated by government organisations, in so far as the Commission is concerned, the source of the data is the member country. The country can collect data from wherever it considers appropriate but it is discussed thoroughly at the Expert Consultation meetings before it comes to the relevant Committee. There is no conflict of interest here. It is the country that takes the final decision and not the industry. Whatever data is there, is normally verified and evaluated by the governments before submission. It is a fair procedure and should be practised as such. Moreover, the data should not just be what the industry provides but should also be generated by the ministry of health, through its clinical trials and toxicological studies. The entire process of risk assessment is very transparent and should be kept so.

On feasibility of standards set by the EU

As the director of APEDA, I can say that the standards in the EU are very strict. May be they have a scientific basis for this, but we also know that there are many standards for pesticides that are set on the limit of detection. The more sophisticated their testing instruments become, the more stringent their standards become and that is not helpful to developing countries. For instance, EU rejected a consignment of Indian grapes last year, after it was detected to contain traces of chlormequat chloride, a plant growth regulator. The EU set a default residue limit of 0.05 ppm for it, meaning thereby that since they did not allow its use they had no data and so had prescribed the default value (see 'EU rejects Indian grapes’, Down To Earth, May 31, 2010). But they were open to the idea of reviewing their standards. They sought data based on multi-location trials for two seasons, saying they would verify it with the European Food Safety Authority and revise their standards accordingly. So, we are in the process of getting data, from BASF (the producer of the growth promoter) and the National Research Centre for Grapes at Pune, which should be prepared by next year.

On the procedure for Codex Commission reviewing stringent rules

Normally a country would propose review of a particular standard to the Codex Commission. There is a protocol that needs to be followed. However, I have expressed the desire to all countries for an open door policy, wherein they could write directly to me if they are concerned about an issue.