‘Predictions wrong, but give indications’

India Meteorological Department is often accused of making incorrect predictions. The Ministry of Earth Sciences regularly gets funds to strengthen its services. This year too the ministry has set aside Rs 490 crore of its total budget to modernise the department. Sivananda Pai, senior scientist and director of Long Range Forecast at the department in Pune, tells Dinsa Sachan why the current forecasting methods go wrong 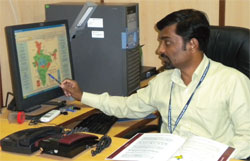 On many occasions monsoons have failed leading to droughts, but IMD did not predict them. Why?

Our predictions for rainfall during droughts were wrong only in 2002 and 2004. Between 1988 and 2001, our forecast for normal monsoon was qualitatively correct. It is true that we were not correct on all occasions, but we have done well since 2007 when we incorporated the ensemble forecasting system. This statistical model averages the results of all other empirical models. In this regard, IMD has started accepting inputs from climate research institutes within and outside the country. In 2009, we forecasted huge deficiency of rainfall all over the country. The actual rainfall was less than what we predicted, but at least we indicated a deficit.

IMD plans to introduce dynamic model to predict monsoon. What is it?

Unlike empirical models that rely on historical data, a dynamic weather prediction model involves 3D mathematical simulation of the atmosphere on computer. It is especially useful for predicting rainfall over smaller spatial and temporal scale, which is not possible in the ensemble forecasting system.

Why is its introduction not agressive? What efforts are being made to develop it according to India’s needs?

There are two reasons for not introducing it agressively. First is unavailability of global data. Data from around the world is required to produce 3D simulation of the atmosphere. While some countries are embroiled in civil wars, others are so poor they do not have enough to eat, let alone gather atmospheric data. Areas around the ocean are also data sparse. Satellite observations provide only surface level data. Getting upper aid data is a problem without which accuracy cannot be attained.

Second, dynamic models rely heavily on computers and technical expertise. Although computing power is now available, we need to make efforts to attain technical expertise. Predictions of dynamic models are not accurate enough for operational forecast. Research institutes in India, therefore, use it for experimental purpose. IMD installed it in 2003 in collaboration with the Indian Institute of Science in Bengaluru.

Research institutes across the country are developing innovative dynamic models as part of the National Monsoon Mission launched by the Ministry of Earth Sciences last year. We hope within a few years scientists will develop a fully Indian dynamic model to predict rainfall.

Last year government signed an agreement with the US for collaboration on monsoon. What was its need when the US does not get rainfall via monsoon?

We will be working with American scientists as part of the National Monsoon Mission. They have a highly effective dynamic model for rainfall prediction. We will try to tailor it to India’s needs.

How can we improve our short range forecast? Why can we not emulate countries like the US for day to day predictions of rainfall?

Weather conditions in India and the US are different. Indian monsoon is unique and complicated. Changes occur within the season. This intra-seasonal variability of the monsoon has a huge influence on seasonal predictions, especially during years when the effect of the Indian Ocean and the Pacific Ocean is less.

To improve its short range (two-three days) and medium range (four to 10 days) forecast, IMD is implementing automatic weather system network and installing Doppler radars along the coastal belt. These will monitor and predict hurricanes and tornadoes. Also, for prediction of heavy rainfall, radars give better results than satellites. The entire USA is monitored by a network of weather Doppler radars which can capture severe weather systems and their movement. In the US they are a necessity as it gets hundreds of tornadoes in a year. Radars help officials warn people 15 minutes before a tornado strikes. In India we may not need the radar network.