‘Restore land to tribals; allow them to be self-reliant’

K K Usha Raju took charge as president of Attappady block in Kerala seven months ago. She is 31 years old and belongs to Muduga tribal community. She has had formal education up to intermediate level. Her husband, Raju, is a wage labourer. She spoke to M Suchitra in detail about the plight of tribals in Attappady in the backdrop of the recent infant deaths 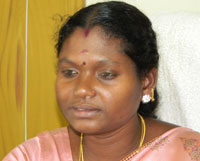 What do you have to say about the recent deaths of infant due to malnutrition?

Infant deaths did not happen in one day. They indicate the plight of tribal communities here. They indicate the social and economic backwardness of tribals and the apathy of the state government and the general public. Iron and folic acid tablets and supplementary food from anganwadis will not sustain us. The question is why tribal children, women and men have poor health.

What is the real reason?
Poverty.

Our traditional livelihoods were farming and cattle rearing. We were dependent on forests. Then we lost our rights on forests and our fertile lands got alienated. Most of us have lost a good chunk of our land to the forest department and the settlers. Settlers have usurped most of the fertile land in the valley. Tribals are forced to live on parched hill slopes, which is not suitable for growing food crops. Wild animals often destroy whatever they grow there. The eastern part of Attappady gets little rain and it has no irrigation facility. Most of us are wage labourers. Educated people among us do not have jobs. There are a good 100 graduate and some post-graduate tribals in Attappady. Another reason for poverty is addiction to alcohol. Men’s wages are wasted on alcohol.

But some tribals lease out cultivable land to settlers voluntarily. Is that not so?

Yes. What else can they do? They do not have resources for farming. There are three Krishi Bhawans in Attappady under the agriculture department, but tribals never get help from them. The department gives subsidies to settlers for growing crops such as pepper, ginger, sugarcane and banana. Banks do not give loans to tribals because they do not have documents for their land. The department forced tribals to adopt the settlers’ crops and use fertilisers and pesticides.

Has the Forest Rights Act been implemented?

No. The process has just started. In half of the settlements, forest protection committees have not even been formed.

What do you think about the packages announced by ministers?

Some political parties have distributed money among tribes. I am against such packages. We have not asked for free ration or money. Are tribals beggars? Such gestures will not help us. Instead, we will lose our self-respect. The government and political parties should address basic issues such as alienation of land and our food security. Allow us to be self-reliant. In the past few years, poverty among tribals has increased drastically.

Availability of wage labour has come down in the past two years. When Attappady Hill Area Development Society (AHADS) was implementing its Rs 219-crore project, wage labour was available throughout the year. Wages were also higher than what is given under the Mahatma Gandhi National Rural Employment Guarantee Scheme (MGNREGS). AHAD’s project was completed in 2010. Under MGNREGS, each family gets only 40-50 days of work a year. Wages also get delayed. The programme was stopped for a few months, and wages were due. (In Attappady Rs 23 lakh was pending to be distributed as wages.) After the deaths of infants, employment guarantee scheme has been started again.


What should the government do to reduce poverty and malnutrition?

If the government and political parties sincerely want to do something, they should restore tribals’ land, help them grow traditional and other food crops, and give jobs to all educated tribals. Jobs will inspire others to study. Literacy rate among tribals is still as low as 30 per cent.

But the state government has implemented many welfare schemes and projects for the development of tribals. What about that?

None of them has benefited us. Corruption was rampant in Attappady. Contractors and politicians have pocketed a lot of money from the welfare schemes meant for us. Besides, nobody asked us what we really wanted. Projects are planned by others and imposed on us.

Attappady is the only tribal block in the state, but tribals are a minority here. We are living among our exploiters—settlers, contractors and politicians. Over the years, tribals have become very submissive. They sit silently in gram sabhas. And if they do raise their voice, they are immediately silenced. They know from their past experiences that nothing will be decided in their favour. Besides, they have become indifferent. Another reason is that tribals are divided among different political parties, which are dominated by settlers.

You are a block president from a tribal community. Presidents of two of the three gram panchayats are also tribals. Does that not make a difference?

No. We are controlled by political parties. Panchayat councils are dominated by non-tribals. In the 13-member block council, only three are tribals. They do not like it when we air our views freely. When the chief minister visited Attappady after the infant deaths, during a public function, I said openly that distributing free ration and money is not good for tribals. My party has warned me not to speak so.

Then how did you become president? Is it reserved for Scheduled Tribe?

No. I was in the Kerala Congress (a part of the Congress-led United Democratic Front alliance, in power in the state at present). We were seven and they (CPI-M led Left Democratic Front, the opposition) were six. Because of some problems in my party, I had to join the other group. With that they became seven and became the ruling front in the panchayat. So they made me president. I do not think I will be able to do much for tribals as the block president.

Were you consulted while formulating new action plans in the wake of infant deaths?

No. Even now, nobody asks us what we want. There are Mooppan Council (council of tribal chiefs), Thaikulasangham (tribal women’s group) and other tribal organisations and activists. No one was consulted. Officials still feel we do not know what we want.

Did ministers speak to the tribal organisations?

No. Seven ministers, including the Central rural development minister, the chief minister, social welfare minister, minister for tribal development have visited Attappady after deaths of infants became a big issue. They visited one or two settlements where babies have died. They were always accompanied by police, officials, politicians and media. They did not bother to meet us and speak to us separately. How then will they know what we want?

Let me tell you, neither the government, the politicians or the general public, is really bothered about us. And, that is the crux of all the problems we face now.