River restoration is not just an ecological act

Despite decades of restoration efforts by a rich ensemble of state-development actors, cultural heritage votaries and rights activists, the Bagmati is nothing less than a sewage canal by the time it meets its tributaries in Kathmandu. In her book Reigning the River: Urban Ecologies and Political Transformation in Kathmandu Anne Rademacher, assistant professor of social and cultural analysis at New York University, chronicles how the river’s degradation resonates with the perceived social, cultural, religious and political disorder in the tumultuous democracy. She shares her insights with Aditya Batra 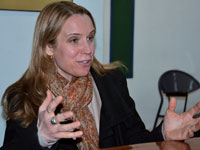 The Nepal government has set up a high level commission to restore the flow of the Bagmati. Will it bear fruit?

I don’t think so. There is always great hope when commissions like this are formed. But lack of political continuity in Nepal means such commissions function in a detached manner. Part of my book explores the importance of political continuity that allows such commissions to maintain a dialogue with its constituents. Plans for improvements tend to fall apart with the change in political regime. During the emergency (People’s War that continued from 1996 to 2006), any so-called environmental improvements were not attached to the natural political reality of common benefit. This is unsuprising. Yet it is ethnographically important to look at that history, especially at a time when the “Bagmati fervour” is at its height, so that we do not repeat the mistakes.

What is urban ecology?

To an ecosystem scientist, urban ecology means the bio and geo-chemical processes in a city, for example, the water cycle and energy budget. But to me, that is only one layer of the human-environment interface. Urban ecology has social, political and historical layers that cannot be considered separately. I see it as the overlap between urbanisation and environmental transformation in a specific cultural and political situation.

I am trained in ecosystem science. So when I look at a river system, my first inclination is to pronounce river degradation according to the morphological deterioration and water quality indicators. How do I fix it? Maybe, by building sewage treatment plants and through morphological mitigation. Done. But everything that we do is irrespective of our understanding of nature. The central argument of the book is we cannot sit just in either camp—be it the socio-political analysis, or an environmental, ecological and scientific analysis. Somewhere there is an overlapping ground that constitutes a challenge for environmental and socio-political vitality.

I looked at three different kinds of perspectives on restoration.

The first is by the state and development actors, those rooting for development on patriotic grounds, government ministers and professionals writing up management plans. This group tends to have similar attitude towards politically charged questions like what should happen to the large migrant population settled along the banks of the Bagmati and the Bishnumati in the valley, and whether they are responsible for the river degradation. Due to the state’s dependence on international funding since the middle of the 20th century, working with government officials in Nepal means also working with international development actors. That is extremely problematic for autonomy on any environment or social efforts.

The second is by cultural heritage activists, such as Hutaram Baidya (see ‘A civilisational loss’, Down To Earth, August 16-31, 2011), who are foregrounding what they consider to be a set of cultural resources and values that get violated with the violation of the environmental integrity of the Bagmati. Baidya believes in the ‘Bagmati civilisation’. The term has galvanised people into a great deal of political action. It also designates who is entitled to this riverscape. It is no more valourous than other perspectives but it is politically and culturally powerful.

For the third vision, I look at people like Lajana Manandhar of Lumanti Support Group for Shelter. They are the advocates for the landless poor settled on the river banks. During the emergency, thousands of landless poor were seen to constitute an actual feature of the degradation of the Bagmati. So the environmental battle to save the Bagmati is also a battle to figure out what a sustainable city looks like; what the people who have migrated to the city for socio-economic reasons or because of the war (refugees) are entitled to?

The three sets of actors agree that the river is hopelessly degradaded. But each group defines river degradation and restoration in a different way. Even inside those camps, the stories are constantly changing. So we have a moving target when it comes to the social and political understanding of what is wrong with the Bagmati.

Do these different actors engage with one another, or are they entrenched in respective camps?

There was a desire for dialogue, but as is often the case, boundaries are drawn both politically and socially. In certain political moments, for instance, stakes were too high for squatter housing advocates to even be seen to be negotiating with other groups. But as the political context shifted, dialogue was possible again. So these windows would be constantly opening and closing—opportunities for all three groups to sit around a table and invent something agreeable to all.

Many in Nepal are dismissive, or wary, of gestures of help from India.

The book talks about the Guheshwori sewage treatment plant built just north of the Pashupatinath temple complex to keep the stretch of the river clean. There is tremendous pride in having built it without Indian or international assistance. The book looks at how important it is for us to see our identity wrapped up in the condition of the environment, and to what extent is the environmental degradation emblematic of a social and political dysfunction. There are several examples of this. The state is using the creation of parks (the contested UN Park on the banks of the Bagmati) as a spectacle, saying, “look how powerful we are. Look at what we can do despite two decades of government stagnation.” This shows how environmental change comes to stand for the potential of social and political power. The treatment plant story is also a way of distinguishing the Nepali effort. 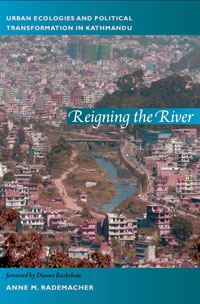 Today, there is a kind of layering of initiatives that I did not see over the few decades that the book covers. That layering allows, for instance, the Bagmati Festival, which brings in journalists and well-known figures from various fields who go “brownwater” rafting down a stretch of the river. That also allows a relatively elite segment not only to reaffirm their commitment to the Bagmati, but also to commit resources and efforts to help improve it. There are also layers of initiatives being undertaken by the government and non-profits. At present, restoration is not simply a bourgeoisie effort. The festival serves not to just raise awareness, but to organise action.

Is your book more a commentary or is it also prescriptive?

There is no specific policy prescription. I did look at different policy initiatives over time. Considered in isolation, they seemed like great roadmaps for river restoration. I wonder why they did not work, and come back to the problem of political stability. But political volatility characterises reality; it characterises the present and future. This is true for all environmental issues—climate change is the classic example.

When I first took the Bagmati problem to my professor, he said he does not know if this warrants thesis material because river restoration is pretty formulaic in a scientific sense. I also sit in an environmental studies department in New York with a bunch of scientists who say science gives us the instruments to understand the change and the instruments to make the changes we want. I, in a way, reject that. Science gives us only a piece of the question.

The parallels with Indian river restoration efforts are too many to ignore.

I have been interested in the efforts to restore the Yamuna. But when it came to putting this book together, I made very few connections. Even though the Bagmati is a tributary of the Ganga, it was important to recognise Bagmati as Bagmati, as a Nepali problem.