Thomas Knutson is a research meteorologist with the National Oceanic and Atmospheric Administration (NOAA) in the US. He was the co-chairperson of the World Meteorological Organization (WMO) team on tropical cyclones and climate change which publicised its results in 2010. He speaks to Dinsa Sachan on the impact of climate change on tropical cyclones on the sidelines of the second international conference on Indian Ocean Tropical Cyclones and Climate Change, from February 14 to 17, in Delhi. Excerpts: 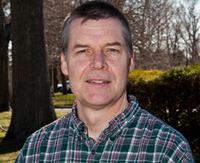 According to WMO’s 2010 findings, frequency of tropical cyclones will decrease in the climate change scenario but their intensity will increase. Is this already happening?

Yes, but we cannot see a detectable effect of human activity on it. This is different from global rise in temperature, which is a direct consequence of human activity. Looking at projections, increase in intensity will be upto 10 per cent but that’s too small to be detectable now. It may not be small then –it may in fact be important then. Global warming is definitely about sea level rise (SLR). If storm climate remains same, SLR will cause great surges, and impact coasts. Tropical cyclones are one aspect of the whole story, and it’s not showing any dramatic effects at this point.

What’s the science behind the frequency decreasing and intensity increasing?

Firstly, it needs to be understood that the result is a global simulation and results vary across basins. We think atmosphere warms more than surface, which stabilises the atmosphere, leading to fewer storms. There are a couple of theories to explain the increase in intensity. From our high resolution models what we understand is rising surface sea temperature (SST) and upper atmospheric temperature are at tug of war, and SST wins out to provide more energy to the storm.

Only 5 per cent of all tropical cyclones occur in the Northern Indian Ocean and it even does not experience the most intense storms, so why are they so damaging?
A lot depends on the infrastructure in place, and the geography. Let’s look at Bangladesh, which has experienced some of the most disastrous storms in the past few decades. The water near their coastline is shallow–something very conducive to strong storm surges. Shape of the coastline, which is funnel-shaped, also accounts for higher storm surges.

What are the current challenges scientists studying tropical cyclones face?

How can India improve its cyclone detection?

As announced during the conference, India plans to employ aircraft to monitor cyclone. You drop sensors into a storm from an aircraft, and this helps in predicting the trajectory of the cyclone. This technology has been in use for decades in the US now, and it has been very useful in predicting which part of the country it will make a landfall on.