‘It will open up a new area of Mars exploration’

As NASA's Ingenuity touched down on Mars, Down To Earth spoke to Ingenuity’s chief engineer J (Bob) Balaram on the significance of the flight attempt and the advantages of a flying probe in the study

On February 18, 2021, NASA’s Perseverance rover landed on Mars. The space agency’s first astro-biology mission aims to look for signs of ancient microbial life and collect samples of rock and soil to be brought to Earth in a future mission.

On board the rover is Ingenuity — a helicopter whose main purpose is to attempt a flight in an atmosphere only 1 per cent as dense as Earth’s. The date of the flight is not scheduled, but it is likely to be in May 2021. 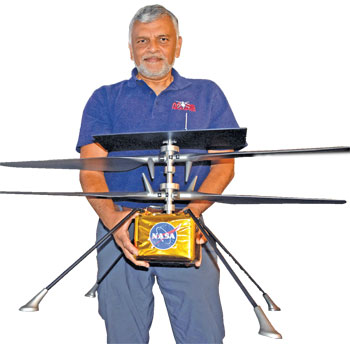 Dakshiani Palicha: If Ingenuity’s flight is successful, how will that change future explorations?

J (Bob) Balaram: I think of it as three R’s — reach, range, resolution. Helicopters, just like drones here on Earth, have the ability to get to places where it is very difficult, if not impossible, for a rover or an astronaut to reach. Steep cliff walls, caverns and other geological features are present on Mars. So this ability would be of interest to the scientific community.

Next is range and resolution — even though Ingenuity is not going to fly very fast, the vehicle is capable of forward flights at 20-30 metres per second and could cover kilometres in a day. We will not try this, but inherently, helicopters have a much larger range than rovers.

Mars has already been explored by various orbital missions — Mangalyaan, the Mars Reconnaissance orbiter, the Trace Gas Orbiter and now the Chinese and the UAE spacecrafts.

But imagine exploring all of Earth only from the orbit; you would miss a lot. The ability of a helicopter to carry a high-resolution instrument, like the camera, to get up close and travel long distances opens a new area of Mars exploration.

DP: How did you arrive at the final design of Ingenuity?

JBB: We designed many prototypes and built two engineering development models, one of which saw a full flight campaign as a spacecraft. This model had all the avionics, batteries, solar panels and went through a flight test programme in a 762 cm by 243 cm diameter chamber, which we pumped down to Mars pressures and filled with carbon dioxide. The second version of the model went through a full environmental stress campaign, including low temperatures, vibration and shock.

As part of the design we also had a judicious mix of radiation-hardened parts and commercial off-the-shelf parts. We were strict about the mass of the aircraft. We had a long and complicated test programme which involved everything from simple hover flight tests all the way to building our own wind tunnel to understand how things behaved in side-winds. We flew avionics and sensors on a hexacopter platform to verify that the onboard navigation system is doing a good job of looking at the terrain.

DP: What are the challenges of attempting a flight on Mars?

JBB: The helicopter’s design itself was a challenge. How do you fly something in an atmospheric density that is less than one per cent of the Earth’s surface? It’s like trying to fly at a height of 35,000 m. There is a different set of aerodynamics and considerations here. Ingenuity also has to be a full spacecraft; it has to survive the launch, radiation and vacuum in space, entry and descent into Mars, landing loads and high gravitational forces. The Martian environment can be as low as -90 degrees Celsius at night. And it has to be extremely safe and clean for NASA’s first astro-biology mission.

DP: Does Ingenuity have any other science goals?

JBB: It is quite strictly a technological demonstration. It is meant to send back engineering data to inform us what the next generation of such tests will be. We will have the data to validate our models and then design more systems.

DP: What are the technological advancements in this mission that sets it apart from others?

JBB: The major jump in landing capability that Perseverance brings compared to Curiosity [NASA’s fourth Mars rover that landed in August 2012] is because of an active vision-based terrain-relative landing system on Perseverance.

While coming down, it can consult a map and decide where exactly to land. Previous rovers did not have that ability, and so you had to pick a safe landing spot. But those are also not always the most interesting spots from a scientific perspective. The Jezero crater [where Perseverance landed] is an ancient riverbed with alluvial fans and steep walls, so we could not have sent the previous rovers there.

The instruments on Perseverance are also next-generation. For example, there is a camera with zoom capability. Another demonstration included is technology to extract oxygen from the air of Mars.

DP: One of Perseverance’s goals is to look for past life. What would this discovery signify?

JBB: Right now we have a dataset with one data point — the Earth. It will be very interesting to see how life could have evolved on another planet that was, in its early days of formation, very similar to the Earth’s oceans and warm climates. Any signs of life we find are going to be microbial. That’s because in its early stages of development, Mars was warm and wet.

Even within the solar system, there are other places like the ocean worlds under the ice of Europa [one of Jupiter’s moons] or under that of Enceladus and the thick hydro-carbon soup of Titan [both Saturn’s moons], that have enough energy sources for life to evolve. Having more data points from an astro-biology perspective would be very interesting. And from a social and philosophical perspective, I think we all want to know whether there are other things out there.

DP: Will the evolutionary samples found on Mars hold clues to the Earth’s future?

JBB: There is obviously an interest in climate science, where people study why Mars lost its atmosphere or why Venus is hot. In general, having people pay attention to a broad diversity of data — be it past life, climate-related comparisons or formation-related aspects — adds to our knowledge of how processes work on Earth. We can then develop a model here and check if it’s correct as against Venus or Mars. Having a diverse set of eyes looking at a diverse set of problems across the solar system will tell us a lot more about the Earth.

This interview was first published in the 1-15 March, 2021 edition of Down To Earth