Scientists, activists are locked in

Deepak Pental, former vice-chancellor of Delhi University and currently director of the university’s Centre for Genetic Manipulation of Crop Plants, is as controversial as scientists can get in India. He has come under flak from fellow scientists who ripped apart his paper “Detrimental effect of expression of Bt endotoxin Cry1Ac on in vitro regeneration, in vivo growth and development of tobacco and cotton transgenics” (written with 10 other scientists) and published in the June 2011 issue of the Journal of Biosciences. However, the lobby against genetically modified (GM) crops loved it because it bolstered their case and they distributed the paper widely. But Pental continues to be in the cross-hair of the anti-GM activists who oppose his GM mustard (Brassica juncea) and its field trials in Rajasthan. Pental, who has spent the last 16 years developing this mustard, returns the compliment by calling the activists “hysterical people you cannot communicate with”. In an interview to Latha Jishnu and Jyotika Sood, the geneticist says both scientists and activists are locked into their respective positions, making rational debate impossible. Even scientists, he says, are not willing to discuss issues related with transgenics candidly 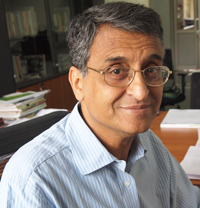 Those who oppose GM crops have valid apprehensions.

We need to be critical of these people. What is the solution they are giving? I don’t understand why the government is so afraid of them and who subscribes to their views. Before raising such an outcry, they should try to give an alternative solution. Did anybody ask NGOs and activists, can you please develop something and give it to farmers as an alternative to Bt cotton? Their job is just to condemn and give narratives. As a scientist, people will say that I’m giving a contrarian view on Bt cotton in case I don’t supportit. But as a scientist I have to provide an alternative.

They have the support of international scientists. In fact, some of the anti-GM activists are scientists themselves

The point is that such people are locked in—they have to reject it—just as we scientists are locked in by a particular way of thinking. Some months ago, I had published a paper stating that Bt gene (Cry 1Ac) is toxic to the plant. Why we did that is because we believe that truth should prevail. Bt toxin per se is not toxic to anybody, but when you put it in the plant it decreases the yield by 10 to 15 per cent. Nobody wants to accept it. People now accuse me of diluting the case for transgenic crops.

With Keshav Kranthi (director, Central Institute for Cotton Research) also this is happening. People are jumping on him saying, why do you have to write something negative? Kranthi is just cautioning the country as a scientist that other pests are becoming very prominent. He is doing the right thing.  He is not saying that anything is wrong with Bt, but he is just saying that there is life beyond Bt. The fact is that Bt is no longer the miracle that it was. Whatever benefit you wanted to get out of the gene you’ve reaped it. In fact, the major question is how to prolong the life of this gene. No pest and pathogen is going to allow your genes of resistance to last for more than 10 to 15 years. This is a scientific fact.

How many rust-resistant genes have been put into wheat and how many have died out? Their number would be in tens if not hundreds. So, you have to replace genes. You can do it either through sexual hybridisation or you can splice it through genetic engineering which cuts the time by a third. The recent example which shocked me was the case of the phytophthora-resistant gene being put into potato. You are taking a very innocuous gene from one plant and putting it into another plant. (Potato blight is caused by Phytophthora infestans, the same fungus responsible for the Great Potato Famine in Ireland). But some people don’t want it. All I’m saying is that irrationality can arise in any society. Any society can turn foolish, can go overboard. European countries are becoming anti-science

The fear is primarily of transgenics

Take Bt Cotton. For the last 30 odd years, Bt suspensions were sprayed on vegetable crops to ward off insects and pests. There is a whole history of it and if somebody wants to they can find out how much was sprayed on lettuce and all these crops and how much of this Bt got ingested by human beings. There is not a shred of evidence which says that Bt protein has done anything toxic to millions of systems except on the insects it affects. There have been papers in Science and Nature on its effect on Monarch butterflies which were later debunked.

But there is a difficulty with Bt?

Our difficulty with Bt is that we are not able to still digest this fact that human beings through research have developed systems in which information can be taken from a very distant organism like a bacillus and put into a plant. There may be some people who are not comfortable with the idea and I can accept that. There could be food fundamentalists. For example, some people don’t eat onion, but scientifically there is no reason. Similarly, people say that they don’t want to have garlic because it smells.

Some people suggest organic as an alternative.

Do you know how organic will come into India? The moment farming communities get alternative source of cooking, all your animal excreta will start going into the land. Wherever farmer has gas why would they want to burn cowdung? The moment you give gas or electricity for cooking to the farm community, they will divert cowdung to the soil. It will automatically increase carbon content of the soil and help your exhausted soils come back. But none of these activists talk about this. They don’t talk about crop rotation, what alternatives we have. They are such hysterical people that it is difficult to communicate with them. The NGOs were complaining that Bt is a poison and goats were killed. If you feed a goat with the lousy remains of cotton, the goat will give up. The reason could be pesticide spray and may be the goats were feeble.