Southeast US will bear the worst of this year’s winter, says AccuWeather

This US-based independent weather agency set off gasps of dread and many counter-forecasts last week when it indicated “the return” of the polar vortex in its annual winter outlook. Many parts of the United States and Canada are only just recovering from the memories of an extremely harsh winter last season, with persistent sub-zero temperatures and very heavy snowfall. AccuWeather’s senior meteorologist, Jason Nicholls, demystifies the polar vortex and explains how it is expected to impact weather this year, in an interview to Jemima Rohekar

The polar vortex is nearly a year round feature that varies in location and strength. It is at its weakest at the poles. The vortex strengthens in the winter and is usually displaced south into the mid-latitudes by the jet stream.

It will strengthen again this winter as usual as Arctic air builds up in the northern latitudes. The question to ask is where this vortex will move. Last year, the vortex became quite strong and persistently dropped into eastern Canada and eastern US.

This winter, the expected global pattern would tend to favour occasional to frequent visits by the polar vortex into eastern US. But the cold should be less persistent in eastern US than last year. There are also indications the polar vortex could bring a few cold shots to northeast Asia, especially in January and February.

Which regions will be worst-affected? Which regions that were badly affected last year are likely to be spared this year?

Southeast US could bear the worst of this year's winter with frequent cold shots coupled with what looks like an active storm track across this area. Northeast US will have some cold this winter but the unrelenting cold of last year is not expected. The interior northeast could be snowier while some major US cities in the northeast, such as Philadelphia, New York City and Boston, may experience less snow. The UK and northwest Europe which experienced frequent powerful storms last winter should not be as stormy as the storm track looks to shift towards southern Europe in the winter. 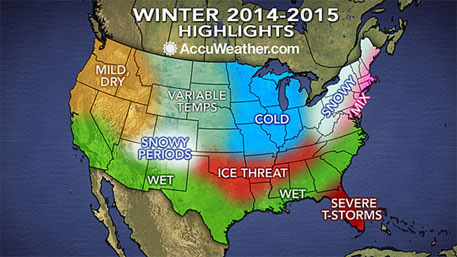 How intense is it expected to be?

The polar vortex may become quite strong on occasions this winter but will likely not be as persistently strong as last winter. In terms of temperatures, we feel eastern US will likely be colder than normal this winter. An active southern storm track across the US means frequent storms from the southern plains to the southeast, with storms occasionally turning northward along the east coast of the US.

Northern Europe and northeast Asia will also experience bouts of cold this winter as the polar vortex moves, which can lead to temperatures averaging near to below normal in these areas, unlike last winter when these regions were mild most of the winter.

The US National Oceanic and Atmospheric Administration (NOAA) has denied a revival of the polar vortex. Why is their forecast different from that of Accuweather's?

NOAA's forecast and others are based on different interpretations of computer models as well as teleconnections. One such teleconnection that will play a part in this winter's pattern is  El Niño or warmer than normal pool of water over the equatorial Pacific. Earlier this year, several models showed a moderate to strong  El Niño developing later in the summer. They now show a weak  El Niño developing in late fall/early winter. The NOAA forecast is pretty close to what one might typically see with a moderate to strong El Niño.

We believe any El Niño this winter will be weaker than what NOAA believes and thus, will not be the primary factor but one of several factors that will dictate the winter pattern. The long range team at AccuWeather also thinks the weak  El Niño will be centered closer to the dateline and not towards South America as you see in a typical  El Niño. The position difference of the El Nino (or warm pool of water in the equatorial Pacific) will cause variations in the position of the jet stream that are different for El Niños centered farther east.

The NOAA forecast is not vastly different from ours overall but the differences may be due to our thinking regarding  El Niño as well as how we interpret the global pattern versus how their team believes things will develop.

When the US was reeling under the effects of an extremely harsh winter last time, freak hailstorms hit six states in India, destroying millions of hectares of standing crop. Is global weather expected to align with local weather conditions in India to produce similar conditions once again this time?

The pattern this winter does not look quite the same as last winter, though there are a few similarities, especially over northeast Pacific into western Canada. The overall feeling is that India, especially southern India, will be drier than last year and drier than normal. However, there are some signs that there will be stormy periods across northern Pakistan into northwest India in December and perhaps again in mid- to late-February.

Do you see a connection between the breaking of the polar vortex and global warming and melting of ice in the Arctic ocean?

I don't see any direct connection to global warming. The fluctuation in strength of the polar vortex is a usual occurrence  and on a small time scale so it really can't be tied to global warming. As far as sea ice, Arctic sea ice has actually been building since bottoming out in September. Recent data shows the ice extent is above the minimum we saw back in 2012, but is still running below the long term average.