HAKIM MOHAMMED KHALID SIDDIQUI, director of Central Council for Research in Unani Medicine, New Delhi, tells VIBHA VARSHNEY that Unani medicines have the potential to cure a host of diseases 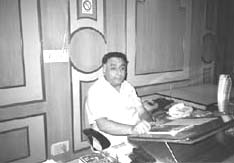 According to this system, what is the reason behind one's ailment and how can it be cured?
Health is affected by our surrounding conditions. Therefore, a balance between the human body and the environment is important. Pollution and unsanitary conditions make the body weak and medicines then have to be given to overcome the weakness. The medicine helps in collecting the disease-causing factor in the body and then it is removed from the body. The natural forces in the body are used to keep the body in a disease-free state.

Tell us about the new malarial herbal drugs developed by your institute.
The new drug that can cure malaria is called unim 152, prepared from Artemisia absinthium ( afsanteen ) and Caesalpinia crista ( karanjwa ). The drug has been studied on 30 patients, of which 23 were found positive for Plasmodium vivax , six for P falciparum , and one positive for both. The drug was found effective in controlling both the pathogen and in case of P vivax showed 87 per cent therapeutic effect.

Another drug unim 151 has been found 85 per cent effective in controlling the malaria caused by P vivax. The drug works by checking the multiplication of the parasite in the blood. The drug acts as an antipyretic and an analgesic. It costs 50 paisa per capsule and two capsules per day have to be taken for a period of four days to two weeks depending on the severity of the case. The Central Council for Research in Unani Medicine ( ccrum) has approached National Anti-Malaria Programme ( namp ) to include these herbal drugs in its programme.

How do you decide the disease the centre is going to work on?
The most important criterion for choosing the disease is the absence of treatment in other systems of medicine. A scientific advisory committee consisting of experts from different fields of science and members of the ministry of health decides the diseases that need to be worked on.

What are the grey areas in the Unani system?
The biggest drawback is that surgery has not been developed fully in this system. There is also no treatment for an emergency condition such as an accident or heart attack. The system had a setback during the British rule and very little development occurred during that time. Even after independence , the government had been busy promoting allopathic medicines. Many do not take the Unani system seriously. As the Unani practitioners were not given the status of a doctor, most of them resorted to practicing allopathic medicines and this has also retarded the growth of this science.

What should be done to increase the acceptability of the system?
At the Kumbh Mela this year, we organised a Unani medicine camp where people made a beeline to get treated. So, acceptibility of cheap and effective Unani medicine is no problem. But it is not given the seriousness it deserves. Each hospital should have a separate wing for alternative medicine. In the international market, the Unani medicines should be validated using the Federal Drug Administration's guidelines.

We are working with the Council of Scientific and Industrial Research on this and studying the efficacy of Unani medicines and carrying out clinical trials. Patents have to be taken and then the process of commercialisation has to be jacked up. It is necessary to work in close collaboration with the industry, as it is necessary to understand their needs too. Besides, the practitioners should not mix the different systems of medicine as this does not allow development to occur.

What is the institute doing now?
ccrum has applied for seven patents at the moment. Out of these, one is for malaria, two for infective hepatitis, two for bronchial asthma and two for rheumatoid arthritis.

In the future, we intend to focus on reproductive health, childcare, women's health and neurological disorders like Alzheimer's disease.