Keshav Raj Kranthi, an entomologist by training, is director of the Central Institute for Cotton Research, Nagpur. He has developed an extensive database on bollworm resistance to insecticides and Bt-toxins. Kranthi’s analysis unsettles both industry and activists fighting genetically modified crops. He speaks to Latha Jishnu on the disturbing trends in Bt cotton cultivation. Excerpts 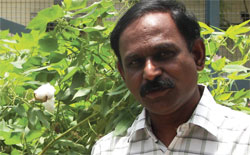 Why have yields stagnated?

Yield stagnation at an average of 520 kg fibre per hectare over the past five years could be because of several factors, including bad weather and poor agronomic management. But over 800 Bt cotton hybrids developed by private seed companies have been approved for commercial cultivation as ‘truthfully labelled seed’ by GEAC. It would have made a huge difference if only hybrids suitable for specific agro-ecological regions had been identified as per the All India Coordinated Cotton Improvement project norms. Farmers have been constantly experimenting with the 150-200 Bt hybrids generally available. The improper choice of hybrids is resulting in yield losses as well as confusion.

What are the consequences?

There has been progressive nutrient (macro and micro) depletion because of one hybrid after the other being cultivated. This also affects yields because Bt cotton hybrids utilise more nutrients to yield more, so the soils are getting progressively depleted. Cotton hybrids are showing nutrient deficiency symptoms in many regions, specially in rain-fed zones where wilt and leaf reddening are severe.

Why is insecticide use rising?

Intensive cultivation of Bt hybrids without the use of refugia has been hastening resistance in bollworms. Excessive use of imidacloprid as seed treatment and foliar sprays on Bt hybrids has resulted in insecticide-resistant leaf hoppers and is causing more damage. Threats from new insect pests such as mealybugs, mirid bugs, jassids, thrips, pink bollworm and diseases such as cotton leaf curl virus and wilt are increasing. This has resulted in hot spots. As a result, cost of insecticide use has been increasing, from Rs 579 crore in 2006 to Rs 880 crore in 2010.

But you also say insecticide use halved after the entry of Bt cotton.

The use of Imidacloprid has increased enormously, while those of other insecticides decreased.

What do you mean by stewardship of technology?

Cotton varieties across the globe are known for their high sensitivity to photoperiod, local ecologies and environment. Over the past 60 years, Indian scientists developed varieties that had a reasonably wider adaptability. Several seed companies have used these as parents in many Bt-hybrids they developed, but released them indiscriminately. Good stewardship means developing Bt-varieties and Bt-hybrids to suit specific agro-eco-zones so that these could have resisted the local abiotic stress, pests and diseases, and yielded more through an appropriate package of practices developed for the region. This did not happen.

Some countries have higher cotton yields than India without the use of Bt technology. Pakistan, for instance, has average yield of 700 kg per hectare. Do we really need this technology?

At least 14 countries obtain higher yields than India without Bt technology, but bollworm pressure and the area under cotton in these countries are lower than here. Bt technology was necessary in India for bollworm control. The usage of insecticides for bollworm control has decreased significantly (about 50 per cent) because of Bt cotton. More importantly, bollworm damage declined. There have been obvious benefits, of quality, in good boll opening and proper fibre maturity. However, straight Bt-varieties with high harvest index (more bolls and less foliage) could have helped enhance yields with lesser fertiliser and pesticide in rain-fed regions.

You believe that Bt in varieties is a much better idea.

Bt technology in straight varieties would have helped farmers save their seed. Also, bollworm control would have been more efficient and effective in varieties as compared to hybrids in which the gene segregates and a particular proportion of developing seeds in bolls of Bt cotton hybrids does not contain the Bt toxin. India is the only country where Bt cotton hybrids are grown and that, too, in more than 90 per cent of the area.

Can India ever return to non-Bt cultivation of cotton?

Yes. It is possible that Bt cotton hybrids may enter into a ‘fatigue’ stage within the next few years because of the high cost of seed production, emerging pest and disease problems, nutrient deficiencies, inconsistent performances, etc. If that happens, India would return to varieties, some of them with Bt and some non-Bt. 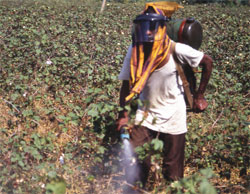 Farmers say they have no choice in seed because of non-availability of conventional non-Bt seed.

Conventional seeds can be produced by state seed corporations, state agricultural universities and agricultural institute farms. But there is hardly any private seed company left in the market which produces non-Bt hybrids.

Isn’t Bt cotton promoting monoculture which is a threat to agricultural sustainability?

This concern needs to be addressed on priority basis. Reduction in the area of intercropping can hasten the development of bollworm resistance to Bt cotton. Besides, the new technologies entering the market, such as Roundup Ready-Flex from Monsanto, although useful in overcoming labour shortage are not geared for intercropping. Earlier, pigeonpea, soyabean, maize and jowar were cultivated with cotton to reduce risk for the farmer and ensure sustainability.

What is the outlook?

New technologies will continue to make their grand entry since Bt cotton is seen as just the beginning. But we need to formulate stewardship plans based on robust native science and knowledge and stop the release of products for short-term commercial gains—something several Indian seed companies have been resorting to for the past decade.

Is the introduction of more and more stacked gene Bt cotton hybrids the solution to falling yields?

Stacking of genes for insect control potentiates toxicity to insects, apart from delaying the development of resistance. Stacking of genes can also help in either imparting new traits such as weed control, drought resistance, etc., which may have only a minimal impact on yield enhancement.

What happened to the Bt cotton varieties developed by CICR? I believe there were two varieties. Why were they withdrawn abruptly from the market in 2010?

The Bt variety, Bikaneri Narma-Bt (BN-Bt) and a hybrid Bt-NHH-44 were developed in a collaborative project by the National Research Centre for Plant Biotechnology (NRCPB), Delhi, and University of Agricultural Sciences (UAS), Dharwad. CICR facilitated bio-safety and commercialisation in 2008. These were provided to farmers through state seed agencies. While Bt NHH-44 performed well, there was a mixed response to the variety, BN-Bt. CICR has not withdrawn the variety and hybrid. ICAR has asked UAS Dharwad and NRCPB to look into reasons for the mixed response and refine the material if needed. New elite Bt varieties are being developed by CICR and will soon hit the market.

You pioneered the development of a simple test to identify the Bt gene in the seed packets quickly and cheaply. How well is this doing?

Yes, it was developed when I was a senior scientist at CICR. What we pioneered were immunological Bt detection kits and DNA-based PCR tests to detect GM crops that express any of the Bt genes such as Cry1Ac, Cry2Ab, Cry1F, Cry1C and also with generic markers. CICR has obtained several national and international patents – in India, South Africa, China and Uzbekistan – and commercialised these as Bt-Express and Bt-Quant. Each pack of 50 strips costs Rs 1,000. Farmer samples, however, are tested free of cost if brought personally. The kits have become extremely popular and Rs 4 crore worth have been sold so far. The Bt-detection kits have enabled regulation, streamlining and ensuring seed quality. All seed testing laboratories in the country are using the kits.

What are the results of the test done by CICR on the death of goats grazing in Bt cotton fields?

CICR has a team of three Veterinary scientists in its Krishi Vigyan Kendra at Nagpur. They conducted the study for three years (2007-2010) by tethering 12 to 18 Osmanabadi goats in Bt cotton fields for three months in the first year and for four months in the next two years during the peak vegetative period and reproductive phase of the crop. The seeds used in the CICR trials were not treated with any insecticide. The goats were healthy and no adverse effects were noticed. It is certainly possible that goats in AP may have died due to some other factor.