The many ways of GM contamination

Doug Gurian-Sherman, a senior scientist in the food and environment programme at the Union of Concerned Scientists (UCS), is among the most frequently cited experts on agricultural biotechnology. There is a reason for this. Gurian-Sherman is objective and meticulous in his analysis that is enriched by a long and varied experience with US government institutions and later with public interest and environmental advocacy organizations such as Center for Food Safety and UCS. At the Environmental Protection Agency (EPA), Gurian-Sherman was responsible for assessing human health and environmental risks from transgenic plants and microorganisms and developing biotechnology policy and at the Food and Drug Administration he was on its inaugural advisory food biotechnology subcommittee. In an interview to Latha Jishnu, the plant pathologist who has conducted post-doctoral research on rice and wheat molecular biology at the US Department of Agriculture laboratory in Albany, California, explains how biotech giant Monsanto’s unapproved GM wheat could have contaminated a farmer’s field in Oregon. Gurian-Sherman also explains why GM contamination is widespread across the world. Excerpts: 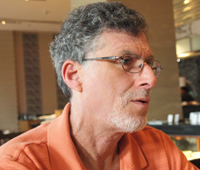 We understand that Monsanto scrapped its trials in 2004. Why has it taken this long for the contamination to occur? Could you explain how it could have taken place?

The contamination is likely to have occurred at the time of the field trials, that is, before it concluded in 2004. It could have been carried along since then, either by the farmer if he or she saves seed every year, or more likely, was part of contaminated seed that the farmer bought from a seed company or some other possible, but less likely scenario. We cannot know which until widespread testing of our wheat supply is done, which could take weeks.

Could there be other instances of contamination which have not come to light or have been hushed up?

It is quite possible that this is not an isolated incident – for this or other genes in any number of crops that have gone through field trials over the past 26 years. This is for two reasons. First, the provisions for preventing contamination that USDA recommends, such as providing certain isolation distances from non-GMO crops, cannot ensure that contamination will not happen. This assessment is based both on the many incidents that have already occurred and been documented and on what we know about the biology of gene flow, the possibility of human error (accidental mixing of seed), and so on.

Second, there is no routine testing for possible contamination from genes from experimental field tests. And the tools, for example, DNA probes to run tests, are not generally available since they are maintained in secret as confidential business information by companies. There are typically over a thousand field tests per year in the US for numerous experimental genes for many crops although most by far are for a handful of large acreage crops like corn, and most genes are for herbicide tolerance or insect resistance. And many field trials consist of several different actual fields, often in several different states. That is a lot of opportunities for possible contamination.

If you add all of this together, it suggests a real possibility that other experimental engineered genes could have contaminated crops in the past, but have never been detected. Usually, if this has occurred, it would be at very low levels, although there are some scenarios where contamination could be much higher.

It is also possible for field tests to be conducted in the US before any food safety assessment by our FDA although I do not know what percentage has occurred in that order.

Are you're saying is that this instance of an illegal GM wheat is just the tip of the iceberg?

It may be the tip of the iceberg. We simply do not know because testing for contamination from experimental field tests is minimal and possibly non-existent for experimental genes that do not have a commercial counterpart. We are in the dark about that, and I find that troubling.

Monsanto says its field trials of Roundup Ready wheat in Oregon were conducted on spring wheat and not winter wheat. What is the difference and how does it exonerate Monsanto?

I do not believe that Monsanto’s statement exonerates them or implies somehow that this is not widespread. First, if this GM wheat is in the seed supply, it is not necessarily from a field trial in Oregon. That seems to be an assumption that some are making but I see no reason that this would necessarily be the case. It could be from other trials in the US northwest, which produce similar types of wheat, or even elsewhere. I have seen nothing so far to suggest that they have not tested in other types of wheat. And in any case, a spring wheat might contaminate winter wheat although there are a few aspects related to germination and time to maturity that could make that less likely, but may not rule it out.

According to news agency reports, Monsanto "conducted at least 279 field tests of herbicide-resistant wheat on over 4,000 acres (one acre equals 0.4 hectare)”.  That seems like a lot to us in India. Is this the norm for field tests in the US?

For crops like soybeans and corn, it is very much higher. For most crops, like vegetables that are grown commercially on smaller acreage, it is much lower.

Is the USDA equipped to ensure there is no contamination from such field tests?

No, as I explained earlier. It is hard to predict how often it may occur, but it has been detected a number of times when, unlike for most experimental genes, someone actually looks for it. Most of the prominent incidents of contamination in the past, for example, Liberty Link 601 rice, BT10 corn, have been detected because there were tools to detect it, and people were looking for these. For experimental genes that have no commercialized similar counterpart we would not know about possible contamination.

What are the lessons for India from this? If contamination could occur in the US what are the chances it won't happen here or in other countries?

It is very difficult to have a high confidence that contamination will not happen. A number of things would need to be done differently during field trial than countries typically require—and it would be more costly.