For a growing section of riders, e-bikes are a cool way out of increasing fuel costs. Naveen Munjal’s firm Hero Electric leads India’s e-bikes market. The bungee-jumping entrepreneur, who heads the Society of Manufacturers of Electric Vehicles, told Vivek Chattopadhyaya e-bikes could be slicker. Excerpts 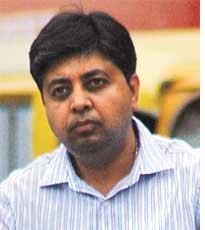 On the market potential of e-bikes

At a time of fast depleting fossil fuel deposits, e-bike is the future of transport. It is particularly important for India as the country’s fuel import bill is increasing every year.

The e-bike market can be divided into two categories: high-power bikes and low-power bikes. Low-power bikes have a maximum speed of 25 km per hour and hence do not require registration or a driving licence. At present, these bikes constitute about 75 per cent of the electric two-wheeler industry in India.
The growth of electric vehicles (including cars) has been encouraging over the past two years. Even then, e-bikes command less than two per cent of India’s two-wheeler market. But this share is estimated to go up to seven to 10 per cent in five years.

On the lack of regulations

Electric vehicles including e bikes require effective regulations covering their road worthiness, safety features, recycling of battery and end-of-life regulations that mandate use of recyclable materials in manufacturing of vehicles. Some established companies comply with these on their own. But a large number of unorganized players are taking advantage of the lack of stringent testing procedure under arai certification process. (Automotive Research Association of India is the apex body for vehicle certification.)

Most of these unorganized players import e-bikes and sell them in the country. They do not have service back-up or regard for quality, which is critical for any automobile. Many do not have adequate spare parts. Market observers feel these can create a negative image in the mind of the consumer. I feel all this can affect the growth of the e-bike industry.

The Society of Manufacturers of Electric Vehicles (SMEV) has recommended the government discourage import and instead encourage domestic production of e-bikes. The certification process should also be expanded for basic quality checks, particularly on the components, to ensure that the customer gets a fair deal.

Compared to petrol and diesel-run vehicles, electric vehicles are 97 per cent cleaner and have no tailpipe emissions. Since they don’t have half the parts used in conventional vehicles, there is little risk of shedding worn out parts such as radiator hose and fuel filter and leaking contaminated oil. E-vehicles are exceptionally quiet. They do not cause noise pollution. They are cheaper too. If one takes into account the cost of the vehicle and its running, maintenance and battery replacement cost after one year, the saving from an e-vehicle is 60 per cent compared to a vehicle with an internal combustion engine.

On the use of lead acid batteries

Automakers including electric vehicle manufacturers mostly use a lead acid battery because of its low cost and easy availability. But we are aware of the concerns regarding usage and disposal of these batteries. To check the mishandling of battery waste and substandard production processes, SMEV has been working on modalities of recycling lead-acid batteries with authorized smelters and preparing a plan of action to ensure back-end support. Recycling is an essential part of our contract with domestic battery manufacturers like Exide. We will pay dealers for replacement batteries provided they collect the old ones from the customers and send them back for recycling.

Battery manufacturers across the world are working on technologies, which would have higher energy and power densities. Researchers in India are evaluating nickel metal hydride and lithium ion batteries for their use in electric vehicles. These are environment friendly, have longer life and better performance and charge quicker. Many of these technologies are already in use globally.

Future energy efficiency norms would mean setting a minimum standard for electric-drive train, which includes batteries, motors and electronics. Energy efficiency of a vehicle increases up to 60 per cent solely by replacing the internal combustion engine with a battery-powered motor.

On the government’s role

The government has helped kick-start the electric vehicle industry. But full support is needed to promote these vehicles as the clean and green mode of transport and for further research and development. To encourage manufacturers there should be tax rebates such as subsidies, excise duty waiver and value added tax exemption. A network of charging stations also needs to be established. We also require support in establishing a network of charging stations in public and private places like parking lots, commercial complexes and institutions.

On his company’s marketing efforts

Direct marketing can take e-bikes to greater heights. Hero is trying to educate customers. We believe in such initiatives; there is always room to minimize losses.