'37% of natural springs, which contribute directly to the Ganga, are drying up'

Increasing instances of extreme rainfall are slowly leading to the crumbling of the Ganga's catchment area, says P C Tiwari, professor of geography at Kumaun University 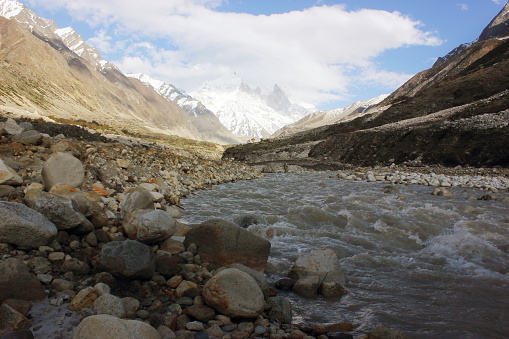 Your research shows that Ganga is losing water. Other findings also show that some of the catchment areas are becoming arid. When did this process start?

Kumaon Himalayas witnessed rapid population growth after 1961. Despite the increase in population, the community has only one source of livelihood, which is subsistence agriculture. There are no other means of livelihood in the mountain region. Only 35 per cent of the area in the region produces food. People were left with no option but to increase their agricultural lands. As a result, swathes of densely forested areas and protected areas came under cultivation. This brought about major changes in the land use pattern which led to rapid degradation of forest resources in the region.

For example, around 62 per cent of land is under forests. But if you look at the latest Forest Survey of India data, actual forest is 34 per cent. There are forest lands but they are without tree cover.

How did it lead to depletion of water resources?

Our agriculture is forest-based agriculture. The people in Uttarakhand largely depend on forests for fuel wood and fodder. The manure produced by cattle enriches the land. From 1965, forests were cut both for agricultural and industrial purposes. Paper pulp and construction industries depended on the trees from these forests. As more forests were brought under agriculture, the water-holding capacity of the soil decreased, leading to more surface runoff. Groundwater recharge started getting impacted as forests facilitating recharge were cut rapidly. That’s how deforestation brought about large-scale depletion of water in Ganga’s catchment.

Among all hilly states in the country, Uttarakhand is considered as the most urbanised. However, we do not have any urban land use policy. Urbanisation is totally unregulated, unplanned and unsustainable. Although Nainital and Mussoorie have land use plans for urban areas, they have not implemented them. Due to rapid urbanisation, cities and surrounding areas are becoming highly vulnerable and at the same time, reduced groundwater recharge and increased surface runoff have increased the rate of floods in these areas. That is why springs and streams are drying too, which contribute up to 90 per cent of water to the Ganga.

What is the rate of decline?

Second category includes those first order springs which were perennial but have changed into second order or seasonal springs. Up to 8 per cent of springs have become seasonal. This is the reason why the catchment of the Ganga is becoming arid. This impacts the availability of drinking water, water for sanitation and irrigation.

How are the geological processes impacting the catchment areas?

The Himalayas are one of the four youngest mountain ranges in the world. Three major thrusts on the Earth’s crust led to the formation of three parallel ranges of Himalayas. Besides these three major faults, there are thousands of minor faults, which make it a geologically active mountain range.

The Himalayas are a sensitive mountain range. Even without human intervention, there are tectonic forces at play. Subsidence and upheaval are typical of this range. It is not a geologically strong region. To protect a geologically or tectonically active area, we need forest cover.

For example, the native oak trees retain about 60 per cent of the water. Lack of groundwater recharge increases the surface runoff. With increase in the surface runoff, slopes of the mountains become weak. Such slopes become even more vulnerable to tectonic activity, posing danger to humans living nearby. These activities also increase landslides and soil erosion.

How has the change in the Ganga's catchment area affected the hydrological cycle?

Due to a decrease in groundwater recharge and increase in surface flow, more sediment is eroded and transported. There is more erosion of soil and landslides in the mountains. This sediment is deposited in the foothill region or in the plains. The rate of siltation as it enters from the foothills to the plains is increasing. Increasing siltation is reducing the depth of the river. The water-holding capacity of the river is declining. As a result, the frequency of floods is increasing even with decreased rainfall.

Why has there been an increase in the number of extreme weather events in the Himalayas? What are the factors and how are they changing?

There are two types of climatic events—high intensity rainfall and drought. Both are increasing. High intensity rainfall has increased in the last 20-30 years. The monsoon pattern has changed in the region. In the month of April, Uttarakhand experienced extreme rainfall quite unlike what had been witnessed in the last 100 years. Because of climate change, we are experiencing both these events simultaneously.

What should we expect in the future?

There are projections that by the year 2050, 20 per cent of Ganga’s water will decline. Frequency of high intensity rainfall is going to increase in the Himalayan mountain system. Unless we have a land use policy, there will be no way to revive the hydrological cycle and we will have to keep dealing with more disasters. Spring recharge programmes and conservation-oriented land use should be encouraged across the Himalayan mountain range.