S P Udayakumar, coordinator of Peoples’ Movement Against Nuclear Energy, has been spearheading protests against the Kudankulam Nuclear Power Plant for almost two years now. He has recently decided to contest the Lok Sabha elections on the Aam Aadmi Party (AAP) ticket from Kanyakumari, Tamil Nadu. His village, Idinthakarai, is located close to the nuclear project site and has never had any elected representative in the legislature till date. In an interview to Anupam Chakravartty, Udayakumar explains why he chose to enter politics. 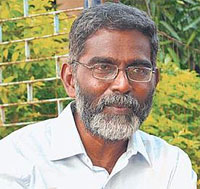 Idinthakarai recently banned campaigning for the Lok Sabha elections in the village. How will the decision impact elections?

It was a collective decision not to allow campaigning by outsiders. This was to avoid any major regional or national political party from influencing people living near the Kudankulam nuclear plant. The people of Idinthakarai have been protesting against the plant for over 960 days. The village does not have any of its own elected representative; anyone who comes here to campaign will be an outsider. For example, the village might have a few supporters of the AIADMK or the DMK. If we allow them to campaign, they may create a rift in our struggle against the plant. We do not want that to happen. Therefore, it was decided to ban any kind of political campaigning in the village. To keep it fair, the ban was also extended to the AAP.

However since I live in Idinthakarai, the village that has suffered the most due to the plant, we can always campaign here. I am not an outsider here.

Why did you decide to join the AAP?

Last year, we had approached a few small regional political parties seeking their support. Though parties like MDMK, PMK, MMK, VCK supported us, they were more keen on forging alliance with major political outfits and remain in power. We did not approach the Congress or the BJP because it is very clear that both the parties favour expansion of the nuclear project. We wrote to Trinamool Congress, Bahujan Samaj Party and Janata Dal (United), which can become alternatives to the Congress or the BJP. None responded.

AAP was the only party to believe in what we have been saying—that the government cannot push any mega project without people’s consent. In 2012, Arvind Kejriwal visited Idinthakarai and expressed solidarity with our movement. AAP leader Prashant Bhushan has been arguing our case in the Supreme Court. In December 2013, he visited Idinthakarai and met those fighting the cause. He proposed that we should join the AAP. Thereafter, we held discussions in January and February, prepared a list of conditions and sent it to the party. It agreed with most of them. That’s when a few of us joined the AAP.

What were the conditions? What did AAP accept?

They accepted most of the conditions. We had demanded a wider debate on the nuclear policy and that everybody should have a voice in the discussion. We wanted that inputs from all parts of the country should be included in party policies. We had also stated that the party should take our inputs in designing any policy related to the Tamil Eelam, fish workers and fishing communities’ rights in Tamil Nadu. Our other condition was that mega projects cannot be passed without people’s consent. AAP agreed with these and supported us. It also allowed us to use ‘Aam Aadmi Kachi’ as the regional party name for campaigning purpose. However, officially we will use the name Aam Aadmi Party. The party did not agree with our condition to build regional or local alliances with minor political players. This may be because it would mean exposing the party to the kind of politics that AAP does not favour.

Prominent faces of Kudankulam agitation like M Pushparayan and R S Muhilan decided to stay away from AAP. How have other supporters of the movement reacted to your decision?

That is true. Initially, Pushparayan and Muhilan did not join the movement. However, Pushparayan has recently joined AAP and is contesting the elections from Tuthukudi (Tuticorin). Muhilan continues to work for the cause and has decided not to join the AAP. As far as reaction from other supporters is concerned, there was always a plan to take the struggle to the next stage.

You are contesting from Kanyakumari, which has been a Congress bastion for years. Do you see this as a big challenge?

It is a big challenge. Big political parties can go to any extent to win the elections. People in Kanyakumari are very educated and know this. Many are tired of all these parties. I hope that the first-time voters in Kanyakumari will take into account my determination and honesty in the struggle.

What other issues are you looking at as you contest from Kanyakumari?

Sand mining is a big problem in this part of the country. There is rampant beach sand mining of minerals from coasts by Indian Rare Earths Limited and private parties, causing extensive economic as well as ecological loss. Irrigation and revival of ponds and a policy for de-siltation of reservoirs are a few other concerns. We are also insisting that people should protect their paddy fields from land and real estate mafia in these areas. Forest rights vis-à-vis protection of sanctuaries is another cause we are devoting our energy to as decisions taken by the government to declare areas as sanctuaries have serious implications on people staying there.

Another important issue is that of fishers. Many of them go missing in the high seas. There should be a dedicated search and rescue team for them, comprising infrastructure like helipads and speed boats. We want to promote tourism in our areas, which has been neglected. We want to promote a sustainable development through protection of environment. We also wish to fight communalism.