'We are using the sea as a dustbin'

The Indian coastline no longer belongs to its traditional custodians—the small fisher people. A jamboree of development—cities, SEZs, power plants, ports, sand mining—is eating up the coastline and eroding it beyond repair. Leading coastal fishermen against a proposed nuclear power plant at Haripur in West Bengal, Debasis Shyamal got sucked into a public movement at his doorstep. Later, as member of the National Fishworkers' Forum (NFF)—an apex body of marginal fishers uniting many a local movement—he travelled along India's coastline, witnessing the plight of fisher communities, from Gujarat to West Bengal. Earlier this month, NFF created its youth platform, Yuva, to bring forth the second rung of leadership within the organisation. Shyamal along with Malisa Simoes from Goa, took over as conveners of the youth wing. Sayantan Bera spoke to him in Kolkata on the present and future of traditional fishers 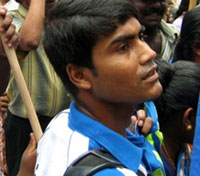 How did you begin work with fisher communities?
My house is 20 minutes from the sea and fishing is the primary occupation in our family—my father dabbled in politics but all his brothers were small fishermen. I had seen much poverty in life and wanted to move out, even worked as an insurance agent, but things changed after meeting Harekrishna Debnath, then president of the National Fishworkers' Forum (NFF) who came to our fish landing centre with a simple slogan: protect water, protect coast, protect coastal people. I would intently listen to him and then travelled with him across the country. In 2006, the news of the proposed nuclear plant at Haripur next to our village changed everything. We successfully prevented the chairperson of Nuclear Power Corporation from visiting the site; the movement grew with massive support cutting across political lines. In the forefront were coastal fishers.

What are the problems facing small fishers?
The main problem is depletion of fish stock and the fear of losing one's livelihood. Small fishers mostly fish within 10 km of the coastline where the problem is most acute. Destructive over-fishing by mechanised boats and trawlers—using mono-filament and purse seine nets, GPRS mapping—is robbing the sea of its fish stock and biodiversity wealth. Small fishers treat the sea with respect—they would never fish during the full moon or new moon. During monsoon when the fish breed they stop fishing. Profit-oriented mechanised fishing does not follow these traditions.

Another reason for depletion of stock is the sheer number of development projects on the coastline, be it industry, ports, nuclear power plants or tourism. We are using the sea as a dustbin with effluents flowing freely and affecting the fish population near the coastline. By 2040 we might not have any fish left in the sea.

How has government policies impacted fishing?
We resisted the coastal management zone notification which tried to open up the coastline to development projects without recognising the customary rights of fishermen. It seems endless—in Tamil Nadu they are building thermal power plants at 5 km intervals on the coastline, in Gujarat mangroves are destroyed for Adani Port and SEZ, in Kerala tourism is doing the damage.

In marine protected areas and sanctuaries the small fishers are pushed away. For instance, in Jambudwip in Sundarbans 10,000 transient fishers have lost their livelihood. Fishing communities must have their rights in line with the Forest Rights Act of 2006, but policy-makers are out of touch with reality; they are destroying on one side and trying to conserve on the other, and its the coastal communities who are suffering.

Are youth from fisher communities interested in these issues? What is the genesis of NFF's youth wing?
Youth have been at the forefront of our struggle—in Haripur in West Bengal, Jaitapur in Maharshtra, Kudankulam in Tamilnadu—still many are trying to eke a living, migrating to faraway cities to work as construction labourers. Some are forced to work in mechanised trawlers.

The 2010 general body meeting of NFF passed a resolution to bring in a youth platform, organising youth to create a second rung of leadership, to maintain the momentum of the movement. In the last few years a large number of the youth from fisher families joined the movement, protesting development projects and loss of traditional livelihood.

You have presented these issues in international fora. What problems are fisher communities facing in other countries?
Last year I travelled to Bangkok and Bangladesh as an executive member of NFF. In south east Asia and Bangladesh, the problems are similar—depleting fish stock and loss of livelihood of small fishers. I was happy to find that Philippines has 500 marine protected areas, but unlike in India, these are protected for traditional fishers.

How is climate change impacting small fishers?
Earlier we could predict an approaching storm by looking at the cloud, the moon and the water level in the sea. Now storms come all of a sudden—we cannot seem to predict the weather any more. The rise in water levels together with development is eroding the coast and changing the ecological balance of the sea. The sea is losing its biodiversity—small catch like ribbon fish or Bombay duck is depleting, the famed Hilsa is almost lost from the Bay of Bengal.

So, where are we headed?
We need to remind ourselves that small-scale fishing is a zero investment industry which supplies the poor with the cheapest source of protein and that depletion of fish stock is a national problem. Compare this to the abundance of chemicals, antibiotics and hormones in commercial aquaculture which is contaminating and converting more and more agricultural land into fish farms, thereby worsening the food security situation.

We strongly believe if the rights of fishing communities are restored, if their culture of moderation followed instead of greed, the world would be better off economically, environmentally and in terms of biodiversity. If we go on like this, an entire mass of people will be wiped out. The worst is already here, fishing villages in Kendrapara in Odisha are falling prey to prostitution after losing their livelihood, fishers in my district of East Midnapore are committing suicide.