We still have to reach the interiors

W Selvamurthy, senior scientist at the Defence Research and Development Organisation (DRDO), shrugs off the body’s responsibility towards civilians in tackling chemical, biological, radiological and nuclear (CBRN) disasters. He speaks to Sonal Matharu on the sidelines of a conference in New Delhi 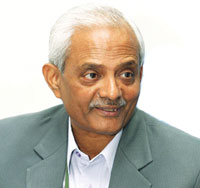 What steps have been taken to ensure civilian safety vis-à-vis CBRN disasters?

The government has recently approved a national training centre for CBRN mitigation. It will train not only the military and the paramilitary but also civil agencies, the first responders when disasters occur. This centre will have a simulation, modelling and emergency response system. Like a war planning room, it will acquire all the information about the disaster site, the roads affected due to it, and the hospitals present around it through a digital mapping system. Officers at the centre will formulate a response strategy and disseminate instructions to the disaster site.

The centre, to be set up at Panipat, will be part of the Institute of Nuclear Medicine and Allied Sciences at DRDO.

Occupational health hazards that occur among uranium miners are the responsibility of the National Institute of Occupational Health. The level of radiation is less at extraction sites than at areas where treated uranium is kept. In mining areas the ore is not present in a concentrated form.

Natural radiation is not harmful. At places like Karunagappally in Kerala, radiation level from the existing thorium containing monazite sand is very high. Over a period of time, people have genetically and physiologically adapted to it. However, if incidences of cancer or thyroid are reported, they will be referred to the DRDO.

At present, does India have enough manpower to tackle CBRN disasters?

For a country that has a population of 1.2 billion, at least one lakh trained people are needed to tackle a disaster. We recently trained and equipped a number of people in the military, and are now trying to build capability and capacity among the civilians through NDMA. The National Disaster Response Force also recently trained a few people. However, we have still not reached the interiors. Trained people are needed close to the disaster site so that they quickly respond.

DRDO has equipment that can be taken to biological disaster sites to detect the virus causing the trouble. Why is it not used at places where successive epidemics occur?

DRDO, Indian Council of Medical Research (ICMR), Department of Biotechnology are the three major agencies which develop such technologies. It is ICMR that takes care of epidemics like the Japanese Encephalitis which recently spread across many states in the country.

We also need a robust network of reporting system so that a disaster, even at a remote location can be easily reported to a Central repository like the health ministry or ICMR. A mobile-based information delivery system can be very effective.

The government’s planned national knowledge network, that will interlink research institutes for data sharing, will be a big boon. Cloud computing technology can also be used to handle huge database. This can later be transmitted to the central database.