Wildlife filmamker Ajay Bedi talks to Down To Earth about his recent documentary, 'The Secret Life of Frogs' that released commercially recently

Wildlife filmmakers Ajay and Vijay Bedi come from a family that is steeped in the profession. Recently, their new offering, The Secret Life of Frogs was released commercially. Ajay Bedi spoke to Down To Earth about why frogs are important, the challenges of filming these animals and the state of wildlife in India. Excerpts:

Why did you decide to focus on frogs for this particular project of yours?

We (Vijay and I) have been in wildlife filmmaking since very young. Since then, we have worked on many films. Recently, it was suggested to us to make a film on frogs. During our research, we found that not much work has been done on them. People don’t know much about frogs except that they have seen them during childhood, at the time of the rains and they look cute and cuddly. We thought it was a good time to change this perception and find out more about them. Also, we have selected subjects to work on in the past which have been very challenging. During our research, we found that frogs fitted into this category.

Were you a bit apprehensive when you selected frogs as the subject, that your film would elicit lesser audience interest than your films on megafauna?

Our film is one of the first on Indian amphibians, looking at some of the endangered and critically endangered species. We were extremely lucky to capture behaviour that has never been seen before. Through this film, we are trying to give the viewers the message of awareness that frogs do exist and there is a need to conserve them because they are very important for the ecology and our own existence as humans. Also, it is not just the tiger or the elephant; frogs are also beautiful. They began life during the age of the dinosaurs and have survived and thrived amid countless vicissitudes. There is a lot to learn from these little creatures and now is the right time to conserve them. 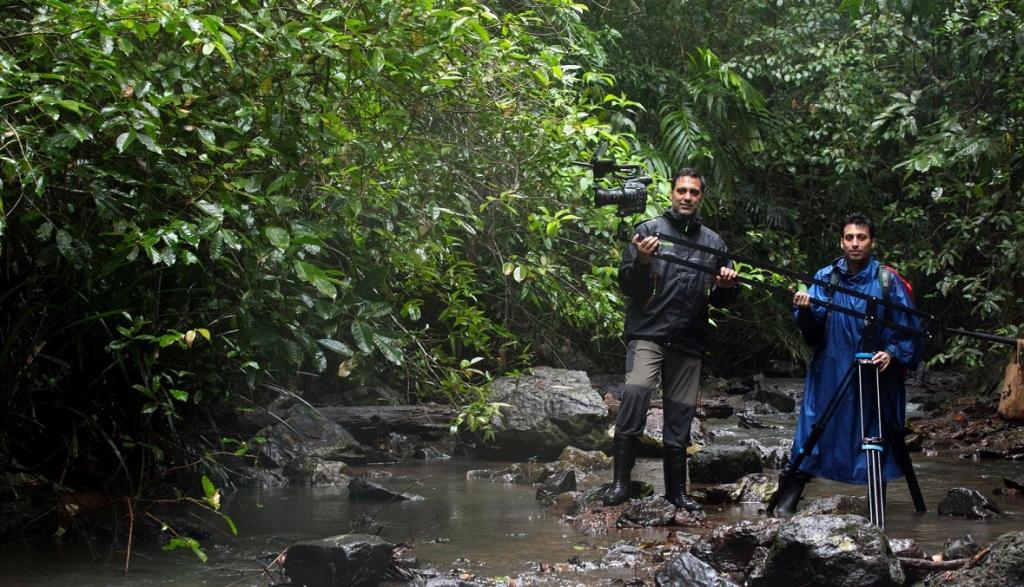 How was the filming experience? Since frogs live in spaces like waterbodies, puddles, trees and others which are not easily accessible to humans, what were the challenges during filming?

In terms of filming, we had to both, physically and technically prepare ourselves. We were lying down straight most of the time, that too in running water such as streams. We were totally drenched. Also, the sheer size gap. One of the species we documented was just 30 mm in size. That is the size of a thumbnail. To actually observe them was extremely difficult because if disturbed, they could easily hop away in a moment of an eyelid.

Frogs are very sensitive to light. The only way we could film them was in red light, which was not ideal for filming. It took us a long time to habituate them to our presence as well as normal lighting.

Another challenge were blood-sucking leeches. At the end of the day, Vijay and I used to go and pull them off our bodies one by one.

It was extremely challenging to observe every moment of these animals about who, not much is known, in wet, tropical forest, where it is usually raining all the time.

What are your thoughts about this film appearing at a time when frogs are facing the deadliest enemy they have ever known — a fungus that eats away their skins?

I think this is the right time. This film was required since people do not know that frogs play an important role in ecology. People should see frogs in action. Once they do that, they will start talking and discussing. That is when the conservation process would start.

While new frogs are being discovered every day, their population is also declining. One-third of the world’s amphibian species are threatened with extinction. A number of species have disappeared since 1980 due to a number of problems such as pollution, infectious diseases and climate change.

As you rightly said, frogs are today threatened by this fungus. They also have extra limbs, missing nails or eyes. The scientific world as well as the public have to work together to find a solution to disease like the fungus so that it does not spread to us. For what can spread among frogs can spread among humans too.

Both of you come from a family of wildlife filmmakers. How different are the challenges that you face while filming wildlife in the India of today from what, say, your father and uncle faced?

Technology has changed a lot. The cameras have changed. They are now more sensitive to light. When you are filming animals, you require less light. The lesser the disturbance, the better the shot.

However, the basic ethics and understanding remain the same. One has to keep in mind that during wildlife filmmaking, the animal has to be respected. That is because as a filmmaker or researcher, you are going into its territory.

Also, because technology is so simple now, everyone feels that they can venture out and make films. That is good. But I would also add that when one ventures out to film animals, s/he should not only have technical knowledge of the camera but also about the behaviour of the animal they are filming.

Will India’s wildlife survive the onslaught that it is facing right now so that filmmakers like you can continue to profile them and reveal whole new worlds to millions?

Yes, animals will continue to survive in India’s protected areas. But the government needs to patrol these areas constantly because poachers are usually one step ahead. Besides these, areas outside protected areas also have to be protected. Government should either declare them protected or consult and collaborate with scientists and people to find solutions to human-wildlife conflict in such areas. Infrastructure projects like big dams or roads should be only made if all stakeholders agree to them. Environment and development should be balanced.