Guim Valls Teruel and his wife Nguyen Thuy Anh travelled across 14 countries on hybrid solar electric bicycles before landing in Delhi. Between cycling, organising press conferences and planning their next move, the Spanish-Vietnamese couple talk to Arushi Mittal about their experience 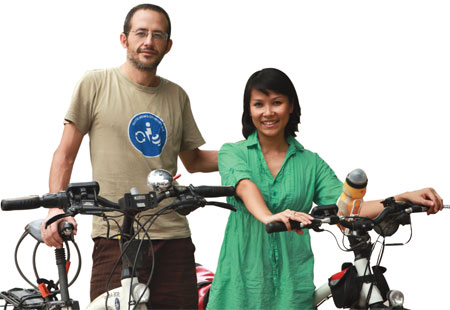 What inspired your journey?

Teruel: I discovered electric bicycles while living in Beijing. For two-and-a-half years I used it to commute to work. In 2009, I woke up with a mind to go around the world on an electric bicycle. It was the mix of my passions—travelling and electric bicycles. I realised the project was feasible, researched on it, quit my job and started cycling.

How is the bicycle scene in Beijing?

Teruel: There were 125 million electric bicycles in China in 2009. Bicycle lanes there are huge. They can accommodate 5-10 cyclists next to each other. In Beijing, for instance, there are three car lanes, and a bicycle lane of the width of the car lane. My friends there were surprised when I told them I wanted to promote electric bicycles. They could not believe that in the rest of the world, people do not know much about electric bicycles.

Is cycling in India a pleasant experience?

Teruel: If you have never been in Asia you’ll probably be terrified. But if one is coming from China, in my case cycling across Vietnam, it seems normal. I was not really surprised by Indian roads because people behave the same in the rest of Asia. Here, people go quite slow. In developed countries, people follow the rules but go much faster, which is more dangerous.

How do people react to you on road?

Thuy: They are curious because we cycle and carry a trailer with a solar panel. They check out the bike and want to know how it is different from Hero cycles. I guess this is a good way to show them electric bicycles and tell them their lives can be simplified by using them.

How do electric bicycles score over the regular ones?

Teruel: For me, environmental advantages of electric bicycles are important. But the main point is all those who do not even consider using a bicycle for their daily commutes change their mind, once they jump on an electric bicycle. All the problems associated with biking disappear with electric bicycles. You go fast, skip traffic jams, charge it anywhere, carry as much load as you need and exercise at the same time. It is funny how every time you ride it, you feel happy, you feel like a superman.

Which other countries, except China, are using them?

Teruel: It is difficult to change people’s mindset. In Vietnam, for example, people used bicycles earlier. Now, they move on motor bikes as it improves status. In Spain, people use electric bicycle as it is cheaper and petrol is expensive, and the economy is stagnating. Also, with electric bicycles, you do not have to pay insurance or get a licence; very few do it for the environment.

How can India promote them?

Teruel: In India, electric bicycles are expensive when compared to bicycles. But there are conversion kits, which are a lot cheaper and will soon be available in shops here. The government should subsidise the kits. Also, you do not need to carry solar panels around the city like we do. You can charge it on your roof. Solar panels should also be subsidised. Thuy: One of our friends from Kolkata, who was amazed after he tried our bikes, bought a normal bike and an electric kit to convert it into an electric bike.

What's your next plan?

We will fly to Greece. Until now we have been covering almost all the costs of the project with our savings. Now, we are running out of them. We need support but won’t give up. We will find a job somewhere if we run out of money and then resume the journey. We will reach the US probably by 2050.