Zurich’s Dr Dolittle is a lawyer

ANTOINE GOETSCHEL, 51, is a Swiss government advocate for animals. A specialist in animal welfare law for 25 years, he explained to SUMANA NARAYANAN over the phone why animals need legal protection. Excerpts 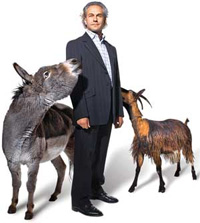 On the position of animal welfare attorney

The office of animal welfare attorney exists only in the canton of Zurich in Switzerland. It was created because no one stands up for the animal. We have animal welfare legislation but if you complain the case is unlikely to be taken seriously. This post was created 19 years ago to ensure that the accused can hire an attorney and the animal’s interests are protected.

On the success of the office

It has worked very well. In fact, people like the state attorney and state veterinarian, who opposed the idea 19 years ago, are now in favour of the institution. Since I took over the position (in November 2007), there have been about 150 to 200 cases of animal mistreatment every year. In other cantons there have been just one or two cases.

Switzerland has one of the strongest animal rights laws. The recent amendments to the law (in 2005) introduced two new concepts. One that the dignity of animals must be protected. This goes beyond the idea of protecting animals from only suffering and pain. The only other country with this idea in its legislation is South Korea. The other concept is that social animals like birds, fish and guinea pigs cannot be kept in isolation.

On the March 7 referendum

The referendum was to decide whether this position (of animal welfare attorney) should be replicated in every canton. Unfortunately, the majority of the people thought we should wait and see how the recent amendment works. People have no problem with legislation, but do not care for the law being applied. Farmers don’t like it being applied against them.

After I finished law school, I happened to help a friend collate pieces of legislation regarding animals for an animal rights group. A book of 700 pages was the outcome of three months’ research. I wrote a legal thesis on the subject. Later, I heard about Gandhi’s ideas on human relationship with animals indicating the moral level of a society. This made me turn vegetarian. I believe animals are the weakest part of society, completely dominated by vested interests of humans.

I have seen about 400 cases. They range from people locking up animals to causing pain to animals while hunting. Currently, I’m working on a case where a man killed a horse with a knife but not before carving meat out of the dying horse. Twenty years ago this would not have been taken seriously. Then there was a case of a man who went out of town for several days, leaving his cats locked up in the kitchen. Two died of hunger and the third started eating the dead ones. One of the strangest cases was one where a man went to a brothel and asked the prostitute to push hamsters up his anus. They died in the process.

On the controversial pike catch case

This was just before the referendum. A fisherman had caught a 20-pound fish and he was proud of this victory over the pike. He told a reporter how tough the struggle was. Some animal lovers felt offended by his demonstration of dominance over the fish. An animal rights organization complained he had abused the fish. The state attorney was not willing to decide the case himself so it went to court. The court decided in favour of the fisherman. Most people would not feel sympathetic towards a fish but if this had been done to a puppy or a cow, it would have offended them and they would have called it abuse.

On whether the law should cover all living beings

Legislation stops at vertebrates. We are still discussing invertebrates and plants. Perhaps in 10-15 years we might reach a conclusion.