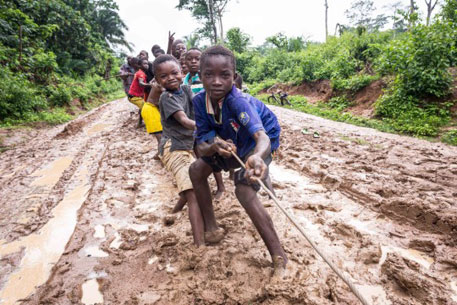 The report notes that progress such as the decline in the poverty rate, along with maternal and child mortality, can be reversed by humanitarian crises like the recent Ebola outbreak. “Even after societies recuperate, the potential for development remains impaired long after the crises are over, as human capital is depleted and institutions are weakened,” it says. The deadly Ebola disease, which started in Guinea in West Africa in December, 2013, and spread to other countries, including the US and Spain, has killed more than 4,000 people worldwideand affected at least 10,000 (Read: “Ebola unleashed”). “Our sisters and brothers in Liberia, Guinea and Sierra Leone are facing grave challenges as they fight and battle Ebola, which over the last few months so abruptly halted their path towards development and reconstruction,” African Union Commission chairperson NkosazanaDlaminiZuma said during the launch of the report, according to a UNEP press release.

The report was launched at the ninth African Economic Conference held at Addis-Ababa, Ethiopia, from November 1-3. This year’s theme is “Knowledge and innovation for Africa’s transformation”. A key goal of the conference is to examine the best ways in which knowledge and innovation can be used to boost youth employment and foster the adoption of new technologies.

Challenges ahead and way forward

The press release states that in the recent past, particularly from 1995-2012, Africa has made considerable progress on health-related MDGs. Strong political will, focused interventions and increased access to antiretroviral therapy helped to bring down HIV/AIDS prevalence from 5.8 to 4.7 per cent. Maternal and child mortality have declined by 47 and 44 per cent respectively (see ‘Mobile technology to be used to improve maternal and child health in Africa,’).Meanwhile, incidence of malaria and death rates related to the disease fell by an average of 31 percent and 49 percent respectively in southern, east, central and West Africa as a whole.

This is significant development, but their continuation is threatened by conflict, political instability and natural or man-made disasters. ”The challenge is to make sure Africa, supported by international partners, continues to invest in the sectors that make a difference in the daily lives of people”, the press release quotes Abdoulaye Mar Dieye, UNDP’s director for Africa. A healthy and educated population, stronger communities, inclusive decision-making, better local service delivery and vibrant economies and businesses are needed for Africa to continue to forge ahead, he adds.

Stronger partnerships and domestic financing, with support from the private sector, are key to furthering improvements in living standards. “The private sector has a huge role to play in finishing the business of MDGs and sustaining progress beyond 2015. In fact, part of the work will consist in making sure future investments are safeguarded in the face of crises like the one we are seeing in West Africa,” said Donald Kaberuka, president of the African Development Bank.

Another way to deal with crises is to become self-reliant and reduce the dependence on foreign countries for monetary aid or medical emergency. “Making sure African economies can transform, diversify and become an engine for job creation and empowerment of communities is crucial to achieving long-term social progress,” Carlos Lopes, executive secretary of the Economic Commission for Africa, said at the meet. The authors of the report believe that technology, research and development and public-private partnerships have an important role to play in creating dynamic economies and societies and ensuring that countries in Africa can continue to make progress.

The African Development Forum, held in Morocco last month, identified the need to mobilise domestic resources to cut the dependence on foreign aid (see ‘Resource mobilisation can help Africa be self-sufficient’). This observation assumes significance given the rapid cuts in monetary and food assistance  by global organisations like the United Nations. African countries must ensure their people do not suffer or the economies do not relapse to a stage of low growth when faced with such contingencies.

According to the United Nations Development Programme, Africa is currently on track to meet the primary school enrolment and gender parity targets, with 25 countries achieving net enrolment ratios of 80 per cent or above. Gender equality is also on the increase in national parliaments, with the continent ranking third in the world.